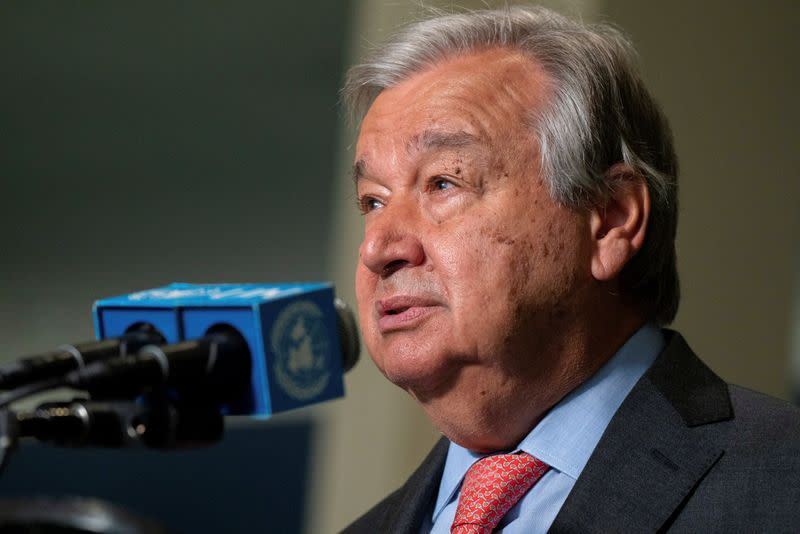 UNITED NATIONS (Reuters) – United Nations Secretary-General Antonio Guterres on Wednesday denounced the “grotesque greed” of oil and gas companies and their lenders and urged governments worldwide to “tax these excessive profits” to support the most vulnerable people.

“It is immoral for oil and gas companies to reap record profits from this energy crisis on the backs of the poorest people and communities, at a huge cost to the climate,” Guterres told reporters.

The two largest US oil companies, Exxon Mobil Corp. XOM.N and Chevron Corp. CVX.N, British Shell and France’s TotalEnergies combined earned nearly $51 billion in the most recent quarter, nearly double what the group brought in a year ago. .

“I urge all governments to tax these excessive profits and use the funds to help the most vulnerable people through these difficult times,” Guterres said.

“And I urge people everywhere to send a clear message to the fossil fuel industry and their financiers: that this grotesque greed punishes the poorest and most vulnerable people, while destroying our only common home,” he said.

Politicians and consumer advocates have criticized the oil companies for taking advantage of a global shortage of supplies to over-fatten profits and gouge consumers. US President Joe Biden said in June that Exxon and others were making “more money than God” at a time when consumer fuel prices were hitting record highs.

Last month, Britain approved a 25% windfall tax on oil and gas producers in the North Sea. US lawmakers have debated a similar idea, though it has great potential in Congress.

ALSO READ  Some of Beirut's harbor silos, damaged by the 2020 explosion, collapse

“Many developing countries – drowning in debt, with no access to finance and struggling to recover from the COVID-19 pandemic – could be going over the edge,” he said. “We are already seeing the warning signs of a wave of economic, social and political unrest that would leave no country untouched.”