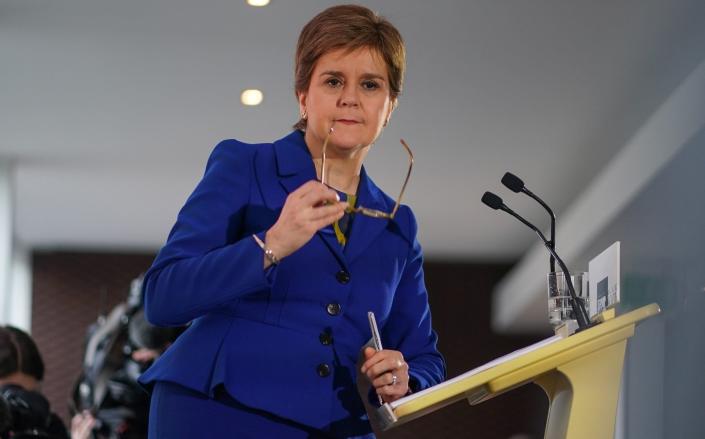 The United Nations has criticized Nicola Sturgeon for her teenage gender reform plans, saying they could endanger women’s safety.

Reem Alsalem, the UN Special Rapporteur on violence against women and girls, said the proposals “could open the door for violent men who identify as men to abuse the process”.

In a letter to James Cleverly, the Foreign Secretary, she said the Scottish government’s plans were “clear” about how people applying to change their sex would be monitored.

And she added, “Simplifying and speeding up the process doesn’t necessarily make it fairer or more efficient.”

“I share the concern that such proposals may open the door for violent men who identify as men to abuse the process of obtaining a gender certificate and the rights associated with it,” she wrote.

“This poses potential risks to the safety of women in all their diversity (including women born female, trans women, and gender non-conforming women).”

Ms. Sturgeon’s Gender Reform Recognition Act would allow children as young as 16 to apply to change their gender without medical checks.

The legislation also reduces the amount of time a person has to live in their “acquired gender” from two years to three months before receiving a Gender Recognition Certificate. An additional three-month reflection period is also mandatory for all applicants.

It is clear that Kemi Badenoch, the Minister for Equality, has concerns about Ms Sturgeon’s proposed approach.

In her letter, Ms Alsalem wrote that there was “insufficient clarity in the proposed self-identification procedure”.

“At the moment the Scottish Government is not specifying how the government will ensure a level of scrutiny over the applications made to obtain a gender recognition certificate under the new proposal,” she said.

“It is not unreasonable to expect the government to indicate the level of scrutiny under which the procedure will proceed, or to detail important aspects of it, including the specific steps involved in the procedure and the conditions for denying it. of such applications.

“Other governments that have adopted a self-identification procedure for the legal recognition of a gender identity have also done so. Simplifying and speeding up the procedure does not necessarily make it fairer or more efficient.”

She pointed out that MPs had previously called for “robust guidance” on how a system of self-declaration would work in practice, to ensure that male prisoners with a record of sexual assault or domestic violence who identify themselves as female are not transferred to a women’s prison.

Ms Alsalem added: “The Scottish Government’s ongoing efforts to reform existing legislation do not adequately address the specific needs of women and girls in all their diversity, particularly those at risk of male violence and those who have experienced male violence.

“It does not provide safeguards to ensure that the procedure is not, as far as can be reasonably assured, abused by sexual predators and other offenders. These include access to both single-sex and gender-based spaces.

She added: “It is important to note that the push for security and risk management protocols does not stem from a belief that transgender people are a security threat.

“It is instead based on empirical evidence showing that the majority of sex offenders are male and that persistent sex offenders will go to great lengths to gain access to those they want to abuse. One way they can do this is by abusing the process to access same-sex spaces or take on roles normally reserved for women for security reasons.

‘Financing must be protected’

The Special Rapporteur said she had been made aware of reports “indicating that no same-sex space is provided for female survivors of male violence, who because of their experiences do not have access to trans-inclusive services, leading to their self-exclusion from emergency and shelter services”.

“It is vital that service providers in Scotland remain able to provide both sex and gender based services, and funding should be earmarked for a specific segment of the single gender, balancing the needs of different demographic groups without conflicted.”

She concluded: “Although I have the [Scottish] government for listening to the voices of trans women, including organizations representing them, I am concerned that the consultations for this proposal appear to be insufficiently targeted at other groups of women, particularly female victims of violence.

“Five survivors of male violence are reported to have approached the Scottish Parliament’s Equality, Human Rights and Civil Justice Committee to speak in a private session about their concerns about the Bill and their own experiences of self-exclusion.

“The organizer reportedly informed the group that the committee did not have time to see them and put their objections in writing.”