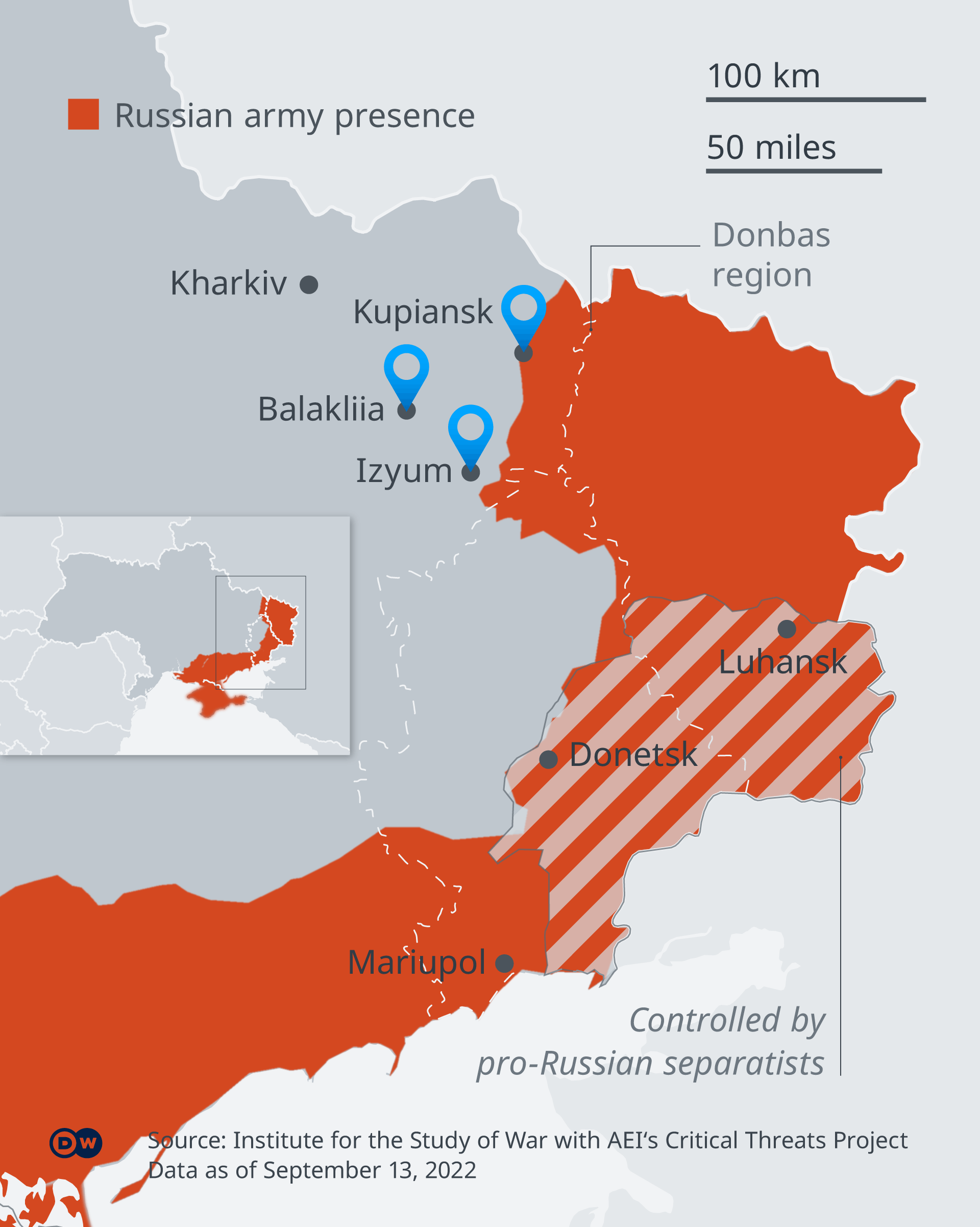 Ukrainian President Volodymyr Zelenskyy’s car was involved in an accident in Kiev, officials say, but he was not seriously injured.

“The president has been examined by a doctor, no serious injuries were found,” Zelensky’s spokesman Serhii Nykyforov said in a Facebook post.

Nykyforov added that medics traveling with the president provided first aid to the driver of the other vehicle.

He did not clarify when the traffic accident took place.

Earlier, on Wednesday, Zelenskyy visited the city of Izyum, days after it was liberated from Russian occupation. He took part in a ceremony to raise the flag of Ukraine.

Located in the northeastern province of Kharkov, Izyum is close to the disputed Donetsk region and was a strategically important center for Russian ambitions in the area.

Photos showed the president greeting soldiers who were part of Ukraine’s rapid counteroffensive that has driven Russian troops from several cities.

“We are only going in one direction – forward and to victory,” Zelenskyy said during his visit.

Here’s an overview of some of the other key developments related to the Russian invasion of Ukraine on September 14.

“Missiles were aimed at hydraulic structures. This caused the water level of (the) Inhulets River to rise and threaten the city,” Anton Gerashchenko, an adviser to the Minister of the Interior, wrote on Twitter.

“The terrorist state continues to wage war against civilians. This time – rocket attacks on hydraulic structures and an attempt to flood Kryvyi Rih,” Ukrainian President Volodymyr Zelenskyy wrote on Telegram.

He added that Russians “want to panic, create an emergency, try to leave people without light, heat, water and food”, but they will not “break” the Ukrainians.

Russian President Vladimir Putin appears to have “unfortunately” not yet realized that the decision to invade Ukraine is a mistake, German Chancellor Olaf Scholz said on Wednesday, commenting on a 90-minute telephone conversation with Putin on Tuesday.

“Unfortunately, I can’t tell you that the impression has grown that starting this war was a mistake. And there was no indication that new attitudes are emerging,” Scholz said.

The departure of Russian troops from Ukraine was the only way to “give peace a chance in the region,” Scholz added.

While Putin’s positions do not appear to have shifted, the German chancellor said it was necessary to maintain talks with the Russian leader.

“It’s good to talk to each other and say what there is to say on this subject,” Scholz said.

UN chief spoke to Putin about grain deal and fertilizer

United Nations Secretary-General Antonio Guterres said he spoke with Russia’s Vladimir Putin about the grain export agreement in the Black Sea, prisoners of war and the Russian-operated Zaporizhzhya nuclear power plant in Ukraine.

Guterres also said it was “absolutely essential” that obstacles to Russian fertilizer exports were overcome.

“Ukraine has not initiated these talks; this is a UN initiative,” Kuleba said at a news conference in Odessa, adding that Ukraine would not approve any deal that conflicts with its national security interests.

Hungary declined to block the extension of European Union sanctions against Russia. The formal procedure to extend the sanctions for another six months has been completed on time, a spokesman for the Czech EU Council presidency told dpa.

Sanctions are considered a temporary measure and must be renewed periodically. If Hungary had blocked the extension, the sanctions would have expired this week. The extension is official as soon as the decision is published in the Official Journal of the EU.

The sanctions were imposed because of Russia’s continued invasion of Ukraine. They include sanctions against more than 1,200 individuals for their support of Russian President Vladimir Putin and his policies.

According to the Polish government, about 1.3 million refugees from Ukraine currently live in Poland.

Szefernaker also said that about 600,000 Ukrainian refugees of working age have been given a temporary personal identification number, making it easier to deal with authorities and the state health system in Poland. More than 400,000 people from this group have already found legal work.

In the months following the Russian invasion of Ukraine on February 24, Poland had taken in a very large number of Ukrainian refugees. Polish Prime Minister Mateusz Morawiecki spoke in June of more than two million people who had found protection in his country.

The Kremlin downplayed the impact of the lost gas sales to Europe, saying there were other countries looking to buy Russian energy while Europe wants to reduce its dependence on Moscow.

Asked whether a long-term halt to gas exports to Europe would prove impossible in the long run, Kremlin spokesman Dmitry Peskov said other buyers could offset European demand.

“There are regions that are developing at a much faster pace … they can offset the (reduced) demand for (Russian) gas in Europe,” he said.

Since the beginning of the Russian invasion of Ukraine, the European Union has pledged to reduce its dependence on Russian energy.

The Ukrainian military has likely shot down a Russian-made drone used by Russia, the UK confirmed on Wednesday.

The Ukrainian side encountered the triangle or delta-shaped drone known as the Shahed-136 near Kupiansk, a city in Kharkov.

The Army’s Strategic Communications Directorate released images on Tuesday of the wreckage of the drone, which is believed to have a range of about 2,500 kilometers.

This information was corroborated by the latest British military intelligence report which stated that “Russia most likely deployed Iranian unmanned aerial vehicles (UAV) in Ukraine for the first time” in the six-month war.

The intelligence report warned that this was a sign that “Russia is almost certainly increasingly sourcing weapons from other heavily sanctioned states such as Iran and North Korea” while using its own dwindling stockpile.

In July, the US had warned that Iran would come to the aid of Moscow in Ukraine with hundreds of bomb-carrying drones.

Western sanctions have brought both Russia and Iran closer together. This comes even as Iran’s nuclear deal with world powers hangs by a thread.

President Volodymyr Zelenskyy said in a speech on Tuesday evening that about 8,000 square km (3,100 sq mi) has been liberated by Ukrainian forces so far this month and Ukraine is working to secure those regions. All the reclaimed area is in the Kharkiv region.

Zelenskyy said “stabilization measures” had been completed in half of the territory and were underway in other areas.

Since the Kremlin withdrew from its main bastion in the northeast on Saturday, Ukrainian forces have made significant progress.

Their unprecedented counter-offensive led to the recapture of dozens of cities.

The inhabitants of these areas welcomed their troops with open arms.

“I was walking away…when I saw an armored personnel carrier coming into the square with a Ukrainian flag: my heart just tightened and I started sobbing,” said Mariya Tymofiyeva, a 43-year-old resident of Balakliia, a crucial military supply hub.

Ukrainian troops fight the Russian army in the south and east as Kiev goes on the offensive.

Meanwhile, US President Joe Biden said it’s hard to say whether Ukraine’s counteroffensive gains are a turning point in pushing back the Russian invasion.

“Obviously the Ukrainians have made significant progress. But I think it’s going to be a long road,” he said.

The Ukrainian government on Tuesday stressed the security guarantees it needs to ensure the country’s sovereignty after the war with Russia.

The plan was drafted by the government in the presence of former NATO Secretary General Anders Fogh Rasmussen in Kiev.

It outlined the equipment and training the Ukrainian military needed from its western allies. The plan called for multiple European countries – as well as the US, Canada, Australia and Turkey – to ensure Ukraine’s security. At the same time, Ukraine said it would continue its efforts to join NATO.

Pope rejects the use of religion to justify war

Pope Francis said on Wednesday that religion should never be used to justify the “evil” of war, adding that God should never be “held hostage by the human thirst for power.”

He spoke at an interfaith conference in Kazakhstan, which was also attended by the Russian Orthodox hierarchy and other faith leaders.

Without mentioning Russia or Ukraine in his remarks, the Pope called on those present to unite in condemning the war.

Among those in attendance was Metropolitan Anthony, who is responsible for foreign relations for the Russian Orthodox Church, a firm mainstay of the Russian invasion of Ukraine. Church leaders have called the war a “metaphysical” struggle with the West.

The Pope called for peace, saying: “If the creator to whom we have consecrated our lives is the author of human life, how can we, who call ourselves believers, consent to the destruction of that life?”