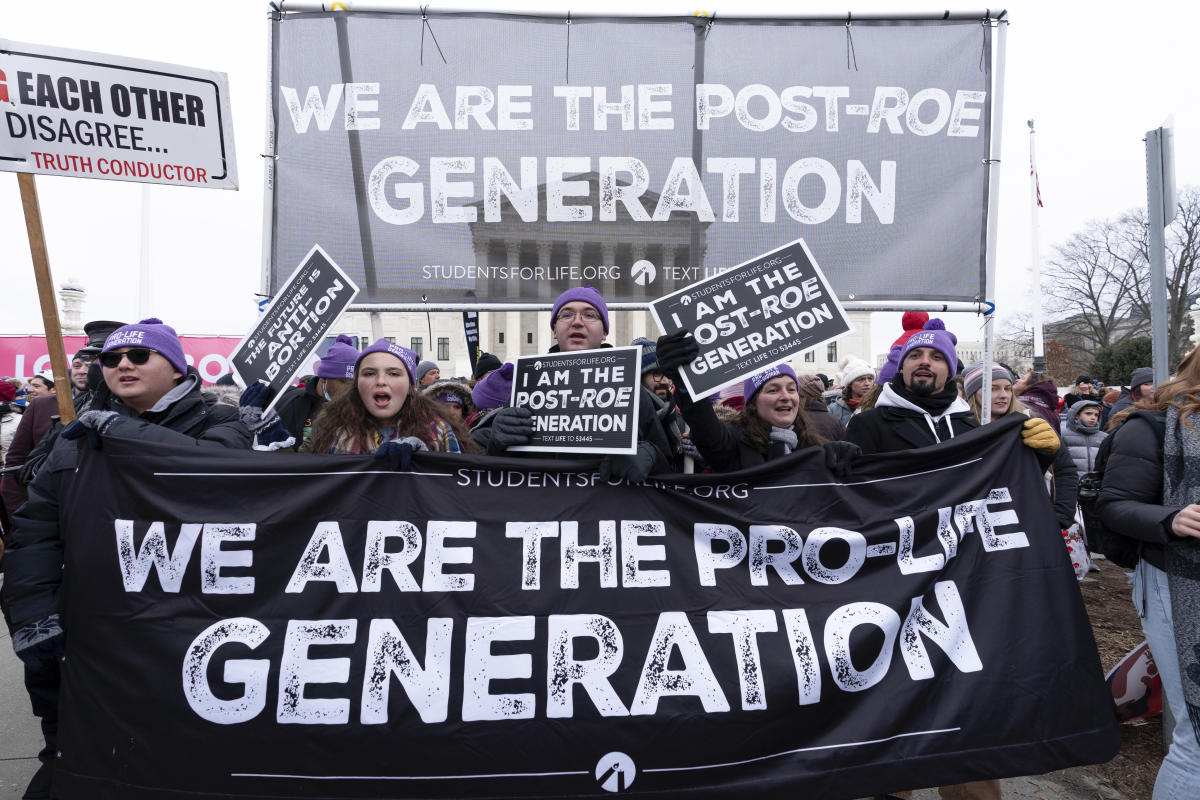 Anti-abortion activists will have multiple reasons to celebrate — and some reasons for unease — as they gather in Washington on Friday for the annual March for Life.

The march, which includes a rally that draws abortion opponents from across the country, has been held annually since January 1974 — a year after the US Supreme Court’s Roe v. Wade decision established a nationwide right to abortion.

This year’s meeting — 50 years after that decision — will be the first since the Supreme Court struck down Roe in a landmark ruling last June.

Since then, 12 Republican-governed states have enacted sweeping abortion bans, and several others are trying to do the same. But those movements have been compensated by other developments. Abortion opponents were defeated in ballot votes in Kansas, Michigan and Kentucky. State courts have blocked the enactment of several bans. And there are countless efforts to help women in states where abortion is banned get out-of-state abortions or use the abortion pill for self-managed abortions.

With numerous democratically governed states taking steps to protect and expand access to abortion, Tobias compared the current situation to the pre-Civil War era when the nation was closely divided between free states and slave states.

“I wouldn’t be surprised if we’ve had something like this for a few years,” she said. “But I do know that pro-lifers won’t give up — it’s a civil rights issue for us.”

The theme for this year’s March for Life is “Next Steps: Marching Forward into a Post-Roe America.” Scheduled speakers include Hall of Fame football coach Tony Dungy and Mississippi Attorney General Lynn Fitch, who won the Supreme Court case that overturned Roe.

March for Life president Jeanne Mancini described the June verdict as “a huge victory for the pro-life movement”.

“But the battle to build a culture of life is far from over,” she said. “March for Life will continue to advocate for the unborn and policies that protect them until abortion becomes unthinkable.”

The prospects for federal legislation restricting abortion across the country are negligible for now, given that such measures stemming from the Republican-led House would be rejected in the Democrat-led Senate. The main battlefields will be in the states.

Since June, near-total bans on abortion have been introduced in Alabama, Arkansas, Idaho, Kentucky, Louisiana, Mississippi, Missouri, Oklahoma, South Dakota, Tennessee, Texas and West Virginia. Legal proceedings are pending against a number of those prohibitions.

Elective abortions are also unavailable in Wisconsin, due to legal uncertainties facing abortion clinics, and in North Dakota, where the lone clinic has moved to Minnesota.

Bans issued by lawmakers in Ohio, Indiana and Wyoming have been blocked by state courts while legal proceedings are pending. And in South Carolina, the state Supreme Court on January 5 struck down a ban on abortion after six weeks, ruling that the restriction violates the state’s constitutional right to privacy.

The Guttmacher Institute, a research group that supports abortion rights, says the overall result is “a chaotic legal landscape that is disruptive to healthcare providers trying to provide care and patients trying to get it.”

“If people in their state don’t have access to abortion care, they are forced to make the difficult decision of whether to travel long distances for care, have an abortion themselves, or carry an unwanted pregnancy to term,” said Guttmacher associates Elizabeth. Nash and Isabel Guarnieri. wrote last week.

Looking ahead, some anti-abortion leaders hope that Republicans will nominate a 2024 presidential candidate who will aggressively push for nationwide abortion restrictions, rather than keeping it as a state-to-state matter.

“The approach to winning with abortion in federal races, which has been proven for a decade, is this: clearly state the ambitious consensus pro-life position and contrast that with the extreme views of Democratic opponents,” said Marjorie Dannenfelser, president of SBA Prolife America.

Dannenfelser says she is not surprised by the divisive ups and downs that have unfolded since the June ruling.

“This is what it looks like when democracy is restored and we have a voice in the debate,” she said. “For fifty years we had no voice because the judiciary would always protect public opinion from being influenced by the law.”

“We always knew it wasn’t going to be a straight line (after Roe’s withdrawal),” she said, adding “we know neither side is going to lay down and die.”

Professor Kathleen Sprows Cummings, director of the University of Notre Dame’s Cushwa Center for the Study of American Catholicism, suggested that the anti-abortion movement may suffer from a perception among many Americans that it is more concerned with controlling the female body than dealing with unintended pregnancies. .

“It’s more about consolidating their political power than babies,” she said.

Some opponents of abortion try to counter such perceptions. In Texas, for example, anti-abortion groups are urging lawmakers to spend more money on services for pregnant and parenting Texans, including expanding Medicaid coverage for mothers.

According to Texas Right to Life, the state’s new abortion ban has had a major impact — it says only 68 abortions were recorded by state health officials in July 2022, compared to 4,879 in July 2021.

The group noted that the data does not include illegal, unreported abortions — which are widely believed to be on the rise as women receive abortion pills in the mail from abroad or from suppliers in Mexico.

Charles Camosy, an anti-abortion professor of medical humanities at Creighton University School of Medicine, has analyzed the high-profile election defeats suffered by the anti-abortion movement. Voters in Kansas and Kentucky rejected constitutional amendments that would have declared no right to abortion; Michigan voters passed an amendment that enshrines the right to abortion in the state constitution.

“Pro-lifers have clearly and badly lost the PR battle since June and this has shaped the way people vote,” Camosy said via email. He said abortion rights advocates were better organized and better funded, while many anti-abortion politicians avoided the issue or sounded too extreme.

“However, obviously very good things have happened,” Camosy added, citing the drop in abortions in states with prohibition.

“Pro-lifers now also enjoy the chance to actually debate the issues in a democratic, open context…rather than constantly bumping into the fiats of different courts,” he said. “We may lose some battles at the beginning…but it’s worth having the debates.”

The The Bharat Express News’ coverage of religion is supported by the TBEN’s partnership with The Conversation US, with funding from Lilly Endowment Inc. The TBEN is solely responsible for this content.