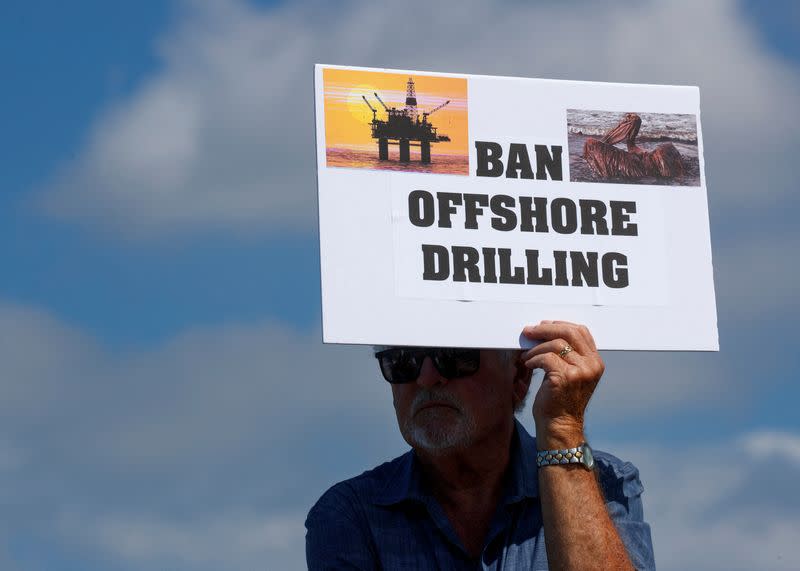 (Reuters) – US President Joe Biden vowed during his 2020 election campaign to end federal oil and gas drilling as a key step in his strategy to fight climate change.

The US Senate Democrats spending bill of $430 billion agreed this week could negate that promise. In fact, if it succeeds, it would guarantee the continuation of drilling rights auctions on federal lands and waters for at least another decade.

But with Congress entering a summer recess late next week, Senate Majority Leader Chuck Schumer faces an arduous road to speedily passing the bill, which would be a victory for Biden and fellow Democrats hoping retain control of Congress during midterm elections in November.

The legislation also includes nearly $370 billion for energy security and climate change efforts, including extensive and comprehensive incentives for electric vehicles, solar and wind energy. It was agreed after more than a year of arduous negotiations between Schumer and fellow Democrat Senator Joe Manchin.

Manchin, who represents the coal-producing state of West Virginia and has sought to protect fossil fuel interests, made sure the bill included protections for oil and gas.

For example, it makes allowing solar and wind facilities on federal land conditional on the Department of the Interior offering at least 2 million acres of land for rent to drillers in the previous year, a provision that would last a decade.

In federal waters, offshore wind leases would be conditional on the agency offering at least 60 million acres on the outer continental shelf to drillers the year before, according to the text of the bill.

The deal would also restore the results of a lease sale in the Gulf of Mexico in November 2021, which was quashed by a federal judge due to its environmental impact, and would require offshore auctions to be held in the Gulf and off the coast of Mexico. Alaska that were canceled earlier this year.

Green groups supported the bill’s billions of dollars in clean energy incentives, but criticized the protection of federal oil and gas leases.

“That’s where this bill is a bitter pill to swallow,” Erik Schlenker-Goodrich, executive director of the Western Environmental Law Center, said in an interview.

The White House did not respond to a request for comment. Biden called the spending deal this week a compromise that will not deliver on its full agenda, but will ease inflationary pressures.

An oil and gas group that sued the administration over the lease interruption called the provision “a pleasant surprise.”

“Since this administration only wants to promote wind and solar energy, the bill would force them not to neglect oil and natural gas,” Kathleen Sgamma, president of the Western Energy Alliance, said in an email.

While the bill protects the federal drilling program, it also includes reforms that would make development more expensive. It will increase royalty rates for onshore drilling from 12.5% ​​to 16.66% and increase minimum bids, rental rates and bonding requirements intended to protect taxpayers from paying the cost of clearing resources if companies fail.

It also eliminates non-competitive leasing, which allowed speculators to snatch parcels of land that were not sold at auction at very low cost, and imposes a fee for emissions of the greenhouse gas methane.

One analyst said the emissions reductions the bill would deliver will likely far outweigh the climate impacts of new federal oil and gas leases.

“The more than $300 billion in additional incentives and investments on the clean energy side are likely to have a much greater impact on emissions than those lease components,” John Larsen, a partner at Rhodium Group, said during a conversation with reporters on Thursday.

President Joe Biden pledged to end new federal leasing during his presidential campaign, and his Department of the Interior attempted to pause new auctions shortly after taking office. Months later, a federal judge ruled that they should resume the auctions.

Meanwhile, the government is under mounting pressure to deal with high energy prices due to the economic rebound from the pandemic and Russia’s invasion of Ukraine, which has prompted the White House to ask the oil industry to ramp up production.