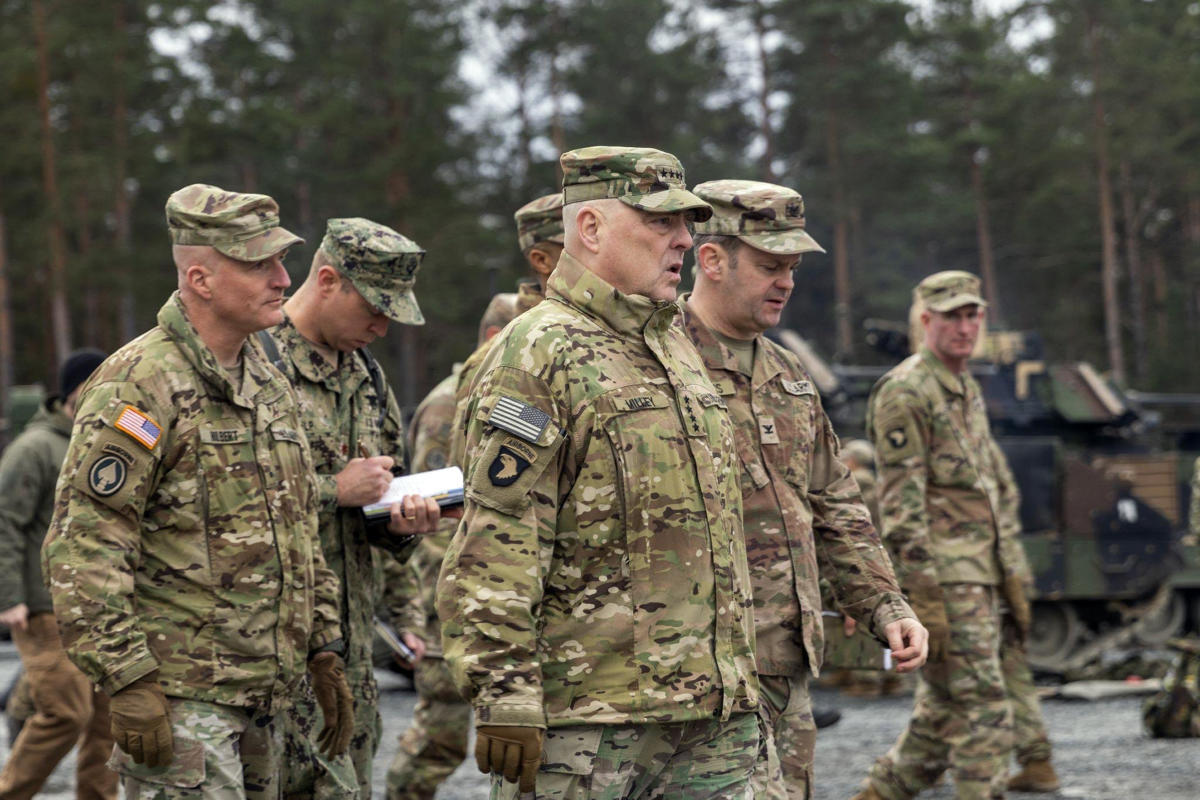 GRAFENWOEHR TRAINING AREA, Germany (TBEN) — Monday was only day two for Ukrainian soldiers in the US Army’s new training program, but the message came across loud and clear.

These are urgent times. And the lessons they will receive over the next five weeks on weapons, armored vehicles and more advanced combat techniques will be critical in preparing to defend their country against the Russian invasion.

“This is no ordinary rotation,” said U.S. Army General Mark Milley, Chairman of the Joint Chiefs of Staff, during a meeting with commanders Monday afternoon. “This is one of those moments in time when if you want to make a difference, this is it.”

Milley, who visited the vast Grafenwoehr training area to get his first look at the new so-called combined arms instruction, said it will better prepare Ukrainian troops for an offensive or countering a wave of Russian attacks.

He spent just under two hours in “Camp Kherson” – part of the base named after a town in Ukraine where Ukrainian troops won a major victory against Russia last year. More than 600 Ukrainian troops began the extensive training program at the camp a day before Milley arrived.

ALSO READ  Covid cases: Nearly 60,000 people died in China in the past 5 weeks

For the first time since the start of the war nearly a year ago, reporters were given wide access to view different parts of the training. The reporters were allowed to follow Milley and watch his interactions with Ukrainian and US troops and commanders, but were not allowed to report specific conversations with the Ukrainian armed forces or take any photos or videos. The restrictions reflect continued US concern over escalating Russian anger over the West’s involvement in the war or provoking wider conflict.

The US has been providing training at Grafenwoehr for years, including for Allied troops in Europe. But limited instruction for Ukrainian troops began last year, shortly after the Russian invasion. At the time, it specifically targeted various weapon systems supplied by the US, such as the howitzer.

Last month, the Pentagon announced it would be expanding training in an effort to sharpen the skills of Ukraine’s armed forces. The five-week course teaches them to effectively move and coordinate their company and battalion units in battle, using combined artillery, armor and ground forces.

It includes classroom instruction and fieldwork that will start with small squads and gradually grow into larger units. It will culminate in a more complex combat exercise involving an entire battalion and a HQ unit.

Training at Grafenwoehr is provided by the 7th Army Training Command.

Speaking to two reporters who traveled to Europe with him on Sunday, Milley said the complex training — combined with a range of new weapons, artillery, tanks and other vehicles headed for Ukraine — will be key to preparing the country’s armed forces. country to recapture territory that has been captured by Russia in the nearly 11-month-old war.

“The urgency was clear,” said Army Colonel Dave Butler, Milley’s spokesman. “These soldiers go out to defend their country in battle.”

ALSO READ  Who is Lucile Randon, the world's oldest person who died at the age of 118

Milley said on Sunday the goal is for incoming weapons and equipment to be delivered to Ukraine so that the newly trained armed forces can use it “sometime before the spring rains turn up. That would be ideal.”

The new statement comes as Western analysts point to signs the Kremlin is gearing up for a protracted war and say the Russian military leadership is preparing for a larger mobilization effort.

On the other side of the battlefield, Ukrainian troops are facing heavy fighting in the eastern province of Donetsk, where the Russian army claims control of the small salt mining town of Soledar. Ukraine claims its troops are still fighting, but if Moscow’s troops take control of Soledar, they could move closer to the larger city of Bakhmut, which has been fighting for months.

Russia also launched a widespread barrage of rocket attacks this weekend, including in Kiev, the northeastern city of Kharkov and the southeastern city of Dnipro, where the death toll in an apartment building rose to 40.

The Bharat Express News - February 7, 2023 0
One Day At A Time actress Valerie Bertinelli shared on TikTok this weekend that she's lost 10 pounds so far this year.The 62-year-old beauty...