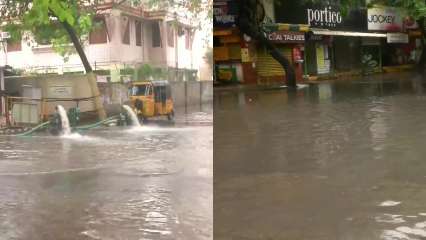 India’s meteorological department issued a red alert in five districts of Tamil Nadu after heavy rains hit the southern part of the state on Thursday, causing flooding and congestion.

Ramanathapuram, Thoothukudi, Tirunelveli, Puduokotai and Nagapattinam districts are facing heavy rains as roads and rails are submerged by water.

Several residential areas and hamlets are under water and schools and colleges will remain closed.

On Thursday, Thoothukudi recorded 25 cm of rain until evening and heavy rains continued to hit the district on Friday morning.

Flights were redirected to nearby Tiruchi Airport due to poor visibility and bad weather conditions in Thoothukudi. Rail services were affected as the tracks were submerged in water.

Heavy to very heavy rains will continue through Monday, according to IMD, although cyclonic circulation over the southwestern Bay of Bengal is unlikely to concentrate in an area of ​​low pressure.

ALSO READ  Schools in Pondicherry will remain closed for grades 9 to 12 today, tomorrow

Flash floods have been reported near the Courtallam waterfalls. The districts of Tirunelveli and Tenkasi also received massive rains. Almost all of the residential areas in these neighborhoods are flooded, and in several parts of the neighborhoods near the riverbanks, houses are damaged as water gushes out in low areas.

Meanwhile, the meteorologist issued a yellow alert for Chennai on Friday and Saturday and predicts heavy rain until Monday in the state capital. The department also warned people living in low lying areas to be careful.

ALSO READ  India has not taken the right path of progress in the past 75 years: RSS Chief

Collectors from Villupuram, Myladuthurai, Tiruvannamalai, Kancheepuram and Kallakuruchi districts have also ordered vacations for the schools. IMD predicted heavy rains in Kancheepuram and Tiruvallur districts on Saturday and Sunday.