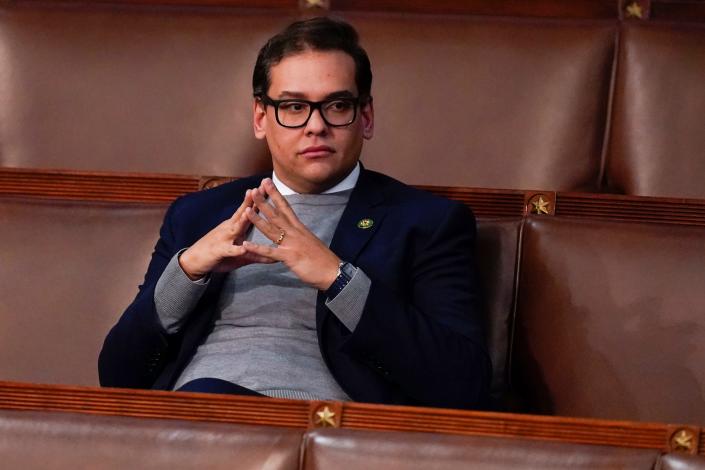 A recently surfaced video clip from 2019 shows Rep. George Santos introduces himself as Anthony Devolder, which raises questions about why the congressman used to go by different names.

In the video posted by Twitter account Patriot Takes, Santos addresses a panel at an event in New York City featuring conservative commentators who are part of the LGBTQ community.

“My name is Anthony Devolder. I’m a native of New York City. I recently started a group called United for Trump, so if you want to follow along, that would be great,” says Santos.

In the video, Santos addresses Brandon Straka, a self-described former liberal who launched the Walk Away campaign to encourage Democrats to leave the party, calling him an “idol to all of us.”

He then asks a question to Straka and fellow panelist transgender YouTuber Blaire White about educating transgender people away from “the narrative that the media and the Democrats put forward.”

The New York congressman has admitted to lying about his college and work history and has previously listed his full name as George Anthony Devolder Santos.

However, his full legal name cannot be confirmed as his birth certificate has not been made public and it is not clear why he used multiple variants of that name.

Other clips and social media posts that have surfaced reveal that Santos went by the names Anthony Devolder and George Devolder until 2020.

He first ran for Congress in New York in 2020 under the name George Santos before losing to Democratic party incumbent Thomas Suozzi.

In a video taken during his 2020 campaign, also shared by Patriot Takes, a speaker introducing him expresses confusion over why he changed his name from Anthony Devolder to George Santos.

CNN too uncovered messages on social media from 2020 in which Santos bears the name George Devolder.

Democratic Representative Maxwell Frost also tweeted about the controversy, wondering “what the fake name is.”

Santos has been accused of fabricating key elements of his resume and numerous facts about his life and family history.

In an interview with Rep. Matt Gaetz on Thursday, the congressman claimed he has lived “an honest life” and has “never been accused of wrongdoing.”

Santos has also faced calls to resign from other Republicans.

The Bharat Express News - February 2, 2023 0
A Texas man has died after being beaten by several dogs while protecting his pet.Houston Police Department was alerted about 4:15 p.m. on Wednesday,...