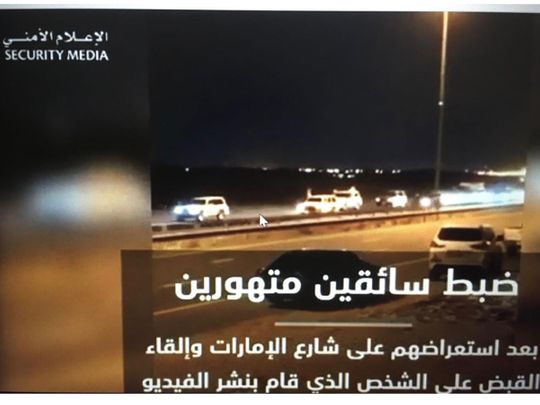 Umm Al Quwain: Police arrested a group of young men who were recklessly driving their vehicles without license plates on Emirates Road in Umm Al Quwain.

The person who photographed the incident and posted it on social media has also been arrested. The vehicles were seized. The motorists have been transferred to judicial authorities for further action. Authorities said they were seeking harsh punishment so that it could have a chilling effect on others.

The Home Office stressed that the police monitor these irresponsible acts and will not be lenient in applying the law to anyone who does not obey the laws and poses a threat to their life and the lives of others. Police called on the public not to post such videos, but to help law enforcement by promoting social responsibility. Members of the public have been invited to reach the police through the “police station in your phone” service on the ministry app (moiuae).

Major General Shaikh Rashid bin Ahmad Al Mualla, Commander-in-Chief of Umm Al Quwain Police, said that these reckless people, by their actions, represent an imminent threat and danger to the safety of the road and its roads. users.

The Interior Ministry pointed out that reckless driving of vehicles on national roads is incompatible with the concept of positive citizenship due to the serious accidents that claim the lives of perpetrators and the innocent of road users and property of the State, and that to put an end to it, it needed the concerted efforts of all. sectors of society, especially families, to sensitize young people to the dangers of these practices. He warned young people against holding such dangerous rallies and parades, adding that there will be no complacency in law enforcement.

On Wednesday evening, UAQ police, in cooperation with the municipality, launched a public awareness campaign to prevent rallies and stops on the sides of Emirates Road and Shaikh Mohammed bin Zayed Street in the emirate. in order to ensure road safety and preserve the general appearance of the city.

Kremlin critic Alexei Navalny arrested on his way back to Russia