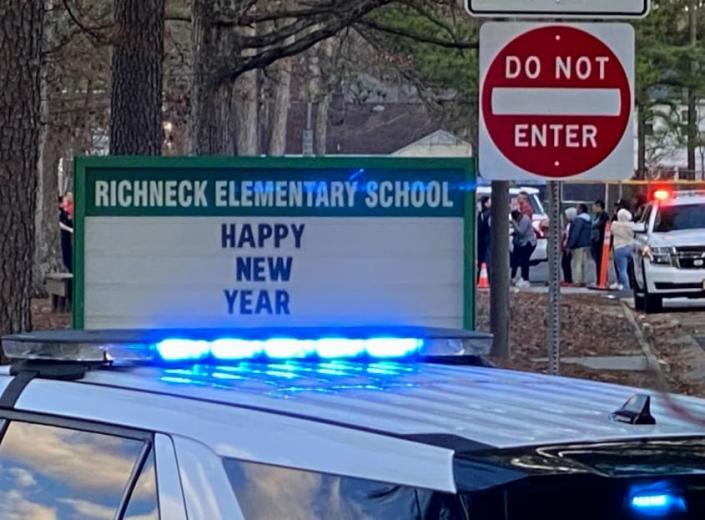 A Virginia schoolteacher was shot and seriously injured in a first-grade classroom Friday by a six-year-old student, law enforcement officials said.

The shocking incident took place at Richneck Elementary School in the City of Newport News. Authorities said the unidentified 30-year-old teacher was taken to hospital with “life-threatening” injuries, according to a Newport News police statement, though her condition had improved somewhat by Friday afternoon.

While details of the shooting have not been released, Newport News police chief Steve Drew told reporters at a news conference, “The individual is a six-year-old college student. He is currently in police custody.”

Drew added, “We’ve been in contact with our commonwealth attorney and some other entities to help us best serve this young man.”

It is believed the shooting was not accidental, and Drew said the suspect shot the teacher once with a gun. Officials are investigating how the gun ended up in the hands of a six-year-old, and Drew has advocated preventing violence among children.

This sentiment was echoed by Newport News Public Schools Superintendent Dr. George Parker, who added during the press conference, “Today our students were given a lesson in gun violence, and what guns can disrupt not only an educational environment, but a family. A community.”

Joselin Glover, whose son is in Richneck’s fourth grade, shared it The Virginian pilot“My heart stopped. I went crazy, very nervous. I just wondered if that one person was my son.”

ALSO READ  The next system can bring thunderstorms, heavy rain and wind gusts of 100 km/h

What happens if the House of Representatives cannot choose a speaker?

The breakup of the United Methodist Church