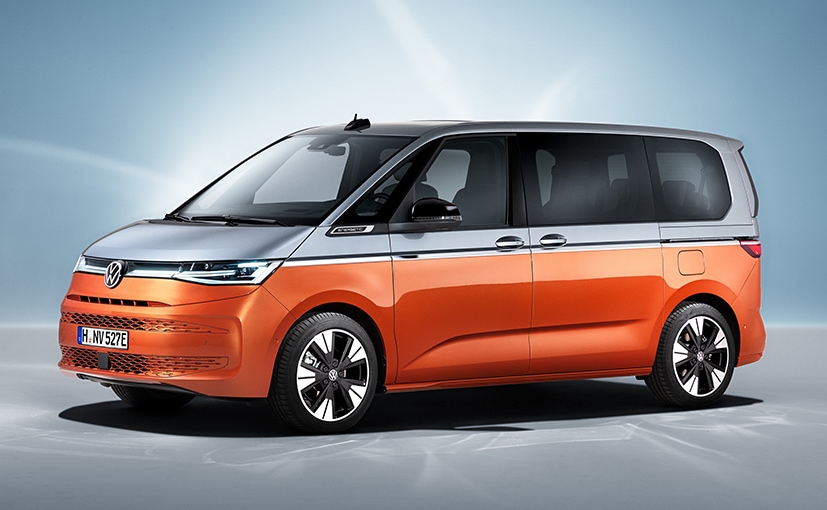 Volkswagen Commercial Vehicles has unveiled the all-new Multivan, which replaces the Caravelle and will be aimed at European markets. The Multivan is no longer built on the Transporter platform (on which the Caravelle was based) but is now based on the Volkswagen Group’s MQB platform, which only shows you the flexibility of this platform, that creates everything, from a Polo to now the Multivan.

The Multivan has an all-new exterior design that pays homage to the TBEN of its predecessors, dating back to the 1985 Transporter T3, with a horizontal design line and full-width grille and headlights, to give it a modern, dynamic look. The A-pillars have been redesigned to improve visibility, while unique front and rear light signatures give it a new look. The front air intakes, painted in the same color as the vehicle, have been reduced, paying homage to the heritage of the air-cooled rear engines of the first three generations.

The Multivan comes with a wheelbase of 3,124 mm

The Multivan is 1,941mm wide, 4,973mm long, up to 1903mm high and with a wheelbase of 3,124mm. A longer version, measuring 5,173 mm is also available. Overall, this means the new generation has a longer wheelbase and a wider, lower profile, all designed to improve aerodynamics, reduce fuel consumption and increase range. The model is available with wheels up to 19 inches, and in three specifications: “Multivan”, “Life” and “Style”.

As an option, a panoramic glass roof, with LowE laminated safety glass to reduce incoming heat radiation by 44%, as well as a power-operated rear hatch and power sliding doors, which can be operated by gesture control to facilitate the entrance. 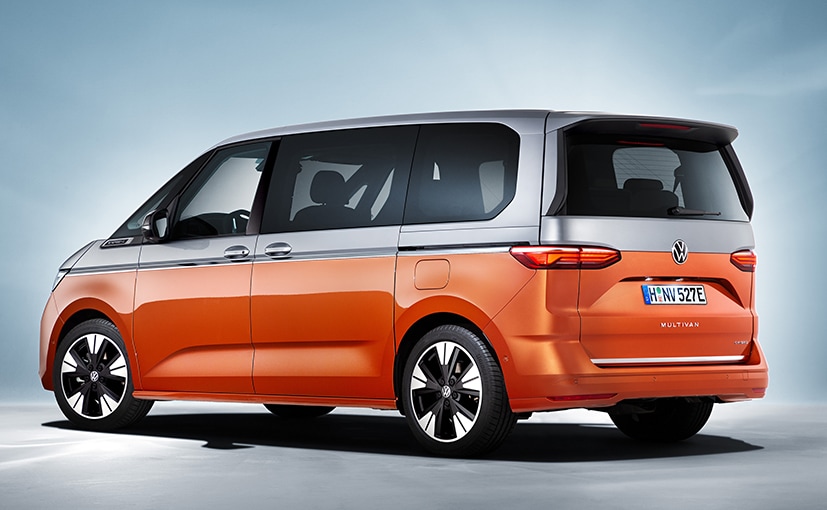 The Multivan comes standard with LED headlights but can be upgraded to IQ.LIGHT interactive headlights – matrix LEDs, which provide a full permanent beam, without blinding oncoming drivers and dynamic turns to provide illumination precise in the turns. The IQ.LIGHT system also includes an illuminated LED sidebar in the radiator grille as an additional element of the daytime running lights.

Inside, the new Multivan is more flexible and spacious than ever, with a new modular and lightweight seating system and an innovative table. With space for up to seven seats, the five rear seats, which are up to 25% lighter, can be moved and removed to accommodate, while the second row can be moved 180 degrees to create a conference style seating configuration. The full-width third-row bench seat has been replaced with individual seats to allow the removal of individual seats for full flexibility. 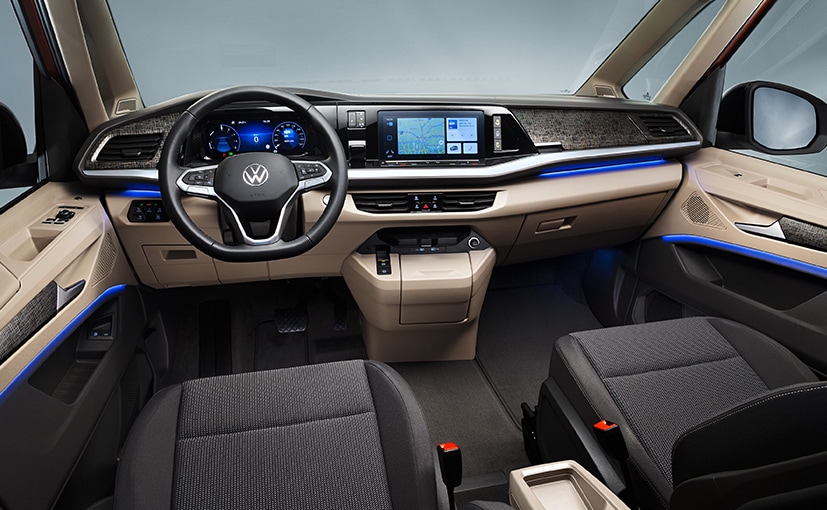 On the center console are the 10.25-inch “Digital Cockpit” screen and the 10.0-inch infotainment touchscreen.

An innovative multifunction table has been designed for the new Multivan. Thanks to the center rail, it can be moved between any row of seats and, for the first time, can be used as a center console between the front seats. The table, which is completely removable, is adjustable in height, three cup holders and a storage bin.

The completely flat floor from the front seats to the rear seats without a center console, made possible by the removal of the traditional handbrake, allows the flexible system of seats and table rails. Instead, the parking brake is activated electronically by button, or automatically. The new Multivan is offered only with a DSG automatic gearbox controlled via shift technology, which means that the gear lever has been removed to further increase occupant space, with ergonomically integrated controls. in the dashboard.

The cockpit area has been completely redesigned with a new multifunction steering wheel. All the key features of the new Multivan are now in one line of sight, with a secondary line for other functions to make operation as intuitive as possible. Touch controls provide direct access to settings such as air conditioning, seat heating and audio volume.

On the center console are the 10.25-inch “Digital Cockpit” screen and the 10.0-inch infotainment touchscreen. Centered in between on a glossy black surface are the new minimalist DSG wired gearshift controls. Two USB-C sockets are integrated as standard next to these and an optional tray for inductive charging of smartphones. For the first time on a Volkswagen Commercial Vehicles model, a head-up display is available.

The standard infotainment system is called “Ready 2 Discover” which includes an integrated eSIM to provide online convenience and security features. We Connect can be used free of charge for an unlimited time, with services such as breakdown assistance, vehicle status and park position. 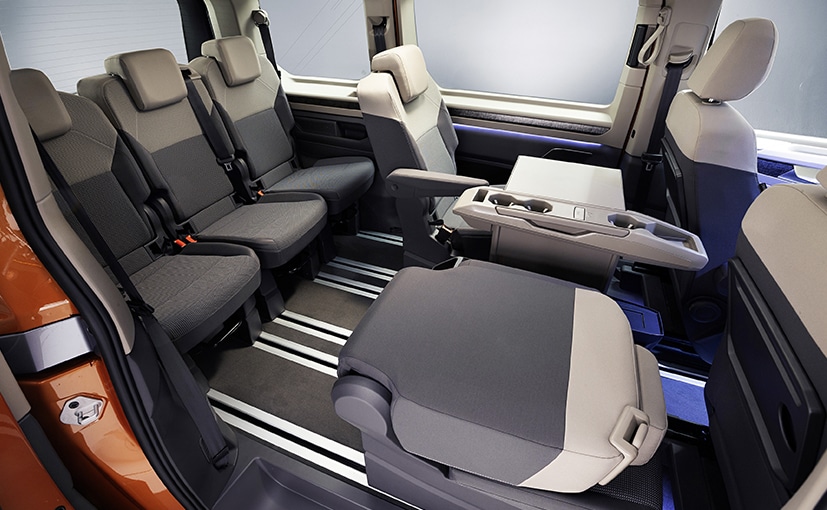 With space for up to seven seats, the five rear seats, which are up to 25% lighter, can be moved and removed

We Connect Plus, available free for three years, offers additional services such as the ability to lock and unlock the vehicle, or to remotely control the optional auxiliary heater via a smartphone. In combination with the more advanced and optional Discover Media and Discover Pro navigation systems, We Connect Plus includes other navigation-related services, such as online map update and traffic information. We Connect Plus also provides additional services for the eHybrid, such as the ability for owners to preset the interior temperature of the vehicle and manage the charging process via a smartphone.

All infotainment systems can be combined with a Harmon Kardon audio system developed specifically for the Multivan. In addition to 14 high-end speakers behind precision laser-cut panels, a 16-channel Ethernet amplifier with 840 watts of music output and four sound settings, the system uses the “Fraunhofer Sonamic Panorama” algorithm, which is able to separate the individual sources of a stereo recording and distribute them evenly over a U-shaped acoustic stage, to create the optimum sound.

Other new systems include Car2X – enabling local communication with other vehicles and road infrastructure to provide warnings of any danger, side protection, crosswind aid, stopping aid, which warns of oncoming traffic when turning onto a roadway; and an exit warning system, which warns when opening a door of any bicycle or vehicle approaching from behind.

Area View is also available on the new Multivan, a real 360-degree representation of the vehicle using four cameras, visible on the 10-inch infotainment screen, to make parking and maneuvering as safe and easy as possible.

Based on the Volkswagen Group’s MQB platform, the new Multivan, which has a towing capacity of up to 2,000 kg, is available with three powertrains, including for the first time in a Volkswagen commercial vehicle model, a plug-in hybrid option (PHEV). .

The new Multivan eHybrid combines a 147 hp 1.4 TSI engine with an 85 kW electric motor to produce a combined output of 215 hp, providing quiet, emission-free driving in electric mode only for short city trips while providing customers with the possibility of enjoying longer trips. The eHybrid uses a bespoke six-speed DSG gearbox.

The 13 kWh lithium-ion battery is housed under the Multivan’s flat floor, saving interior space and lowering the vehicle’s center of gravity for improved handling. The charging station is located on the right side of the front fender.

The front-wheel drive Multivan is also available with two turbocharged four-cylinder petrol engines: a 1.5 TSI and a 2.0 TSI. A four-cylinder turbo diesel will be introduced next year. Rest assured that the Multivan will not come to India.

MV Agusta to attempt a world record in 24 hours