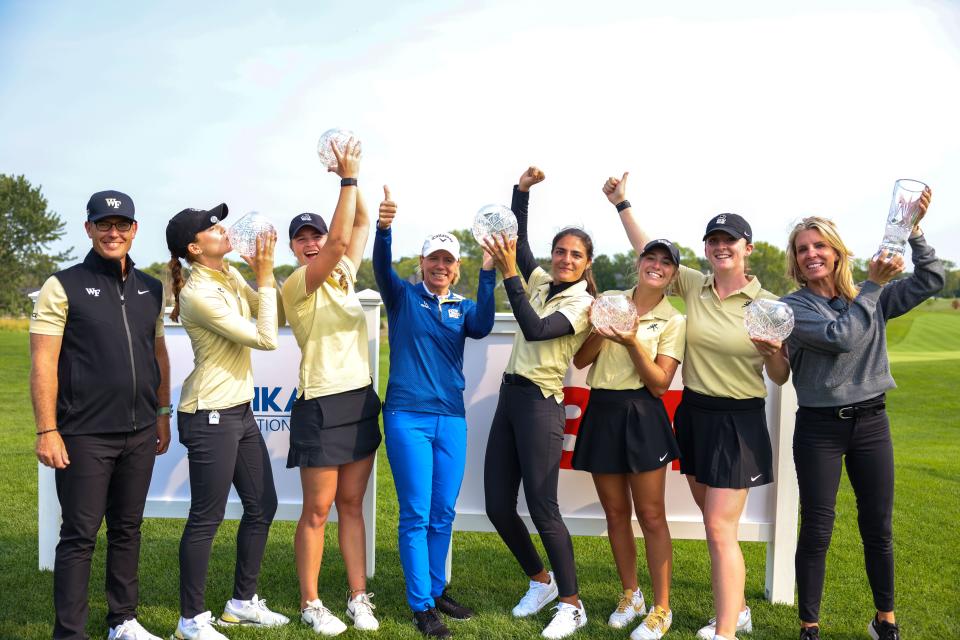 LAKE ELMO, Minn. – During the 2022 ANNIKA Intercollegiate, there was a constant theme throughout the week at Royal Golf Club outside Minneapolis.

Survive the front nine, attack the back nine. And that’s what the Wake Forest women’s golf team did.

the no. 3 Demon Deacons trailed by six shots on the final round, but they dominated both sides of the course and finished strong with a late birdie barrage to capture the ANNIKA Intercollegiate on a windy afternoon outside Minneapolis. Wake Forest had contributions from every member of its lineup, finishing at 6-under 858 for a week, but Wednesday’s 3-under 285 was enough to propel the Demon Deacons to their second ANNIKA Intercollegiate title, the first in 2019.

“You always feel comfortable when you have an edge, but we have some really good teams here, so we just had to stick to the game plan,” said Wake Forest coach Kim Lewellen. “We have a lot of veterans and they are used to this position.”

Rachel Kuehn helped in the win for Wake Forest. She birdied her last three holes to finish 1 under for the day and even par 216 for the tournament, which was a tie for 10th. Lauren Walsh also birdied the closing par-5, finishing in a tie for second place at 7-under 209.

Emilia Migliaccio shot a 2-over 74 on Wednesday, but also finished in a tie for 10th place. Carolina Lopez-Chacarra was 4 under in the top nine and finished 2 under to finish 19th in the tournament.

“Now we will keep learning and getting better,” Lewellen said. “It’s a cliché and you hear it a lot, but these players are good and always strive to get better. So I think if we just try to get better every day, enjoy this win, but get back to work tomorrow.

For a brief time, Texas tied Wake Forest for the team lead at 2 under, as Bohyun Park went up and down from a greenside bunker for birdie at 18. Park tied with Walsh for second and Texas finished second as a team at 2 -under 862.

Virginia, leading after the first two rounds, shot 8 over on the final round and finished third, one shot behind the Longhorns. South Carolina and Duke tied for fourth place 1-over 855.

However, the Cavaliers will not go home empty-handed. Sophomore Amanda Sambach went wire-to-wire and won her first collegiate tournament, finishing 9-under 207. She was overcome with emotion as she walked from the 18th green to the trophy presentation, but the win was a pinnacle of perseverance and self-belief.

“It means everything,” Sambach said. “My game has come this far. I hadn’t seen much improvement in the last few tournaments or years and now I see all my work is finally paying off.”

Sambach shot 2 over on the final lap, which she admitted was a drag. She had a one-shot lead when she was on the last tee box, but chipped within two feet of the hole on the par-5 and had an easy birdie putt, her 15th of the week, leveling with Walsh for the most of all players.

Duke’s Phoebe Brinker had five final round birdies and shot 3-under 69, which tied for the low round of the day. Brinker finished fourth and 6th under for the tournament solo. Florida’s Annabell Fuller also shot 3 under on the final round, finishing fifth with South Carolina’s Mathilde Claisse and Hannah Darling, who each shot 2-over 74 on Wednesday.

As Sambach cleared the final putt, her teammates rushed across the green and wet her with water. Then Annika Sorenstam, the tournament’s namesake, was there to congratulate her.

“It’s insane. First, just to win a tournament with her name on it, but to have her here in person is incredible,” said Samback. “She’s literally the GOAT.”