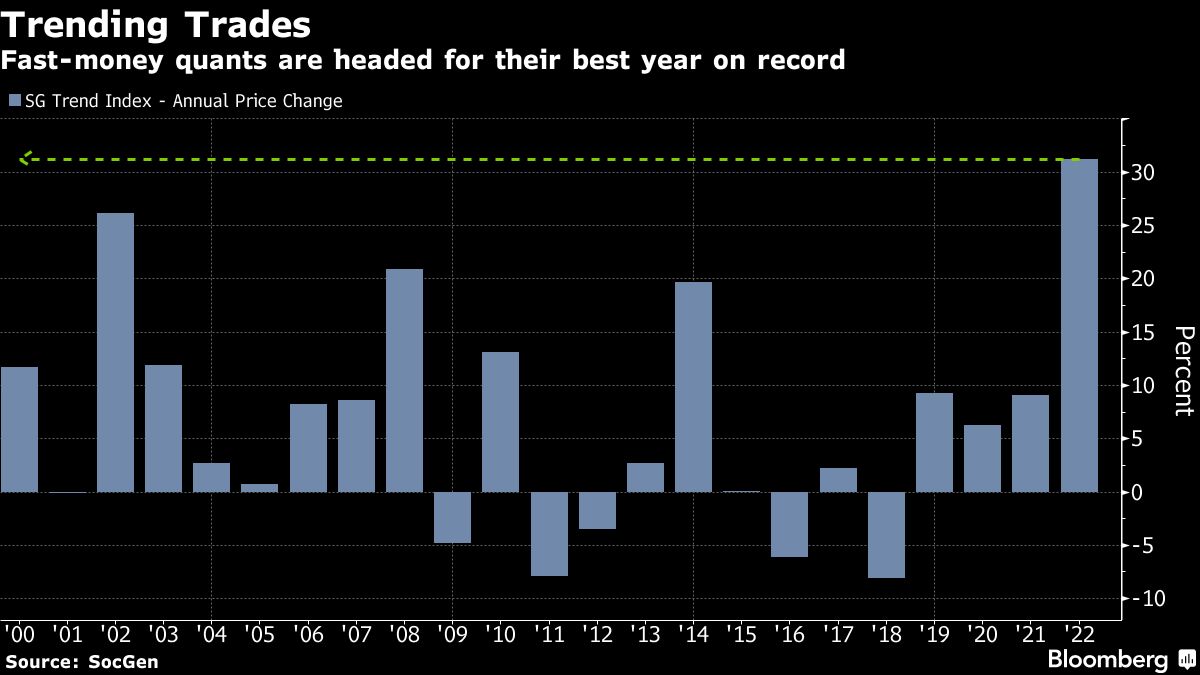 (Bloomberg) — Euphoria is sweeping every corner of Wall Street in the wake of the latest data indicating inflation is peaking from a four-decade high. Still, big money managers are in no mood to celebrate – betting that the world will see high prices in the coming years, in a game-changer for all types of investment strategies.

JPMorgan Asset Management maintains a record cash allocation in at least one of its strategies, while a hedge fund solutions team at UBS Group AG remains defensive. Man Group figures expect major inflation trading to continue, with all signs pointing to price pressures continuing to be strong for a long time to come.

Their cautionary stance comes amid lower-than-expected October price data that sparked a major cross-asset rally with companies like Citigroup Inc. who bet that the US central bank will moderate its aggressive threats.

“The road to a soft landing where the Federal Reserve is able to bring inflation all the way back to target without causing material economic damage is still narrow,” said Kelsey Berro, fixed income portfolio manager at JPMorgan Asset Management. “While the direction of travel should be lower for inflation, the pace of the slowdown and eventual flattening point remain highly uncertain.”

JPMorgan Asset remains invested in highly rated short-term debt, given ongoing price pressures. The company’s chief investment officer has long warned of a sticky inflation rate that others had predicted would decline after the pandemic.

At Man AHL, the company’s quantitative investment program, money managers expect trend-following strategies, which have been a big winner after relentless inflation-driven price trends, to continue to outperform. According to the world’s largest publicly traded hedge fund firm, a variety of carry trades that benefit from price differentials remain attractive as inflation continues.

“It was certainly the case that people were over-optimistic about the outlook for the markets earlier this year, and it’s still very possible that they’re over-optimistic now,” said Russell Korgaonkar, chief investment officer of Man AHL.

ALSO READ  Here's what we should be thankful for this Thanksgiving

A measure of the market’s inflation expectations is more consistent with the belief that future price growth will be closer to the Fed’s target of 2%. Traders see borrowing costs spike next year, as they price in a half-point rate hike by the Fed in December.

But any money manager hoping to ease price pressures quickly may be ahead of schedule, according to Bank of America Corp.

“Inflation stick of rapidly rising services and wage inflation is here to stay,” Bank of America strategists led by Michael Hartnett wrote. Inflation will fall but remain above the ranges of the past 20 years.

Investors also ventured outside the safety of cash — which they had used as an alternative to stocks — in what could amount to a wager that inflation will fall. In recent weeks, cash-like exchange-traded funds have seen record outflows, with nearly $5 billion from the $20 billion iShares Short Treasury Bond ETF (ticker SHV) in the fund’s largest two-week outflow ever, according to data collected by Bloomberg.

ALSO READ  Market rally continues to rise, but here's why S&P 500 could pause

But money managers, such as UBS’ hedge fund solutions, are not yet ready to move away from their defensive positioning.

“We have prepared our portfolios for this new regime of higher inflation and lower growth and we expect risk assets to remain volatile,” said Edoardo Rulli, deputy chief investment officer of UBS’s hedge fund solutions division. “We remain defensively positioned with stock and credit betas at historically low levels.”

Ed Clissold, the chief US strategist at Ned Davis Research Inc., also says it may be too early to get back into stocks or bonds. The company is still underweight equities and overweight cash.

“Cash returns could remain attractive,” Clissold said. “Aggressive easing by the Fed probably wouldn’t come until something breaks. That would mean lower risky asset prices, such as stocks.”

Major rotation is brewing in Asia as investors move north

“We’re heading for a family feud”: My father offered his three children the same amount of money. My siblings took cash with them....