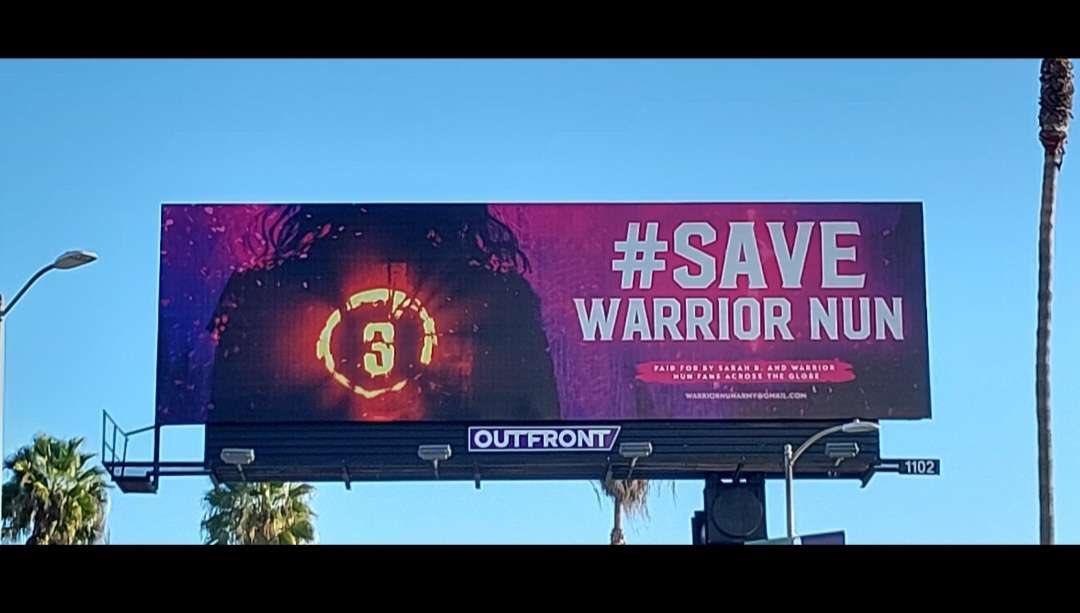 I’ve dealt with many fandoms in my time, but few have impressed me as much as those who tried to save Warrior Nun after season 2’s cancellation with Netflix, looking for season 3 and beyond to continue the story . While they were very organized to popularize certain hashtags or phrases every day on Twitter, now they’ve done something pretty hilarious.

Fans have united to buy a billboard across from Netflix’s Los Angeles headquarters, tasked with making #SaveWarriorNun and making a Season 3. The buyers say it will last 4 weeks and posted photos to show how half the Netflix office will stare at it every day on the corner of Sunset Blvd and Van Ness. I imagine that wasn’t cheap.

This was a purely fan-driven effort, with no one involved in the making of the show, although showrunner Simon Barry retweeted the billboard announcement saying he was “stunned and beyond impressed” and said the fans ” next level” were.

It’s definitely next level, and I’ll say Warrior Nun fans exhibit a tenacity you don’t often see in this space, even when so many other shows are being canceled left and right.

However, I worry that the only thing Netflix understands is viewership. Manifest fans banded together and kept Manifest at the top of Netflix’s most-watched movie list for ages, and so a final season of it was picked up by Netflix and “saved” from cancellation. But I haven’t seen Warrior Nun show up in the most viewed list. If it could, this far after Season 2 airs, that would be something Netflix would notice. Although yes, sure, they will also notice this literal billboard in their face.

We’ve seen shows in the past that have been saved for all sorts of reasons, so I’m never saying never for Warrior Nun. Netflix isn’t the only option here, because even if it doesn’t reverse its cancellation decision, another streaming service could theoretically strike a deal for season 3, instantly converting that fanbase into supporters and subscribers. But we don’t know the exact terms of the Netflix/Warrior Nun deal and what may or may not happen. Virtually no canceled Netflix original series has ever been brought back to life. Tuca and Bertie? That’s the only one that comes to mind. Simon Barry previously said he was exploring other options for Warrior Nun, but even after all this fan support, we still don’t have any concrete developments on that front.

Anyway, this was pretty impressive. My advice again would be to put on some sort of binge watch mass viewership campaign to see if they can get the show back into the top 10. Hashtags and billboards are good, and so are Warrior Nun’s insane critics and audience ratings, but viewership and budget are probably what it really comes down to.