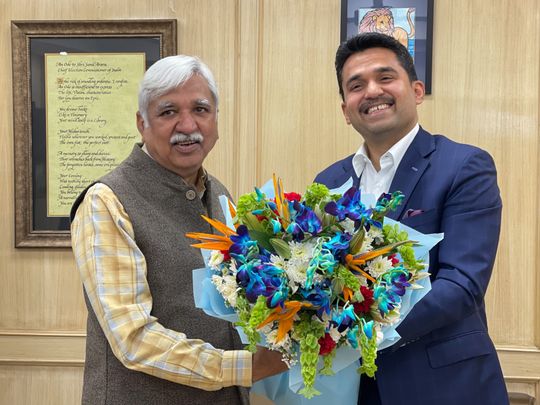 Dubai / New Delhi: The Election Commission of India (ECI) is working closely with the Ministry of Law and Justice and the Ministry of External Affairs in India to find a quick solution to the long-standing NRI [Non-resident Indians] Question of voting rights, it was revealed Monday.

“Dr Shamsheer Vayalil, President and CEO of VPS Healthcare, has met with CEC to call for an early resolution to extend the installation of the Electronic Mail Voting System (ETPBS) to the Indian Diaspora living overseas. He was informed that the matter was under active and empathetic scrutiny by the ICE, ”the statement read.

Dr Vayalil had met with ECI amid reports that the Indian government was planning to implement postal voting rights for NRIs in non-Gulf countries in the first phase, according to a press release. If the federal government and the ECI come out in favor of the demand it has raised, the NRIs of the Gulf countries will also be able to exercise their right to vote in the upcoming elections in Kerala, West Bengal, Tamil Nadu, Assam and Pondicherry.

Earlier reports indicated that the Ministry of External Affairs (MEA) had expressed reservations about the introduction of the postal voting system in the Gulf countries. It was reported that the government plans to implement the new program on a pilot basis in the United States, Canada, New Zealand, Japan, Australia, Germany, France and South Africa.

According to data available with the MEA, 8,888,373 Indian citizens reside in the six countries of the Gulf Cooperation Council (GCC). If the government approves postal voting rights for all NRIs, these people will be able to exercise their democratic rights without having to travel to their respective constituencies.

After meeting the CEC in their office, Dr Vayalil said the meeting was very positive. “The ICE has recognized and appreciated the legal battle in which I have been engaged for several years. The ECI assured that the issue of NRI’s voting rights was under consideration by the ECI and the central government. “

“The EC and officials from the Department of Justice and the Department of External Affairs are working together to bring a swift solution to the problem. I hope that the advantage of postal voting for NRIs will be extended as soon as possible, preferably this same year, ”he added. He also met with the Indian Minister of Law, Ravi Shankar Prasad, and requested the support of the federal government to find a quick solution to the matter.

Under current law, an NRI is required to travel to their respective constituency to exercise their right to vote. However, this is expensive and inconvenient for the majority of Indians living abroad. If the federal government amends the 1951 Representation of the People Act, it will allow millions of NRIs to participate in the democratic process. Although Lok Sabha (Lower House of Parliament) passed a bill allowing proxy voting in 2018, the bill lapsed due to the dissolution of Parliament ahead of the 2019 general election.

Alba Cars – Put you in control of affordable premium vehicles

UAE calls for consolidation of joint Arab action in region

The Bharat Express News - March 4, 2021 0
Alec Baldwin deleted his Twitter account again, amid the backlash after a recent tweet he posted about Gillian Anderson's accent in what appeared to...