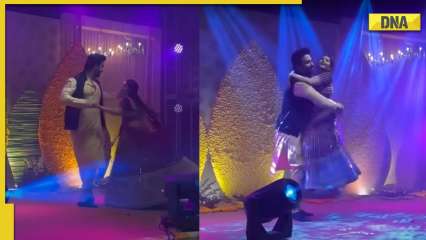 Estranged couple Charu Asopa and Rajeev Sen have come together for Sen’s cousin’s wedding. The former couple even posed with relatives including Rajeev’s sister Sushmita Sen and shared the stage to pump up the energy of the occasion.

Initially, Charu did a solo performance and received praise from the guests. After her performance, Rajeev joined Charu on stage and they grooved to a romantic dance number Pehla Pehla Pyaar Hai from Salman Khan’s movie Maine Pyar Kiya. They played two songs, and then Rajeev lifted Charun and stepped off the stage.
ALSO READ  Idris Elba Shares New Teaser And Release Date For Netflix 'Luther' Movie

Charu shared this party on her vlog and uploaded it on her YouTube channel. At the same wedding, Sushmita Sen later also danced on stage. Even the ex-boyfriend of the Aarya actress, Rohman Shawl, and her daughters were among the attendees of the wedding that took place in Kolkata.

After living separately, Rajeev and Charu try their broken marriage again. But they failed to save their marriage and ended their marriage. However, they are co-parenting Ziana. Even Charu said in her latest vlog that things are cordial between her and Rajeev.

It was a matter of reunions for the Sen family during their recent family wedding as Sushmita Sen attended the function with her ex-boyfriend Rohman Shawl whom he had split with in December 2021. Sushmita’s brother Rajeev Sen also posed with his estranged wife. Charu Asopa and their daughter Ziana at his cousin Gaurav Sen’s wedding ceremony in Kolkata.

ALSO READ  'The Banshees Of Inisherin' star Barry Keoghan crosses another name off his directorial wish list: "It's remarkable what came out... It's freaky"

Rajeev took to his Instagram and shared some pictures from the family wedding with just a heart emoticon. The first picture shows the whole family together, including Sushmita’s parents and her two daughters Renee and Alisah. Rohman is seen holding the cute little child Ziana in her arms along with the Sen family.