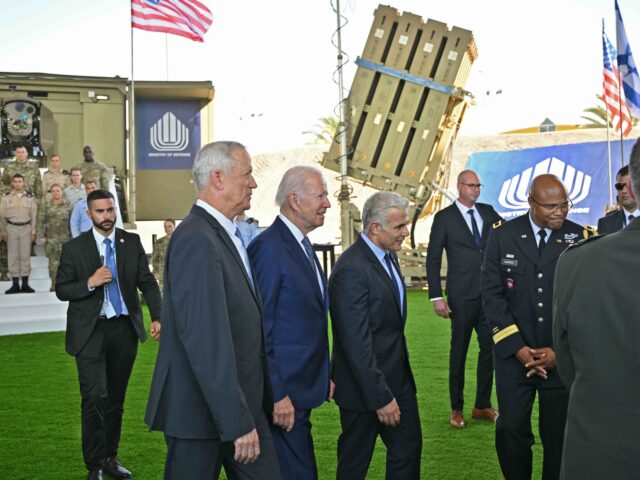 RAW FOOTAGE: This is when a barrage of rockets was fired from Gaza at Israeli civilians.

🚨Israel’s Iron Dome stops a barrage of rockets from #Gaza in the south #Israel pic.twitter.com/IM0ILvtI7e

PIJ took responsibility for launching it said 100 rockets from the Gaza Strip, which is controlled by another Palestinian terrorist group, Hamas.

Most of the rockets were fired around 9:00 p.m. and targeted towns and villages near Gaza, although some were pointed further north, according to Israeli army radio, as far as the town of Rishon LeTsiyon, south of Tel Aviv.

Some of the missiles were intercepted by the Iron Dome system, which has protected Israeli population centers from most of the missiles fired by Palestinian terrorists in recent conflicts.

Others exploded in Gaza without entering Israeli airspace. Israeli army radio reported that PIJ’s missiles are more primitive than the missiles Hamas has used in previous conflicts.

The Iron Dome missile system is receiving funding from US President Joe Biden, who visited an Iron Dome battery during his visit to Israel last month.

The PIJ missile launches were in response to an Israeli military operation called Operation Breaking Dawn that sought to prevent PIJ from launching what the Israeli government said were imminent attacks.

Tabari “was in charge of the terrorist group’s missile arsenal and was the group’s primary coordinator at Hamas,” the president said. Jerusalem Post reported.

It is unclear whether and to what extent the conflict will escalate. Israel is preparing for the possibility of further rocket attacks.

Israel faces elections this fall, a factor that could have played a role in Prime Minister Yair Lapid’s decision to launch the operation, as his party faces a strong challenge from the opposition Likud party, led by former Prime Minister Benjamin Netanyahu.

The conflict is Gaza’s second war in as many years, following four years of calm during President Donald Trump’s tenure.