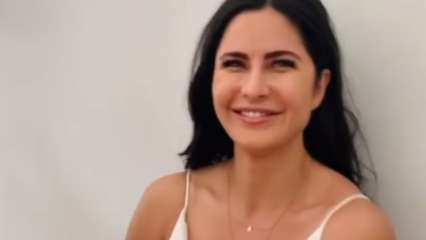 Katrina Kaif is back on sets. The actress actually shared a video from there where she was seen undergoing the mandatory COVID-19 test. Kaif was seen squirming as TBEN from his nostrils was taken with an earphone.

Katrina was seen in a simple white dress with no makeup on. After she squirmed, one of Katrina’s helpers was heard say “always smile”. Soon she broke a smile looking at the camera.

“It must be done – test for the #safetyfirst shoot (very important instructions from Danny ‘always smile’),” Katrina wrote, sharing the video.

Katrina has now returned from her shooting in the Maldives. She was on the island for five days with her crew. The actress had shared her photo with a face shield, mask and a thin bathrobe. The actor captioned the post: “Safety first (with an emoji mask) isn’t bad either.” She shared it with a slightly smiley face emoji.

During the lockdown, Katrina announced her next project – “Bhoot Police”. The film would see her face off against Ishaan Khatter and Siddhant Chaturvedi. The director of “Mirzapur”, Gurmmeet Singh, would direct the project.

Before the COVID-19 lockdown, Katrina was awaiting the release of her film ‘Sooryavanshi’, which would have seen her as the female lead. The film is now slated for release in the first quarter of 2021.

Revolving around Akshay Kumar, the film would also feature cameos by Ranveer Singh and Ajay Devgn. The film was the third installment in Rohit Shetty’s crime franchise. Ranveer had played “Simmba” before, while Ajay was considered “Singham”.

The actress is also reportedly engaged for her upcoming directorial film ‘Tiger Zinda Hai’ and ‘Bharat’ Ali Abbas Zafar. The filmmaker is currently in Dubai, waiting for the COVID-19 situation to calm down in Mumbai.

Ananya Panday on being trolled over her clothes: ‘as long as I have good photos to put on Instagram, I’m fine’