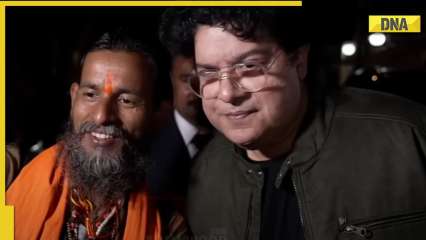 Former Bigg Boss 16 contestant and filmmaker Sajid Khan made his first public appearance after the reality show and he left the netizens in awe. Sajid was seen at the screening of Sidharth Malhotra-Rashmika Mandanna starrer Mission Majnu.

Sajid’s presence was received positively by the media and cameras and microphones followed the director. As they left the screening, several media persons asked Sajid about his experience with Bigg Boss. Khan gave short replies to the media and he then clicked selfies with fans. In the midst of the candid interactions, Sajid came across a priest and posed for him. While recording a video, the priest asked Sajid to chant Jai Shri Ram three times. Housefull’s director heard him, but ignored him and walked away.

As soon as the video surfaced, several netizens supported Khan and panned the fan chasing him to say Jai Shri Ram. One user wrote: “I am Hindu baki bro kisi ko jabardasti Jay Shri Ram nahin bula sakte or na Allah u Akbar sab apne apne dharm ka Aadar Karen (I am Hindu you cannot force someone to say Jai Shri Ram or Allah U ). Akhbar. Everyone must respect his religion).” Another user added: “Kiyu force karre ho jay siyar*am bolne ke liye yeh resson hai desh ko andhbhakto ne barbad kardiya hai..! Shame on you (why force someone to say Jai Shri Ram. Such andhbhakts are why us country is backwards).” A netizen added, “Why do these Hindus force Muslims to say jai shree ram.”

On the work front, Sajid will make his comeback as a director with 100%. Khan will helm the comedic entertainer starring Riteish Deshmukh, John Abraham and Shehnaaz Gill, and Nora Fatehi. Sajid’s last film as a director was Humshakals (2014).