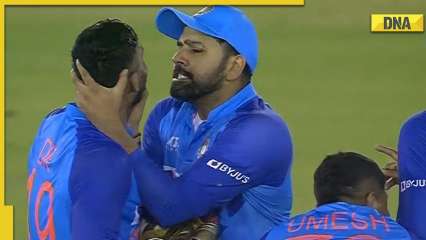 Team India skipper Rohit Sharma was in an animated mood in the first T20I against Australia on Tuesday. After a DRS review, Rohit was jokingly grabbed Dinesh Karthik’s face as fans called it “bromance” between Rohit and DK.

It so happened that Glenn Maxwell overturned Umesh Yadav’s delivery when the Indian players appealed. It looked like Karthik wasn’t so sure about the sound, but Rohit was absolutely determined.

Although the on-field umpire had ruled out that it hadn’t been ruled out, Rohit requested a review and the third umpire confirmed that the ball had indeed deflected off Maxwell’s bat after confirming it via ultra-edge.

Afterwards, Rohit was spotted jokingly grabbing DK while the pair talked about the incident.

Meanwhile, despite Umesh’s double whammy, the Men in Blue failed to limit Australia as the visitors recorded their highest ever run chase against India in the shortest format.

Matthew Wade played an undefeated 45-run knockout, while Cameron Green won the Player of the Match award after his 30-ball 61-run inning.

India will need to win both remaining matches to win the three-match T20I series against Australia as they have taken a 1-0 lead.

We hear you: Struggling superstar Triple H responds to WWE fans in India posting ‘Search For Merch’ on Twitter