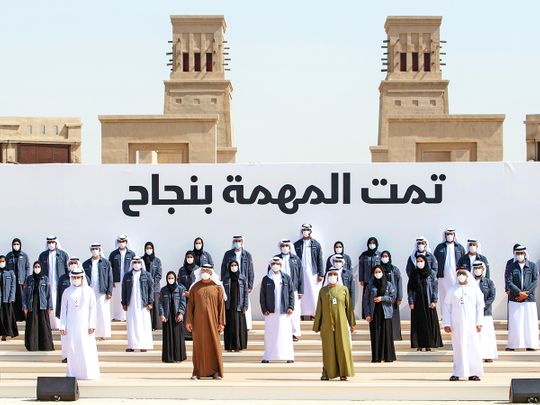 Dubai: The young Emirati engineers, who are members of the Emirates Mars Mission (EMM) Hope Probe team, were honored by UAE leaders at a special reception during the ministerial retreat at Bab Al Shams Tuesday.

The reception was held in recognition of the team’s efforts over the past six years to build and successfully launch the Hope probe that made history with its entry into Red Planet orbit on February 9. Hope Probe, which will provide the first full picture of Martian atmosphere, has placed the UAE as the first Arab country and the fifth in the world to reach the Red Planet.

Donation to the nation

Sheikh Mohammed bin Rashid said the historic achievement marked the UAE’s 50th anniversary as a milestone and paved the way for the next 50 years. He noted: “Celebrating the Hope Probe team at the ministerial retreat is a message that our plans for the next 50 years will be as ambitious as the Emirates Mars mission.” He added, “The Hope Probe is the best gift to dedicate to the people of the United Arab Emirates on the occasion of our country’s 50th anniversary. The journey 200 engineers took to design, build and launch the Hope spacecraft to Mars is part of the UAE’s journey to the future.

Sheikh Mohamed bin Zayed tweeted Tuesday: “Meeting the Hope Probe team today has been a great honor. This team of young Emiratis took the UAE to Mars with a determination and confidence that inspired us all. Their achievement is not just a moment in history, it is a gift to the nation that will last forever. “

Sense of belonging and pride

Sheikh Mohammed bin Rashid added: “Millions of Arabs felt a sense of belonging and pride as they watched an Arab spacecraft, named Hope, reach the farthest point they have ever been in the world. ‘universe. Speaking to the Hope Probe team, he said, “Today our scientists and experts are the true champions who will lead our country’s journey to further achievement, excellence and success. Our people are known for their humility and perseverance. They have their feet on the ground, but their ambitions reach the sky.

Sheikh Mohamed bin Zayed noted, “The Hope Probe team is the wealth of our nation. They have worked tirelessly and our country is reaping the benefits. Our young people made us proud, hoisted our country’s flag in deep space and carved our nation’s name into history. Our goal was not only to reach Mars, but to give our people the knowledge and confidence to build the capacity to lead the country to the top. The success of the Hope Probe team has raised the ambitions of the next generation. With the will and determination of our people, the UAE will continue to achieve greater achievements. “

He added, “We are starting the journey of the next 50 years with strength, with massive projects underway and a mission to prepare national expertise to lead the future. The UAE of the future will lead the scientific and knowledge development of the region. Our institutions are open for young people from the Arab world to participate in this journey.

He stressed: “Our meeting today has special significance because it comes after you have realized the hope that everyone has been waiting for. You have made your country, your family, your region and the whole Arab world very proud. What your children and grandchildren learn in school today will be different from what we learned in the past. By fulfilling the dream that many countries have longed for, you have created a new story for your country and your children and written great stories that we will tell for the next generation.

The UAE made history on February 9 with the successful arrival of the Hope spacecraft in orbit of Mars, to begin its scientific mission to provide the very first full picture of the Martian atmosphere.

Currently, Hope Probe is in its capture orbit, moving on a path of 1,000 km to its closest point to the surface of Mars and the furthest point at 49,380 km. During this phase, all instruments on board the Hope probe will be calibrated to ensure the accuracy of the data collected by the probe. The spacecraft will also perform three science transition maneuvers and the orbiter will be gradually transferred to its science orbit by April.

Hope has an expected elliptical science orbit of 20,000 to 43,000 km, with an inclination to Mars of 25 degrees. In this orbit, the probe completes one orbit of the planet every 55 hours and will capture a complete planetary sample every four orbits or nine Martian days.

The last phase of the spacecraft’s journey is expected to begin in April, when it will officially begin its scientific phase to complete the very first planet-scale, 24×7, image of the atmosphere of Mars for a full Martian year ( 687 Earth days) until April. 2023.

The probe, however, can be used for an additional two years for additional data collection. The three scientific instruments installed on the probe will allow the collection of 1000 GB of new data on Mars, which will be shared free of charge with more than 200 research centers around the world.