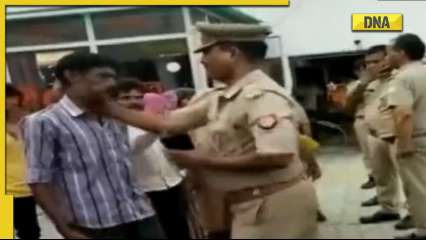 A police inspector in charge of Binauli Police Station in Baghpat was transferred and a departmental inquiry was launched against him after a video went viral on social media in which he allegedly punched a man on Saturday.

#WATCH | Baghpat, Uttar Pradesh: Binoli PS inspector attached to the police line and departmental action launched against him after a video of him beating a man who had filed a complaint about his missing niece went viral

The victim and his family had approached the head of Binauli Police Station to complain about their missing niece who had been missing for 4 days.

“We learned of the matter after the video made the rounds on social media. An initial investigation revealed that Inspector Birja Ram had behaved unethically towards the victim’s family on September 17. Inspector Birja Ram has been transferred to the police line of Binauli Police Station and a departmental investigation has been launched against him,” Neeraj KUMAR JADAUN, SP, Baghpat told ANI.

Victim Omveer told ANI: “Our niece has been missing for 4 days. We went there to inquire about the progress of the case, and while the police inspector repeatedly asked about our niece, the police officer hit me in front of everyone.”