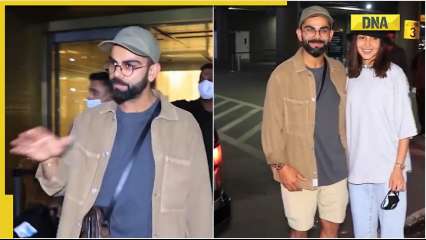 Virat Kohli and Anushka Sharma recently returned to Mumbai from their long vacation in London and Paris and the paparazzi were already waiting at the airport to greet the power couple. Virat and Anushka spent almost a month in England and France with their daughter Vamika.

Upon their return to Mumbai, Virat and Anushka expected the paparazzi to be there, so they already had something in mind. A viral video now spreading all over the internet shows Kohli getting out of the airport, but he urges the dads not to click on any pictures of Vamika.

He then tells them that he and Anushka would come back for pictures if they let Vamika pass. The dads obliged and later Virat and Anushka posed for the media.

Speaking of Kohli, he is currently on a break from cricket, having been rested by the BCCI for the ongoing tour of the West Indies and he will not be playing a part in the upcoming tour of Zimbabwe either.

The 33-year-old is expected to return directly for the 2022 Asian Cup, which starts on August 27, with the Men in Blue facing their arch-rival Pakistan on August 28.