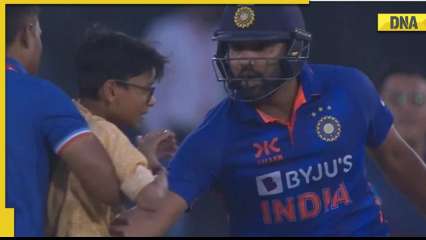 A determined fan managed to breach tight security measures at the Shaheed Veer Narayan Singh International Stadium on Saturday and rushed onto the pitch to face his idol, Rohit Sharma, during the second ODI between India and New Zealand. His daring performance was met with cheers from the audience as the young fan was able to fulfill his dream of meeting his hero.

Security personnel quickly escorted the young fan off the grounds. However, footage also surfaced of Rohit pleading with security officials not to take any action against the fan.

Rohit Sharma asks the security guard not to do anything against the fan.

Glenn Phillips topped the score for the New Zealand team with 36, while Michael Bracewell and Mitchell Santner contributed 22 and 27 respectively. Unfortunately, the rest of the team was fired due to single-digit scores.

India will secure the three match series if they are victorious in this match. The hosts emerged victorious in the first ODI, a high-stakes thriller played at Hyderabad on 18 January, by a margin of 12 runs.

NHL trade TBEN 2023 tracker: All moves leading up to March 3