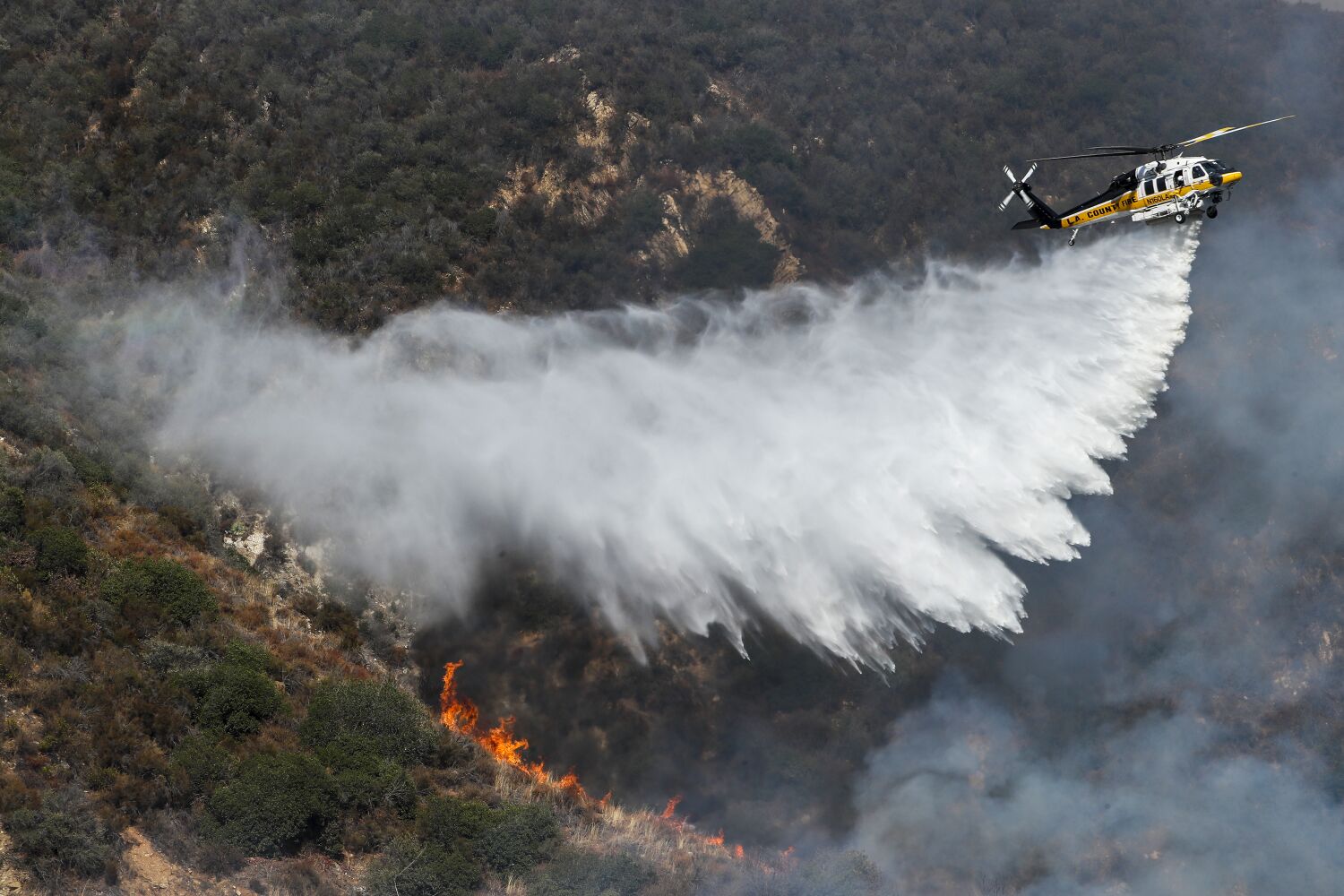 Despite months of warnings sparked by extreme heat and drought-parched conditions, California’s deadly fire season ended with remarkably little area burned, with just 362,403 acres scorched by 2022, compared to more than 2.5 million acres the year before.

Standing in a field of dry, brown grass in Napa this week, Governor Gavin Newsom and several state officials gathered to mark what they described as “the end of peak wildfire season” across most of California, with the relatively small acreage of the year was attributed to massive investments in forest health and resilience projects and an expansion of the state’s firefighting fleet.

But while the worst of the season may be behind us, experts noted that the markedly reduced fire activity is likely less a factor of strategy than luck.

“We got really lucky this year,” said Park Williams, an associate professor of geography at UCLA. “At the end of June it looked like the dice were very heavily loaded towards big fires because things were very dry and there was a chance of big heat waves in the summer, and indeed we did indeed have a really big heat wave this summer in September. But that coincided with some really well-timed and well-placed downpours.

Indeed, two of the year’s biggest fires — the McKinney fire in Siskiyou County and the Fairview fire in Riverside County — both continued to smolder after the arrival of downpours, including the unusual appearance of a tropical storm in the case of the Fairview fire, which helped to significantly increase its control.

“The precipitation came just when it was most needed,” said Williams. “The stuff got so dehydrated from these heat waves, and then at kind of a peak drought, suddenly the sky opened up and drenched everything, and it happened repeatedly.”

But while the acreage was relatively small this year, the 2022 fire season was also far more deadly than last year, with nine fatalities, all civilians, compared to three firefighter deaths in 2021. Some of the deadliest fires, including the McKinney — and Fairview fires, burned at a significant rate fueled by dried vegetation, leaving people with little time to escape.

Fires this year were also devastating: By the end of the 10-day run in September, the Mill fire in Siskiyou County had leveled the entire Lincoln Heights neighborhood of Weed. The McKinney and Oak fires in Mariposa County each destroyed nearly 200 buildings, while the Orange County coastal fire destroyed at least 20 homes in May.

Still, some efforts on the ground seem to be working. The state has responded to 7,329 fires this year — about 200 more than last year this time — despite far fewer acres burning, indicating crews put out fires faster or stopped them before they got too big.

Officials said several factors contributed to the overall tamer season, including a $2.8 billion investment in wildfire-resistance projects over the past two years for forest management, prescribed burns and community outreach.

“Over the past year, the tremendous amount of combined proactive efforts from state and local and tribal and federal agencies here in California has really led to less damaging, less destructive fire effects,” said Mark, director of the California Office of Emergency Services. Ghilarducci said during the press conference. “While some of this is clearly due to the weather, perhaps a bit of luck, that continued investment has clearly made a difference this year.”

Joe Tyler, director of the California Department of Forestry and Fire Protection, said the agency has completed more than 100,000 acres of fuel reductions each year since 2019, with about 20,000 acres in the past two months alone. That work was complemented by local, federal, tribal and private partners, he said.

“We’re aware that we’re not out of the woods yet, so we’re not here with any signs of ‘mission accomplished’ in any way, shape or form,” Newsom said, “but we’re here to get the job done.” to emphasize that has been done this year.”

The governor added that the state has deployed an additional 1,350 firefighters, allowing peak utilization as early as June.

Williams warned that officials “have to be very careful about claiming the luck that the weather brings, because next year the dice will be reloaded for a really big fire season, and [they] have not treated all California forests in one year.”

He added that other states under different management were similarly lucky this year, including Nevada and Arizona, which also avoided extreme fire seasons despite high heat and other conditions that prepared them for blazes.

But Scott Stephens, a professor of fire science at UC Berkeley, said he credits Cal Fire and other government agencies for some of their programs.

“Some of the wildfires that started this year hit some of their fuel-treated areas, and they were able to hold more effectively in some of those areas,” he said. “That wasn’t the majority of the fires by any means, but some … actually reached these areas, and the proactive work I think is paying off on that front.”

However, Stephens also noted that the state has seen no major dry lightning events this year, such as those that helped fuel hundreds of simultaneous fires in 2020 and 2021, and benefited from some rainfall. He said it’s important to remain vigilant, even with improvements.

ALSO READ  Four ways Republicans can change our country by 2024

“There are really only two fire issues in the state that are of paramount concern,” he said. “One is to better prepare people living in fire-prone areas for the inevitability of fire, and the second is to better prepare our ecosystem for fire, climate change, bark beetles and drought. … If we don’t get both things done on a really significant level, we’ll never get out of this problem.

Officials this week remained optimistic about the outlook, highlighting investments in new technology aimed at faster detection and response to fires, including advanced aircraft known as FIRIS, or the Fire Integrated Real Time Intelligence System, and the creation of a Wildfire Threat Information Information Sharing Center co-operated by Cal Fire and Cal OES.

The state also created a Community Wildfire Preparedness and Mitigation Division this year to help communities better prepare for fires, Ghilarducci said. Investments in mitigation resources and home hardening include $100 million in community infrastructure grants and $25 million in outreach to highly vulnerable communities.

Yet he also acknowledged that his four years as governor were marked by climate volatility. While 2022 and 2019 were relatively tame fire years, 2020 marked the state’s worst-ever fire season, as more than 4 million acres burned down.

“I don’t expect anything but extremes: extreme heat, extreme drought, extreme weather, extreme polar ends. The norm has been that kind of whipping back and forth,” he said. “I think we tend to exaggerate everything we’ve done well in a year like this, but I also don’t want to underestimate that this has been a flywheel.”