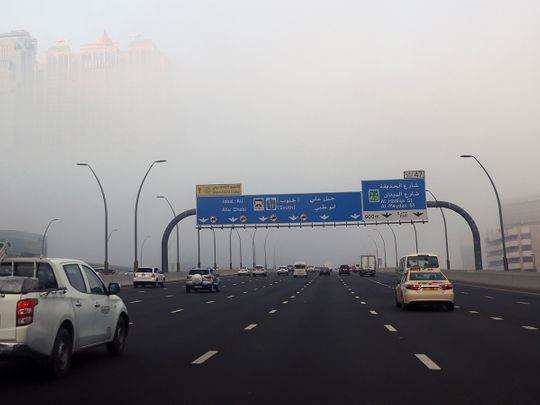 Monster fog blanketed the skyline of Abu Dhabi, Dubai, Sharjah and Ajman once again this morning. UAE police urged motorists to be careful and drive slowly, as the fog formation resulted in poor visibility on roads across the country.

The National Meteorological Center (NCM), issued a red alert and warned motorists: “A risk of fog formation with deterioration of horizontal visibility over most inland and coastal areas until 9:00 am today” .

The NCM also forecast a partly cloudy sky and added that clouds will appear eastward in the afternoon and that it will be rather warm during the day across the country.

In coastal areas, maximum temperatures will be between 32 and 36 ° C and between 20 and 26 ° C in mountainous regions.

Relative humidity is expected to increase at night and on Friday mornings, particularly over coastal and inland areas, causing fog and fog to form.

The seas will be light to moderate in the Persian Gulf and the Arabian Sea, the NCM added.