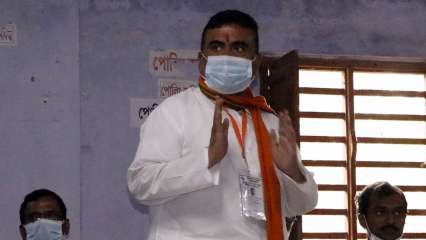 In its notification, the EC requested Adhikari to present its explanations within 24 hours of receiving the opinion, failing which the committee “will make a decision without further reference to you”.

A complaint against Adhikari was lodged by Kavita Krishnan, a member of the CPI-ML central committee, where she alleged that on March 29, Adhikari, a BJP candidate from Nandigram, made a hate speech at a public meeting. .

ALSO READ  No new authorization for hydroelectric projects in the upper Ganges region in 6 years: Center

An authenticated transcript of the alleged speech was also received from the Chief Electoral Officer of West Bengal, the commission said, adding that the relevant part of the speech read: “I love to sing and hear kirtans. You. On the one hand, Begum is competing with us … You don’t give Begum a vote. If you vote for Begum, there will be a mini-Pakistan. A Dawood Ibrahim has come to your locality . “

It should be mentioned here that Chief Minister Mamata Banerjee is fighting Adhikari in Nandigram.

In another part of the speech, Adhikari said, “What puja comes next? Ramnabami. With what flower did Ramchandra worship Maa Durga? So you should all vote for Lotus.”

The commission said that the statement made by Adhikari on March 29 had been examined and that the same had been found to be contrary to clauses (2) and (3) of part I of the model code of conduct for parties. politicians and candidates.

The commission asked Adhikari to explain his position for making the aforementioned statement within 24 hours of receiving the opinion, failing which the commission will make a decision without further reference to him.

Elections for the Bengal Assembly, which has 294 members, take place in eight phases. While the first three phases have been completed, the remaining five phases will be held on April 10, April 17, April 22, April 26, and April 29. Results will be announced on May 2.