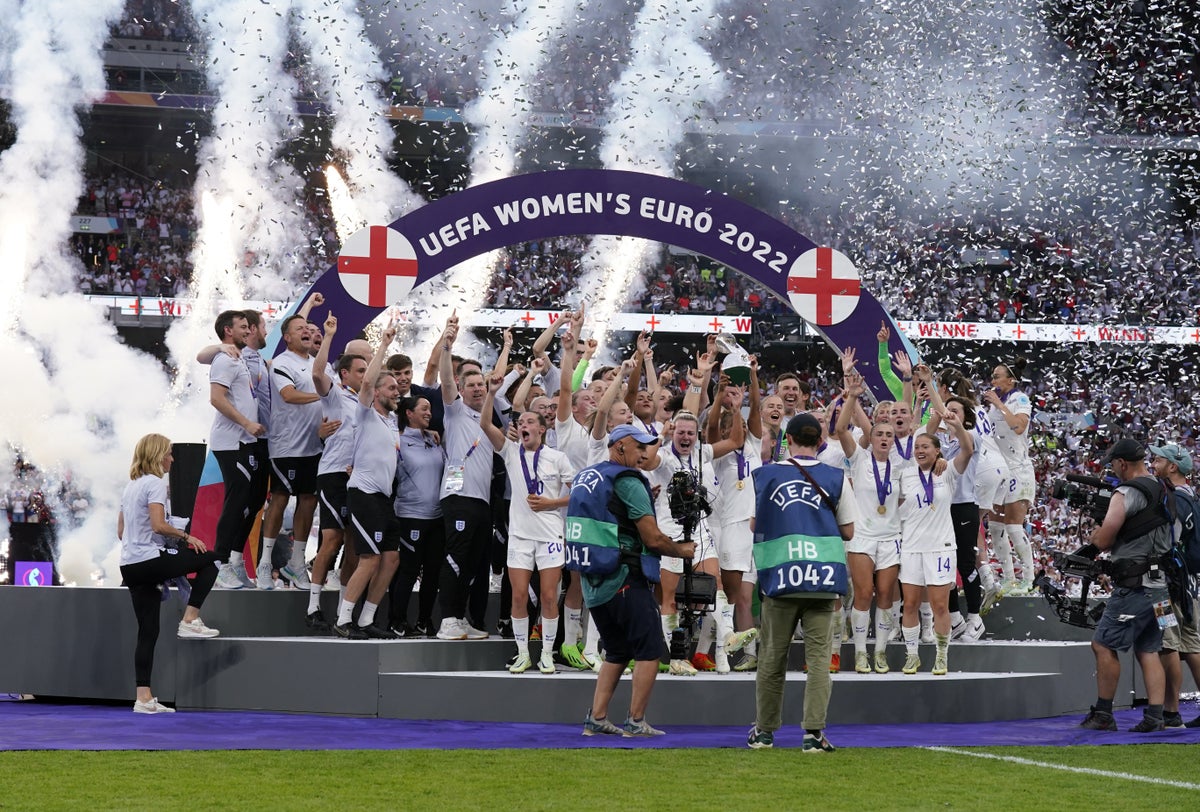 England’s cheering players crashed Sarina Wiegman’s press conference and received congratulations, including a message from the Queen after beating Germany at Wembley to be crowned Euro 2022 champions.

Chloe Kelly’s extra-time goal sealed a 2-1 victory as the Lionesses claimed the first major trophy in their history and the first for a senior England since the 1966 World Cup win over West Germany.

Kelly pushed past Merle Frohms in the 110th minute to restore the tournament hosts’ lead after fellow substitute Ella Toone’s stunning lobed opener was wiped out just after the hour by Lina Magull with 11 minutes of normal time left.

The dramatic match was watched by a crowd of 87,192 at the national stadium – the largest attendance ever for a Euro match, men or women.

England boss Wiegman was in the middle of her post-game press conference when her cheering squad burst into the room, chanting “it’s coming home” and dancing around the top table, while goalkeeper Mary Earps and defender Lucy Bronze topped it off.

The party was set to continue on Monday with Wiegman and the players attending a celebratory event in Trafalgar Square, which could hold up to 7,000 fans.

Wiegman, who has now won back-to-back Euros after her 2017 success with the Netherlands, said: “I think what we’ve done is really incredible.

“I don’t think I’ve really realized what we’ve done because I haven’t followed everything, but we know all of England is behind us.

“We’ve had so much support from our fans and I’m so proud of the team, the players and the staff.”

Wiegman then closed her press conference with the simple statement: “We have changed society today.”

In a post shared on the Royal Family’s Twitter account, the Queen said: “My heartfelt congratulations, and that of my family, go out to all of you on winning the European Women’s Football Championship.

“You have all set an example that will be an inspiration to girls and women today and generations to come.”

The Duke of Cambridge, who is president of the Football Association and handed over Sarina Wiegman’s medals, also congratulated the team, tweeting: “An incredible win @lionesses and the whole nation couldn’t be more proud of you all.

“Great to see history in the making at Wembley tonight, congratulations! W.”