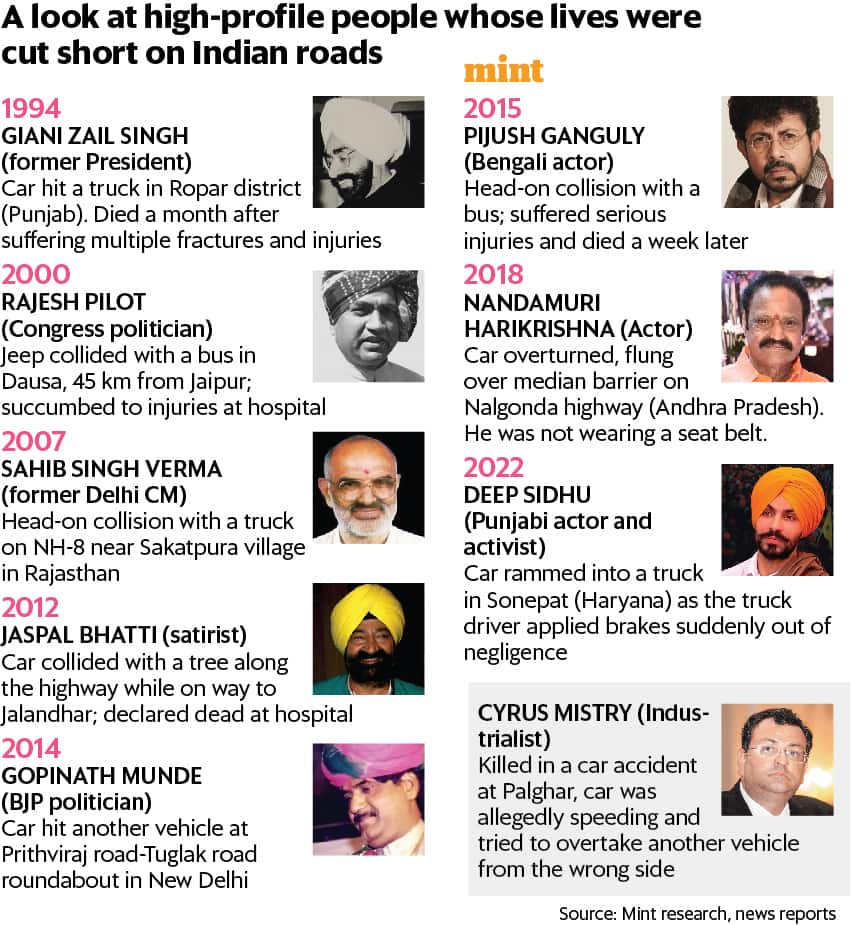 It’s no secret that the roads in India are a powerful killer. The high-profile death of former Tata group chairman Cyrus Mistry on Sunday afternoon, drawing condolences from India Inc and political leaders, including Prime Minister Narendra Modi, has once again brought attention to how bad things can get. When Transport Minister Nitin Gadkari claimed early last year that road accidents are “more serious than the Covid-19 pandemic”, he was not wrong.

A record 155,622 people were killed in traffic accidents in 2021 and 371,884 were injured, according to National Crime Records Bureau (NCRB) data released last week. This is despite the country being locked up for most of the summer due to the second wave of the pandemic. This is based on reported incidents only. The actual numbers may be higher.

The disproportionate impact can be measured by the fact that India, with just 1% of the world’s vehicles, is responsible for 11% of all crash-related deaths, the highest in the world, according to a 2021 World Bank report.

Mistry joins a long list of prominent personalities who have lost their lives in road accidents, from the death of former President Giani Zail Singh in 1994 to Bharatiya Janata Party politician Gopinath Munde, who died in Delhi just days after he was sworn in as Union minister in 2014. Popular satirist Jaspal Bhatti (2012) and more recently, Deep Sidhu, met a similar fate ten years apart. The reasons and the culprits vary in each case, but the reality is that despite our vast road network, non-compliance with road safety rules and excitement for speed often turn Indian roads into killer fields.

ALSO READ  There will be more self-checkout, no matter how much you hate it

About 42% of all road accident-related deaths in 2020 were due to a lack of safety equipment, the latest available data from the Ministry of Transport shows. The Central Motor Vehicle Rules make seat belts and helmets mandatory, even for passengers in the back seat. Mistry reportedly sat in the back seat of the ill-fated Mercedes Benz and was not wearing a seat belt.

Most such deaths are on two-wheelers without helmets, much more often among the drivers than among the pillion passengers. In quadricycles, drivers and passengers were equally likely to die without a seat belt. Since they became mandatory, seat belts have saved countless lives and could reduce the risk of a fatal accident for rear seat passengers by 25-75%, according to a World Bank report. Because highways allow higher speeds, they are also much more deadly. National highways were responsible for a third (34%) of all traffic accident-related deaths last year, followed by state highways (25%), according to data from the NCRB.

In 2021, Tamil Nadu reported the highest number of road accidents, while Uttar Pradesh witnessed the most road accident-related deaths. However, it was Bihar that emerged as the worst affected state as the death rates were adjusted for the population. The eastern state also reported 80 deaths per 100 traffic accidents, the worst among the major states. The states of Goa and Kerala stood out with only seven and ten deaths per 100 accidents respectively, implying that accidents are not always fatal. Mizoram, Nagaland and Meghalaya reported very high fatality-to-accident ratios, indicating that most road accidents in these states are fatal.

ALSO READ  Who is Simone Tata, the only member of the Tata family to attend Cyrus Mistry's funeral?

North India reported the highest number of road deaths, followed by the south. More than 300,000 people were injured in traffic accidents in 2021. Kerala, which has a low fatality-to-accident ratio, was the fourth most affected state, with 36,514 injured in 2021.

Speeding is the leading cause of death on Indian roads. The drive for speed resulted in more than 87,000 deaths, or nearly 56% of India’s total road crash-related deaths. The next biggest cause was “dangerous driving and overtaking”, with more than 27% of road crash related deaths. Bad weather conditions such as dense fog, slippery roads during rain were the third biggest cause, data from the NCRB showed.

Accidents have also been reported due to poor road conditions, non-compliance with traffic rules and drivers being distracted. According to NCRB data, nearly half of all road accidents in the country involved two-wheelers, followed by cars (15%). The lack of pedestrian-friendly roads resulted in the third highest number of casualties in 2021 (12%).

Mistry’s death is a stark reminder that we still have miles to go before India’s roads become safe for all.

The office gym is finally back, and so is your sweaty boss

‘Note of rich nation with poor population comment taken out of context’, says Gadkari as Oppn raises the bar

The Bharat Express News - September 30, 2022 0
Ed Sheeran must plead his case in front of a jury, a judge has ruled after he was accused of removing elements of his...

Uganda Ebola Outbreak: Why Is It So Serious?