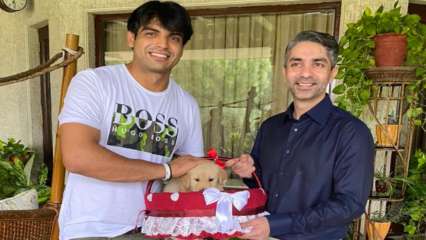 Five-time Olympian and 2008 Beijing gold medalist Abhinav also hoped the new puppy would motivate Neeraj to give him a sibling named ‘Paris’ at the 2024 Olympics. “It was a pleasure to meet and interact with the golden man from India @ Neeraj_chopra1! I hope “Tokyo” will be a friend who will support you and motivate you to give him a brother and sister named Paris in 2024! ” Abhinav Bindra tweeted on Wednesday.

It was a pleasure to meet and interact with the Golden Man of India @ Neeraj_chopra1 ! I hope that “Tokyo” will be a united friend and will motivate you to have him a brother named Paris in 2024! pic.twitter.com/54QxnPgDn8

Last week, capitalizing on his growing popularity, Olympic champion Neeraj Chopra introduced his new avatar to the screen thanks to his acting skills. Featured in an advertisement, the 23-year-old javelin thrower can be seen describing how people now behave in front of him after his success at the Tokyo 2020 Olympics.

Neeraj’s success on the final day of the 2020 Tokyo Olympics made the athletics star a household name across the country. Scoring India’s first-ever Olympic gold in a track and field event, javelin thrower Neerajs’ sensational performance on the pitch seamlessly translated into a digital phenomenon, making the 23-year-old athlete extremely popular on social media.

Since the day Neeraj won Olympic gold, his stock has skyrocketed on social and digital media. According to a report by research consultancy YouGov SPORT, Neeraj Chopra recorded over 2.9 million mentions from over 1.4 million authors, making him the ‘most mentioned’ athlete in the world on Instagram during the Tokyo Olympics in 2020.

The Bharat Express News - October 27, 2021 0
Sara Sampaio has put her New York City East Village apartment on the market for $ 3.45 million, which means she's on the verge...