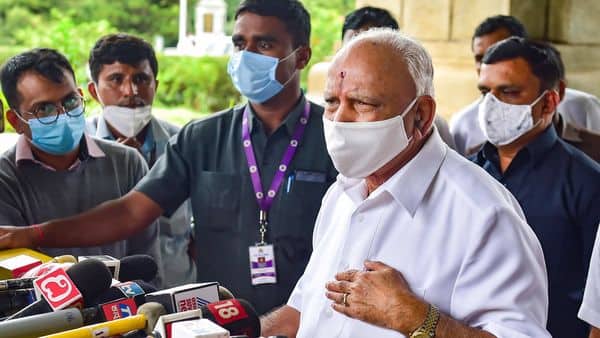 Amid strong speculation over his exit from the chief minister’s office, BS Yediyurappa of Karnataka hinted on Thursday that he would step down as state CM after July 26, when his government completes two years. However, the Karnataka chief minister said he would obey his BJP party.

Speaking to reporters in Bangalore, CM Yediyurappa said: “There is an event on July 26 at the end of two years of our government here. After that, I will follow whatever JP Nadda decides.”

The 78-year-old said “so far” that he had not been asked to resign. “When the instructions come, I will resign and work for the party. I haven’t recommended any names. The party’s high command hasn’t told me anything. Let’s see what happens after July 26,” Yediyurappa added.

“It is my duty to bring the BJP back to power. I urge party workers and visionaries to cooperate,” he added.

CM Yediyurappa was originally scheduled to attend a legislative party meeting on July 26 and hold a lunch with MPs on July 25, but schedules have now been rescheduled.

“The privilege of being a loyal BJP worker”

Earlier Wednesday, CM Yediyurappa said he had the privilege of being a “loyal BJP worker”.

He also urged his supporters not to “engage in protests and indiscipline disrespectful and embarrassing for the party.”

“I have the privilege to be a loyal employee of the BJP. It is my greatest honor to serve the party with the highest standards of ethics and behavior. I urge everyone to act in accordance with the ‘party ethics and not to indulge in disrespectful and embarrassing protests / indiscipline for the party, “he said in a tweet.

His trip to Delhi had raised questions in some quarters whether the party is now developing a succession plan.

On his return from the capital, CM Yediyurappa had however denied in certain circles that he was about to leave and affirmed that the central management had asked him to remain in post.

Noting that it is his duty to strengthen and bring the party to power, Yediyurappa urged BJP workers not to be confused and to cooperate with him.

“No one should make a statement in my favor or engage in any form of protest. It is not appropriate, I call for cooperation, without engaging in such things,” added the CM of Karnataka.

Support continued to flow for Yediyurappa from Mutts, pundits, political leaders across the party line, amid speculation his exit was on the cards.

Leaders and pontiffs, especially of the Veerashaiva-Lingayat community, as well as All India Veerashaiva Mahasabha have declared their support for Yediyurappa and called for his retention as chief minister, while warning of “bad consequences” for the BJP if replaced.

Hundreds of pontiffs from various communities have blessed and supported me, said CM Yediyurappa: “I cannot forget this all my life. No one has received such support in the past … with their blessing, I will operate according to the decision of the high command. “

Extension of the Karnataka cabinet: CM Basavaraj Bommai in Delhi to consult the best brasses