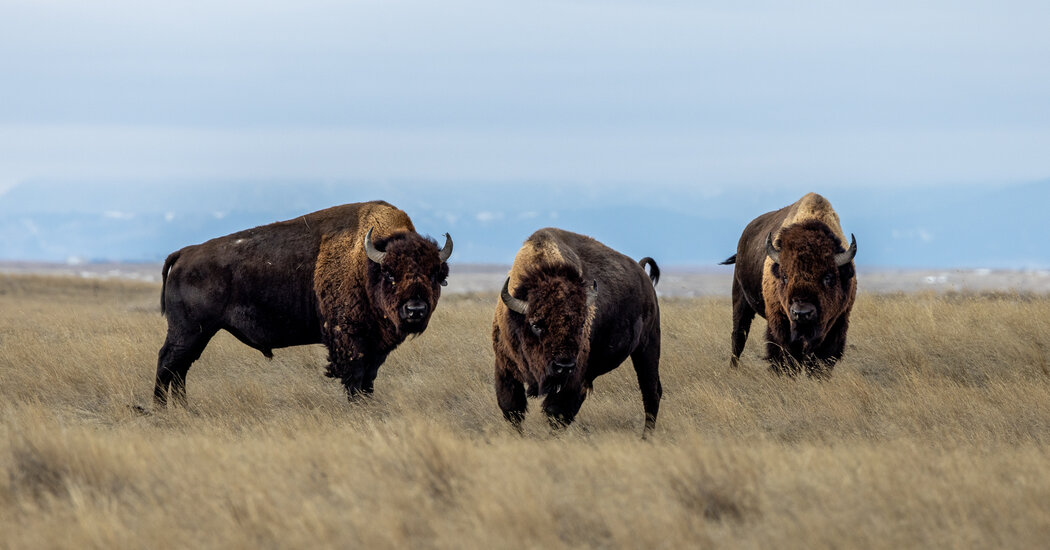 MALTA, Mont. — About 200 chocolate brown buffalo rear their heads to follow the low growl of a pickup truck as it moves slowly across the sagebrush-strewn prairie.

Sniffing and roaring softly, their wild scents drifting on the wind, they trot slowly over the hills of the prairie, eager to keep their distance from the truck.

This bison knot – colloquially referred to as buffalo, although it is not the same species – is part of a project to rebuild a vast short-grass prairie, not only to bring back large numbers of bison here, but also to eventually restore the complex and productive grassland ecosystem that the animals once created with their swirling hooves, droppings, grazing and even carcasses.

“When you have large numbers in the landscape, they affect everything,” Scott Heidebrink, the director of bison recovery for American Prairie, a nonprofit conservation group, said of the animals. “There are ways bison affected the landscape that we haven’t even thought about.”

Since 2001, American Prairie – formerly known as American Prairie Reserve – has been working to create a fully functioning wild prairie, complete with herds of bison thundering through the landscape playing their historic ecological role.

Experts originally thought it would take about a decade to restore the bison-powered grassland ecosystem that would in turn replenish native species, including countless grassland birds, river otters, prairie dogs, grizzly bears, and wolves—all of which have been eliminated or diminished, largely through agriculture and Cattle breeding.

However, land costs, politics and other complications have pushed that goal far into the future and achieving it has proven difficult. Researchers and experts have since become more realistic and understand that the original time frame for creating such an extensive grassland simply isn’t feasible.

Between 30 million and 60 million bison once roamed parts of the United States, primarily in the Great Plains. They were a “keystone” species in a complex ecological web, creating a cascade of environmental conditions that benefited countless other species.

Intact grasslands are very productive for biodiversity. Due in part to the loss of bison and other megafauna, intact grassland biomes are now among the most endangered in the world, and the numbers of many species that depend on them have collapsed.

Agriculture has also taken a huge toll on the prairies. “It’s quickly plowed and mismanaged for livestock,” said Curt Freese, wildlife biologist and one of the founders of American Prairie. Nearly a million acres in the region of eight counties surrounding the reserve have been converted to cropland in recent years, said Dr. Freese.

The primary task here now, say researchers and managers, is to increase the number of bison and acres. In 2008, more than two dozen ecologists and experts estimated in a paper known as the Vermejo Statement that to foster a functioning prairie ecosystem, at least 5,000 bison would need to be able to migrate freely on some 450,000 contiguous, fenced acres.

The first 16 bison were brought to the American prairie in 2005, and their numbers have grown to 774. The reserve’s goal is to settle 6,000 bison on 500,000 contiguous acres, said Mr. Heidebrink. However, the most difficult part of the task was building up enough land.

One day, the bison on reservations, American Prairie and nearby wildlife refuges in the United States and Canada could become one huge herd, roaming about 3 million acres. Native American communities in Montana, including the Fort Belknap Reservation and Blackfeet Nation, already have their own herds.

A full-fledged prairie ecosystem is still decades away, and it won’t come cheap: Dr. Freese, who is writing a book on the return of wildlife to the plains, estimates it will likely cost several hundred million dollars.

Recent studies have shown some of the important ecological effects that bison have on grasslands. A long-term comparative study of bison and cattle on the tallgrass prairie in Kansas showed that for about 30 years on land grazed by bison, native plant species richness doubled compared to places grazed by cattle, and the presence of bison made the prairie ecosystem more resistant to drought.

Widespread commercial hunting of bison hides, and a strategy to eliminate them to force Native American tribes to submit to reservation life, had nearly wiped out the animals in the United States by the 1880s, down to a few small herds in the west, also in Yellowstone National Park. Now there are hundreds of thousands of bison scattered across the West, but many scientists consider them “ecologically extinct” because they no longer congregate in large herds, roam free in vast landscapes, and fulfill their ecological role.

Even without those herds, bison act as “ecosystem engineers,” improving not only their own habitats, but also those of countless other species, including plants, birds and insects.

This is partly because bison graze less intensively over greater distances; tracking collars show they move more than three miles a day, while cattle travel about half that far.

“You can have areas that are completely bare or areas with very short grass or taller grass or shrubby or shady areas,” said Hila Shamon, a research ecologist at the Smithsonian Conservation Biology Institute who studies bison ecology on the reservation. “Different species use these different little spots. They need that. If you don’t have that complexity in the landscape, you lose some of those species.”

While cattle can be managed to mimic some of these benefits, bison do so naturally.

The way bison graze also provides more food, and new food is the most nutritious for the ecosystem. “Same as mowing grass in your front yard,” said Dr. Shamon. “If you mow it, it will grow back, it will regenerate. Bison have the same impact on grasslands. They mow the grass and mow the lawn, increasing productivity all the time.”

In winter, bison use their giant heads to clear snow to get to the grass below. “That little patch gets more sunlight and all the urine that was deposited there, and more moisture from spring events allows for rapid growth of succulents in the spring,” said Wes Olson, a bison expert who worked to return the animal to Grasslands National Park. in Alberta for Parks Canada.

Because bison can tolerate warmer temperatures than cattle, they are considered better for the health of the streams that flow across the prairie. When temperatures reach the low 80s, cattle seek out the cool waters of the creeks, eating and trampling vegetation and stream banks, while bison continue to graze the highlands.

Many species of birds and deer also use healthy riparian areas, which are co-created and maintained by the wisents. Replacing cattle with bison can be a passive way to restore the growth of shrubs and grasses along the streams grazed by the cattle.

More than 300 bird species live here or migrate through the shortgrass prairie, fed on a diversity of insects that thrive in part because of the ways bison wallow. Bison rolls in the dust as a way of grooming themselves and deterring vermin; as they do, they plant seeds that are carried in their coats and create depressions, where water collects to feed those plants, creating new habitats for insects and birds.

“In virtually every ecosystem currently grazed by bison, all grassland songbirds line their nests with bison hair,” says Olson, the co-author of the book “The Ecological Buffalo,” which details the many ways bison are connected. to grassland ecosystems. “It isolates and increases chick and egg survival by up to 60 percent.”

Even when dead, bison are crucial players in the ecosystem: Their carcasses feed a variety of species, and as they decompose they release nitrogen, potassium and other nutrients, a shot of adrenaline in the ecosystem.

There are other reasons why the bison herd here today is not yet the wild, free-roaming population that American Prairie envisions. In Montana, bison are considered livestock, not wildlife, meaning they are not free to roam. Some state officials strongly oppose bison being classified as wildlife such as moose and deer because, if allowed to roam freely on federal land and elsewhere, they would compete with cattle for food.

Critical natural elements of a wild prairie, such as fires, are also absent, meaning bison no longer follow the old rhythm of migrating to find new grass to grow in the aftermath of a wildfire or rainstorm. However, those who started this project still believe that there will eventually be another wild herd roaming the prairie.

Until American Prairie can expand its herd, the group donates excess bison to neighboring Indian reservations. On a recent cold, sunny morning, members of the Chippewa Cree Tribe, which only recently received federal recognition, picked up five young bison.

“There are six bison herds all within a hundred miles of each other,” said Dr. Freese. “My long-term vision is to develop a co-management system, where bison roam freely all over that landscape. You could have a herd of 50,000 bison.”

The post Where the Bison Could Roam appeared first on New York Times.