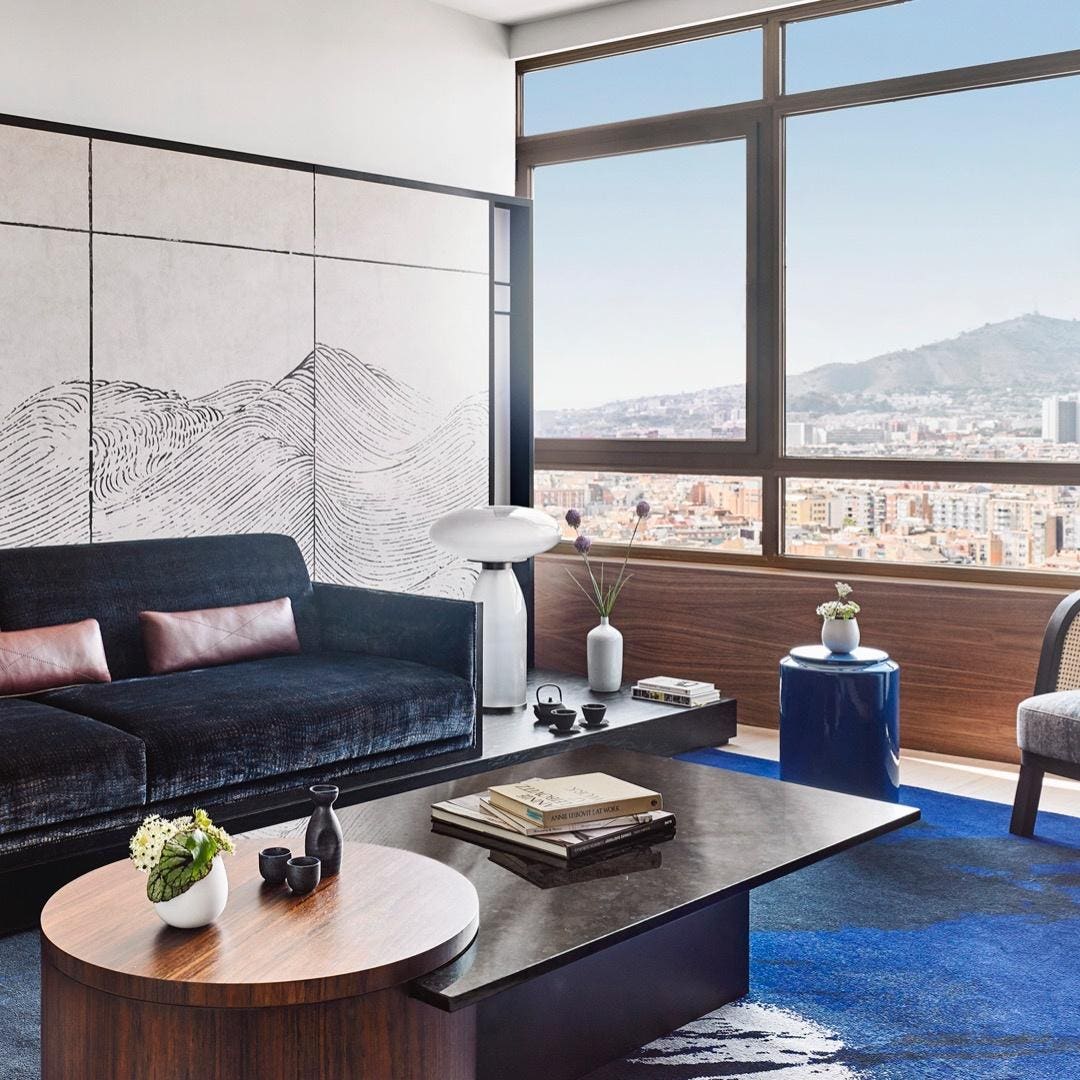 Fall in Barcelona serves two delightful seasons in one: the Mediterranean summer sun during the day turns into a cool breeze designed for walking at night. That – not to mention plane tickets finally back on Earth – is a good reason to catch a flight to Spain and check out two fantastic newcomers to the Barcelona scene, both opened in the months before the pandemic and so enjoying their real debut this year.

NOBU HOTEL BARCELONA Have you ever loved a restaurant so much that you wanted to move in? That is the concept behind the almost ten-year-old Nobu Hotel brand. The Japanese eatery won legions of fans by eschewing the trendy for the effortlessly excellent. These are certainly promising qualities for a hotel – and Nobu Hotel Barcelona delivers. The aesthetic is minimalist and refined, with dark woods, bronze accents, clean lines and artful Japanese touches: slippers and bathrobes, tea sets, ink paintings and Kintsugic artisan pottery decor. Magnificent views of the city from nearly all 259 rooms and suites remind you that you are in fact in Catalan and not in Japan; I had the glorious experience of taking a bath next to the famous Sagrida Familia, visible from the palatial bathroom of my serene 22nd– floor suite.

Other highlights include a super-convenient location, near Plaza de España and across the street from Sants train station; a soothing basement spa with Natura Bisse products and a plunge pool (the 3D Collagen Shock treatment lives up to its name); a lobby cocktail bar serving divine tapas (for when you’re – gasp! – tired of sushi); and, of course, the eatery of the same name, on top of it all, offering you the once-in-a-lifetime experience of feasting on all your Nobu favorites while feasting your eyes on panoramic vistas of an iconic city.

SIR VICTOR HOTEL You came to Barcelona to shop, ogle Gaudi masterpieces, clock in some beach time and, in general, soak up an atmosphere like a local. Sir Victor Hotel lets you do all of the above – in style. The chic 91-room property is located just off the shopping mecca Paseo de Gracia, a stone’s throw from Gaudí’s masterpiece Casa Milà and within walking distance of other Gaudi icons; it’s also a short drive from the beach and as embedded in the local style and culture as can be. This is apparent upon entering: the funky lobby is decked out with art from Barcelona-based artists, and the MR PORTER steakhouse is buzzing with local trendsetters.

But mostly locals attract The Club, where the hotel also serves: a members’ club complete with coworking space and a full calendar of activities, from book reviews to DJ nights – all for hotel guests to participate in. And oh, I did. I loved the plush Club space, complete with a curated collection of books dedicated to the legacy of Caterina Albert i Paradís, a 19ecentury Catalan feminist author after whom the hotel is named (passing as a man, her pen name was Victor Català) and the reason why the facade of the property resembles a book. The club’s staff advised me on cultural events in the city and invited me to their fall programming.

They also pointed me to the roof, where there were DJ sessions every night. There I swam in the lap pool and dined on beef and lamb meatballs, seared Hamachi with ajo blank, Greek salad and swordfish with lemon and oregano. Before checking out, I treated myself to one of the most therapeutic massages of my life at The Signature Spa, the first organic and vegan spa in Spain – a real gem.

LOCAL TIPS Yes, it’s a trendy hotel chain, but The Barcelona Edition has taken care of “local” down to the last detail. I spent a sexy evening there, dining first at Bar Alegria, a tribute to classic Catalan cuisine: there was truffle tortilla, lamb stew, anchovy toast, potato salad (oddly, a Catalan staple) and an extensive local wine list. I talked about books and politics with the wise, witty bartenders on the rooftop, which also offers an Asian street food menu and lavish views of the city. Then I went down to the basement club Cabaret, decked out in red velvet and dripping with sensuality, sipping a Bocaccio (made from Mezcal, Amaro Montenegro, Blackberry Sage Cordial, and lime juice) and pretending it was 1974 and I was in Spanish edition—pun intended!—from Studio 54. The next night I took things in a very different direction, enjoying West African food and tunes to kabongo, a delightful restaurant and lounge. After many nights of tapas eating, a large plate of jollof rice was a welcome treat.

What position should I sleep in and is there a ‘right’ way to sleep?