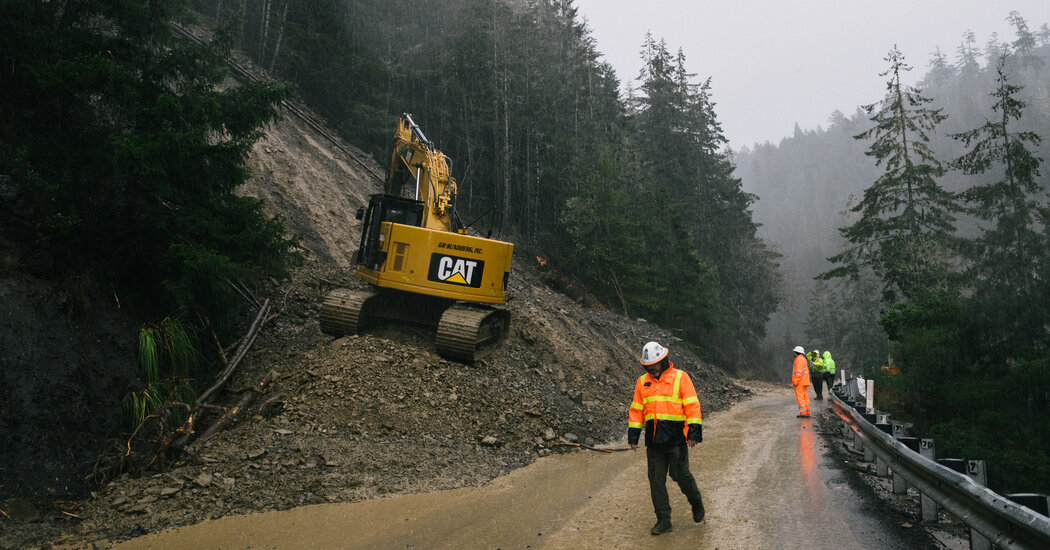 California’s latest storms wreaked havoc on travel conditions in the state on Saturday, with icy roads choking traffic in the Sierra Nevada mountains and torrential downpours cutting roads south of San Francisco along the Central Coast.

By Saturday afternoon, mountain highways were closed several times after cars and trucks lost control and were flung about by the high winds and heavy snow. In warmer parts of California, soil still saturated from the previous two weeks of storms created conditions for mudslides and flooding.

“During the height of the storms, stay home and watch the football games or relax,” Gilbert Mohtes-Chan, a spokesman for California’s Department of Transportation, or Caltrans, said in an interview Saturday.

Driving conditions were especially treacherous in the northeastern part of the state. Late Saturday morning, the National Weather Service said it was “dangerous to impossible” to travel in the Sierra Nevada due to whiteout conditions.

Earlier in the day and overnight, sections of major highways that cross the mountains, including Interstate 80 and Route 50, were closed multiple times due to vehicle spinouts and whiteout conditions. As of 12:30 a.m. Pacific, part of Interstate 80 was closed due to poor visibility and part of Route 50 was closed for avalanche control.

in Santa Cruz, California Highway Patrol alerted people not to drive unless necessary and said the threats included downed cables and trees, flooding, sinkholes and slides. About 50 miles south of San Francisco in the coastal town of Pescadero, a mudslide caused a road to close indefinitely and one close by partially collapsed.

Wildfire-burnt areas were particularly vulnerable to the heavy rains, including about 60 miles northwest of Sacramento at Rumsey Canyon, where a highway was closed on Saturday due to a landslide. Mr Mohtes-Chan said badly burned areas are vulnerable to slides because the burned layer of the ground can be hard and shell-like. When looser soil above the hard layer becomes saturated with water, it can slip out.

Flooding and mudslides were also a concern in Southern California, although storm conditions on Saturday were less severe than in Northern and Central California.

Mr Mohtes-Chan said people who need to travel should prepare for and be aware of the conditions including traffic delays, flooding and blowing snow. Caltrans has an online map that shows the current traffic situation.

He also warned drivers to stay on major roads, even if navigation apps such as Waze or Google Maps advise drivers to use apparently less busy and more rural roads. “There are people who get stuck in the snow, and then the mobile service is spotty and they are stuck because they have deviated from the main routes,” said Mr Mohtes-Chan.