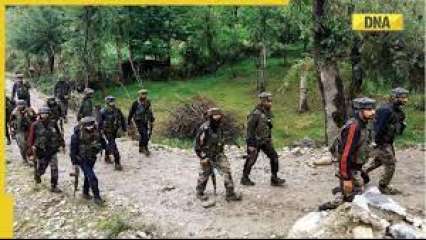 New Delhi: An ex-journalist from Kashmir identified as Mukhtar Baba was behind sending terror threats to several local journalists, after which five of them resigned. Baba is said to have compiled a list of journalists who claimed to be informers of the security forces. The Jammu and Kashmir Police has registered a case under the Prevention of Unlawful Activities Act.

The security services have discovered that Baba is visiting Pakistan from Turkey and is propagating a false narrative to frame youths for terrorism under the banner of The Resistance Front (TRF), IANS reported. The agency has identified six people who are in contact with him, including four journalists.

He is a resident of Srinagar who moved to Nowgam. He now lives in Turkey. In the 1990s he was with the terrorist organization Hezbollah. According to a reported file prepared by the intelligence services, he was associated with Masrat Alam. He is also notorious for using coercive tactics to force journalists and media outlets to spread pro-Pakistani and pro-terrorism stories.

Baba was a journalist with a Kashmir-based organisation. He remained in Kot Bhalwal Jail of Jammu.

Mukhtar Baba was posted to Turkey sometime in 2018 by Jodha Carin Fischer, a US citizen of German descent who operated in Jammu and Kashmir as a deep-penetrating ISI operative for nearly eight years, the agency reported, adding that she was later deported.

On November 12, the police drew up a report against several people for sending threatening letters to several senior journalists. Among the editors who resigned for fear of the terrorist.

In recent months, the terrorists have attacked civilian targets, including businessmen, teachers and migrant workers.

On Sunday, two non-residents were shot in Anantnag. It was the second such attack in 10 days.