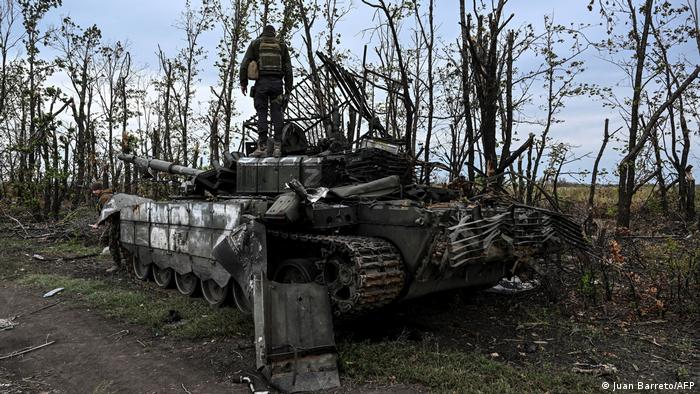 The numbers still amaze people in Ukraine — since September 6, the Ukrainian military has liberated more than 6,000 square kilometers (2,378 square miles) and more than 300 towns with a total population of about 150,000 people in the Kharkiv region, according to the Ukrainian deputy. Defense Minister Hanna Maliar.

Most of the area to the north and east of Kharkiv Oblast has reportedly been recaptured, an area Russia quickly occupied and held onto at the start of the invasion on February 24, 2022.

For Ukraine, this offensive is the second major success since the end of March, when the Russian offensive on Kiev failed and Moscow withdrew its troops north of the capital.

Moscow initially remained silent for days before describing the hasty retreat as a “regrouping.” However, the retreat is not yet a relief for Kharkiv, Ukraine’s second largest city. Close to the border with Russia, the city is shelled almost daily. But for the areas further east, the end of the occupation is of strategic importance.

Home to about 50,000 people before the Russian invasion, Izyum is located in the southeast of the Kharkov region on the strategically important highway M-03 (E-40). It is considered the most important city that Ukraine was able to recapture. The road connects Kharkov with the city of Sloviansk in the adjacent Donetsk region. Izyum to Sloviansk is only 50 kilometers (32 miles), making it the gateway to the Donbas Basin.

Since the outbreak of the war in the Donbas in 2014, this road has become one of the central transport arteries of Ukraine. Troops in the Ukrainian-controlled part of Donbas are supplied from Kharkiv along this route. Russia is trying to encircle Ukrainian troops near Sloviansk, but so far without success. There has been heavy fighting in the area all summer. The recapture of Izyum relieves Ukrainian forces in Donbas and the offensive can continue further east.

A Ukrainian soldier on an abandoned Russian tank in Izyum

However, Izyum is more than an important transport hub. It is home to an arms factory owned by the state-owned Ukroboronprom, the only manufacturer of glass optics in Ukraine. Most of the night vision equipment for the Ukrainian army is produced there, including for battle tanks and infantry fighting vehicles. The weapons factory Izyum also produces parts of the laser control system for the Ukrainian Stuhna and Corsar anti-tank missiles, both used in the war.

Kupiansk, railway junction on the border with Russia

The city of Kupiansk is the second most important railway junction in the Kharkiv region. The city is located in the north, just 40 kilometers from the border with Russia. Russia, which has a new army base near the town of Valuyki, close to the Ukrainian border, used Kupyansk to transport supplies to the front at Izyum.

Kupiansk is located on the Oskol River. Russian forces retreated to the east bank in response to the Ukrainian offensive. Before the invasion, about 60,000 people lived in the city. During the occupation, it was controlled by a civil-military administration controlled by Moscow, which forced the Ukrainian offensive to move first to Vovchansk near the border and then to Belgorod in Russia. The “administration” apparently had planned a “referendum” for annexation to Russia in the coming months, similar to those in other occupied territories – plans now disrupted.

Balakliia was one of the first liberated cities in the Kharkiv region. With about 27,000 inhabitants before the war, it is smaller than Izyum and Kupyansk. However, it is near the strategically important highway M-03 on the route from Kharkov to Izyum.

In 2017, an ammunition depot for artillery shells exploded in Balakliia, making headlines in Ukraine and abroad. The authorities in Kiev suspected sabotage. According to some stories, the city once housed Ukraine’s largest ammunition depot, a Soviet legacy.

Shebelinka, Ukraine’s largest gas field, is also located in the area. It is important for Ukraine’s gas supply, but its proximity to the frontline has put gas production at risk. Nearly half of Ukraine’s gas is produced in the Kharkiv area.

Can Ukraine keep the recaptured territories?

Ukraine is trying to push further east and liberate other areas, but the pace has slowed considerably. The key question in the coming weeks is whether Ukraine can keep the areas already liberated. Observers do not rule out the possibility that Russia will regroup and attack again in the north. Chechen leader Ramzan Kadyrov, whose troops are considered notorious in the Ukraine war, announced that lost territory under Moscow’s control would be reclaimed.

Ukraine is currently trying to advance in the southern region of Kherson, where several small towns have been recaptured. Russia apparently considers Kherson far more important than Kharkov because of its proximity to the annexed Crimea — and has repeatedly sent reinforcements.

The Bharat Express News - September 25, 2022 0
How far will you go to get your treasure? Netflix's Season Three Trailer outer benches asks that same question as the action picks up...