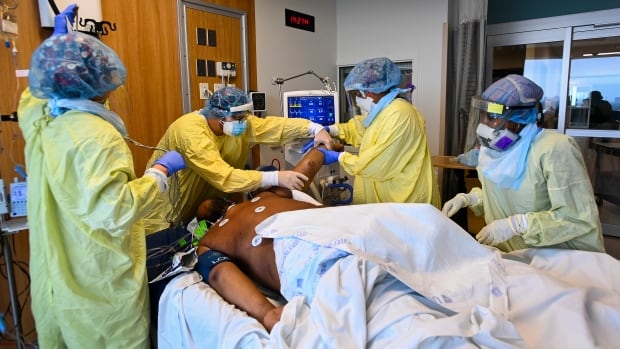 The number of COVID-19 patients in hospital and intensive care has increased in many provinces in recent times, but comparing those numbers isn’t exactly a head-to-head comparison. Not all provinces count patients the same.

The main difference is whether the official figures include patients who stay in hospital or in intensive care units (ICUs) but are no longer considered infectious.

In Alberta, these patients are included in the data the province publishes daily.

“We report them as long as they are hospitalized with COVID-19 as a contributing cause, whether they are infectious or not,” said Alberta Health spokesperson Tom McMillan.

Health officials in Quebec and Saskatchewan say they count patients the same way.

But British Columbia does it differently.

“BC ICU patients with COVID-19 who are no longer contagious are not included in the ICU totals that are reported daily,” said Justine Ma of the BC Provincial Health Services Authority. Briton in an email.

It is not entirely clear whether the same applies to patients in British Columbia who are hospitalized outside of ICUs. Asked for clarification on this, Ma did not respond.

Manitoba, for its part, reports both figures.

In Wednesday’s daily update, the province said 61 patients were hospitalized with active COVID-19, along with 79 other patients who are no longer contagious but continue to require care, for a total of 140 hospitalizations.

This included 12 ICU patients who remain contagious and 18 who are no longer contagious, for a total of 30.

Ontario recently started making this distinction for intensive care patients, but not for the total number of inpatients.

As of Wednesday, data showed a total of 504 COVID-19 patients in Ontario’s ICUs, of which 476 still tested positive and considered infectious.

The Ontario government had be the object of criticism recently for reporting the lowest number only, while Critical Care Services Ontario, a separate government agency, reported the highest number.

ALSO READ  As the supply of N95 respirators grows, so too will Health Canada update its mask guidelines | TBEN News

Open to the Ontario public COVID-19 Data Website now displays both numbers: the higher number in the daily “case overview” and the lower numbers in a graph of past hospitalization data.

It’s unclear how New Brunswick reports its data, which showed 18 people in the hospital on Wednesday, including 12 in intensive care. TBEN News has requested clarification from the provincial health ministry, but has yet to receive a response.

In the rest of Atlantic Canada, hospitalizations for COVID-19 remain rare.

Nova Scotia reported one patient in hospital (outside the intensive care unit) on Wednesday, while Prince Edward Island and Newfoundland and Labrador each reported zero hospitalized patient.