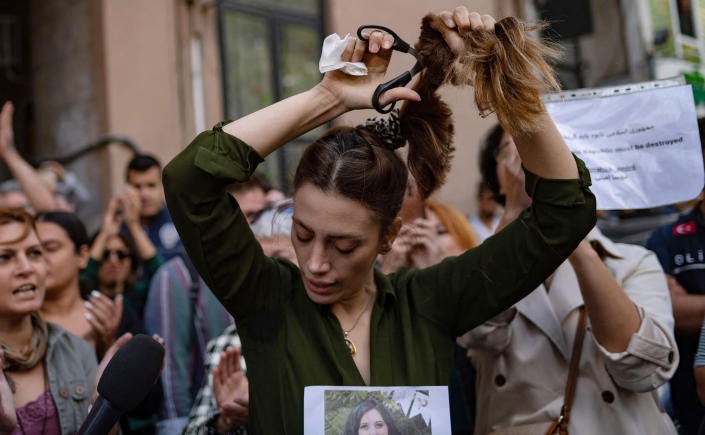 The death of a young woman while detained by Iran’s vice squad has sparked protests across the country — and around the world — as women burn their headscarves and trim their ponytails in protest of the government’s restrictions on social freedoms.

Women have been at the forefront of protests that have erupted in dozens of cities across Iran for seven days in a row. Images and videos shared on social media showed women defying the country’s strict dress code, which is believed to have led to the arrest of 22-year-old Mahsa Amini.

Amini was approached by vice squad outside a subway station while vacationing in Tehran on Sept. 13 and arrested for allegedly violating the country’s strictly enforced dress code, NBC News reported.

Police said Amini became ill, had a heart attack and slipped into a coma, and was pronounced dead on September 16. Authorities denied assaulting Amini and said an investigation into her death is underway, but her family denied she had any previous health problems.

In a video of a protest over the past few days, a woman spins around throwing a headscarf into a bonfire before others begin tossing their headscarves into the flames. Another video shows a woman cutting her hair in front of a large crowd cheering her on.

NBC News reports that many protesters have chanted against the Iranian government and for women’s rights, in addition to public acts of violation of the country’s dress code. Since 1979, women in Iran have been required to wear a headscarf and loose clothing in public.

In response to the protests, police fired grenades and water cannons at the protesters and beat them with batons. At least 26 people have been killed in the protests in the country, according to Iranian state television.

TODAY could not independently verify the number of deaths in the protests.

According to reports in the state media and the Kurdistan-based Hengaw human rights organization, internet access has been restricted in several cities across Iran. Iran also has limited access to Instagram, one of the few remaining social media platforms in the country, according to internet shutdown watchdog NetBlocks.

Iranian President Ebrahim Raisi has ordered an investigation into Amini’s death and has expressed his condolences to Amini’s family in a phone call, according to his official website.

“Your daughter is like my own daughter, and I feel like this incident happened to one of my loved ones,” Raisi said. “Please accept my condolences.”