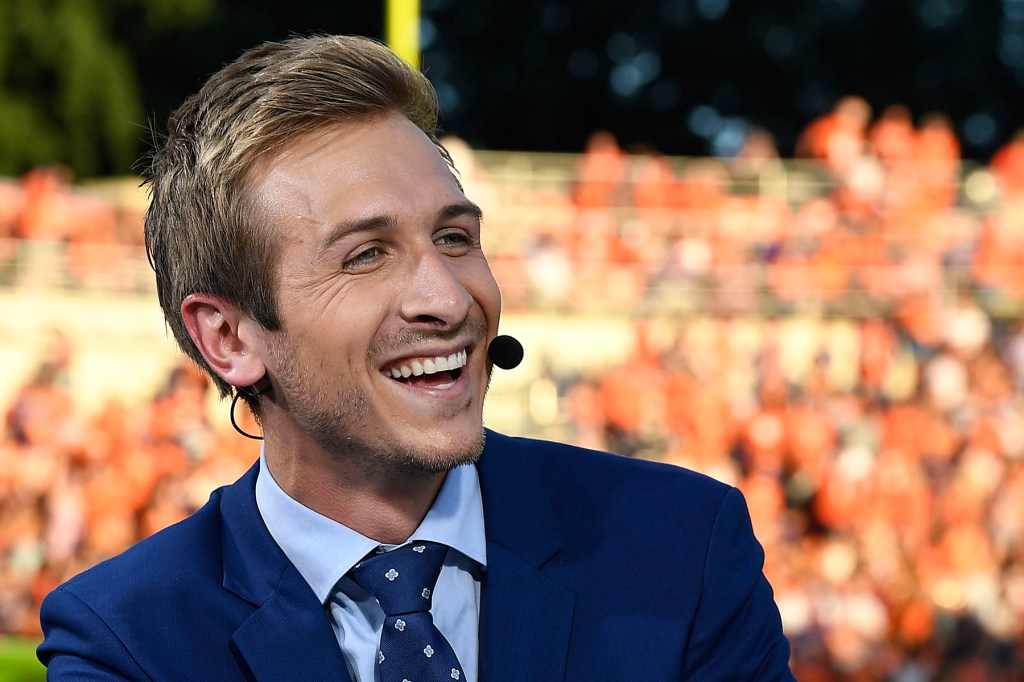 Get plugged in on the latest in sports media

We spent the entire weekend watching football. It’s a job, but somebody has to do it. 😉

Here you go, everything of note we saw and heard.

Jac Collinsworth’s last name and NBC family lineage surely didn’t hurt him in getting the Notre Dame play-by-play job, but he struggled Saturday as much as the Fighting Irish, who were upset by Marshall.

Let’s address it all.

1) This is a big-time role that NBC’s president of production, Sam Flood, entrusted to a 27-year-old in Collinsworth.

2) Last year, NBC had Mike Tirico, who has since replaced Al Michaels on “Sunday Night Football” as its lead Notre Dame play-by-player, and one of the greatest quarterbacks of all-time, Drew Brees, as its analyst. Collinsworth’s partner is former Cowboys coach, Jason Garrett. Tirico is now teaming with Jac’s father, Cris, on NBC’s SNF.

3) When you are 27 years old, haven’t done a ton of play-by-play and have a big last name, there is going to be scrutiny and even charges of nepotism. Notre Dame on NBC is not on-the-job training. It is the big leagues.

4) Collinsworth didn’t sound like a national TV play-by-player. His few reps showed in his lack of command. He had a habit of saying, “Mmm, hmm” at times and felt a step slow on calls.

In the big moments, he didn’t exclaim and resonate. He didn’t sound like someone who was fully in charge, which makes sense because he lacks play-by-play experience.

5) There are plenty of great sons of announcers who have excelled. From Joe Buck to Kenny Albert, there are major advantages to being the son of someone who has done it — and not because of access to decision-makers.

6) Buck and Albert were able to see how their fathers did the job. They were around it. That gave them a head start, allowing them to be successful at a young age. When given the opportunity, they were ready and commanded the booth. This is vital for any young announcer, but even more so if you’re open to nepotism charges.

7) Jac Collinsworth is fine as a reporter on NBC’s “Sunday Night Football.” He may not be Bob Costas, but he doesn’t feel out of place.

8) On Saturday, Collinsworth failed to tell the stories of Marshall in the upset and connect with the right words and tone on the game’s biggest plays. The broadcast felt uneven.

9) On the plus side, Garrett showed potential, giving reasons for why plays happened. Social media, however, didn’t seem to like him — and he was a bit too positive at times — but he identified what was going on. Though his personality is a bit of a flat line, his voice cut through with the crowd. Garrett will probably end up being better on games than in studio, where he is part of “Football Night in America.”

• Meanwhile, Cris Collinsworth’s voice sounded as if he were sick on Sunday night’s Cowboys-Bucs game. Collinsworth said he felt great. His partner, Tirico, said that it was just the fact they had games Thursday and Sunday and took red-eyes. “My man’s playing hurt!” Tirico said.

• At the end of the wild Steelers’ overtime win over the Bengals, TBEN’s Ian Eagle put on a sportscasting clinic, foreshadowing what turned out to be the most important late storyline of the crazy back-and-forth between the two teams: The Bengals had a backup snapper in on field goals. Shortly after Eagle put a spotlight on the matter, the Steelers’ Minkah Fitzpatrick blocked a potential go-ahead extra point at the end of regulation. Then, in overtime, Eagle and partner Charles Davis highlighted the snapper issue before Bengals kicker Evan McPherson badly hooked a gimme game-winning field goal. Replays clearly showed that a high snap was the problem.

As for Davis, he needs to give more opinions on what is going on. He also should’ve known the ‘Holy Roller’ fumble rule that prevented the Bengals from having a long field-goal attempt after Joe Burrow‘s fumble with less than two minutes remaining in overtime. Though it was recovered by a Bengals teammate, the ball couldn’t be advanced by rule because there were less than two minutes to go. Eagle could have said what the rule was but didn’t. Officials’ analyst Gene Steratore did a nice job of clearing up the confusion. And then late in regulation on a controversial Steelers penalty at the goal line, Davis was silent when the moment called for him to offer his thoughts on whether the flag was right or not.

• During the Chiefs’ blowout of the Cardinals, Tony Romo had a good reference to Daniel LaRusso when Chiefs kicker Harrison Butker came back to nail a long field goal on a bad leg. Meanwhile, Jim Nantz struggled in the first half, specifically calling Chiefs safety Justin Reid, Eric, on more than one occasion. At times, Reid was kicking for the Chiefs after Butker was hurt.

• It was a surprise when Eli Manning showed up on set for ESPN’s “Sunday NFL Countdown.” Manning’s segment ended with him pitching a million-dollar contest for a bread roll company. It felt like a Radio Row spot during the Super Bowl. Countdown isn’t some holy place, but the promo felt a little beneath it.

• Speaking of ESPN, when was the last time it began a season of “Monday Night Football” with the sure things and star power it has now? For Seattle-Denver, it will have the Joe Buck and Troy Aikman team making its debut on the main channel, while the Manningcast will be on ESPN2.

• The NFL App had a lot of reported trouble. Personally, RedZone didn’t work until the second quarter of the first games. From my Twitter surveying, I was not alone. The NFL was aware of the issues, too.

• TBEN has a new studio that will probably become familiar over time. Something it will have to figure out is how to maintain a connection to the audience within a mammoth studio, which can sometimes make the on-air folks seem small. That’s a problem ESPN ran into years ago when it debuted its new, huge SportsCenter set. They are both beautiful, but it has to be figured out how not to diminish the presence of the host and analysts.

• From the “let’s try not to reinvent what doesn’t need to be reinvented” department, TBEN showed some halftime highlights from behind the backs of its panelists, Terry Bradshaw, Michael Strahan, Howie Long, Jimmy Johnson and Curt Menefee — which is an unneeded vantage point. It just made the video that we wanted to see smaller. Can’t imagine what the logic would be behind thinking this is somehow better than the normal full-screen view with the analysts just describing the action. A new studio is nice, but viewers don’t care that much.

• Since the New York area had the Giants-Titans game, I didn’t see enough of Kevin Burkhardt and Greg Olsen on Packers-Vikings to give any type of verdict. I saw some through RedZone, but don’t want to chime in without a full viewing.

Eagle and Kevin Harlan each entered their 25th season broadcasting the NFL on TBEN. Can you name who their partners were in their first season (answer at the end of newsletter)?

• ESPN hired Larry Fitzgerald Jr. for five-to-seven “Monday Night Football” pregame appearances on Countdown. Fitzgerald Jr. has a lot of the traits you’d want in terms of being good on paper; especially the fact he is a future Hall of Famer. But, in practice, he has not been that outspoken. Will he say anything of interest? What is often overlooked for those ex-players and coaches who become quality analysts is the precision with which they are utilized. A good example is Urban Meyer. Forget, for a moment, the Jacksonville disaster. When Meyer was on ESPN years ago compared to TBEN, Meyer was two different analysts. Why? TBEN mostly had him talk about coaching, which made it so he could talk his language, not do TV. If I’m ESPN, I want Fitzgerald to give a masterclass on receiving every week, not just weigh in on the issues of the day around a desk.

• TBEN’s “Big Noon Kickoff” has made an impact and is now on the road every week. While TBEN Sports did as much as possible to play down the re-hiring of Meyer, he is again proving to be very good on set. He did a segment explaining how Texas must essentially give up on some plays to block the superior athletes on the Alabama defensive line. Then TBEN gave examples from past games, showing how, in Meyer’s words, you can “neutralize” a superior opponent on set plays with this approach. It was smart, inside-the-game stuff that Meyer explains very well. Exquisite TV.

• Pat McAfee and ESPN have been talking for months about McAfee joining “College GameDay” full-time, and then the deal came together very quickly. McAfee is tight with Kirk Herbstreit, who was strongly in favor of the move to bring him back to the show. To start the program Saturday, ESPN had McAfee in the middle of its panel. He brings an energy to the show and has a way of expressing his thoughts that is often entertaining, like when he described Iowa punter Tory Taylor as an alien. GameDay is headed to Boone, North Carolina, home of Appalachian State next Saturday. The celebratory atmosphere (following Appalachian State’s upset of No. 6 Texas A&M on Saturday) the crew is likely to encounter should let McAfree shine.

• In its “Thursday Night Football” opener pregame, NBC went to “Today” show host Hoda Kotb for a segment on Queen Elizabeth’s death and then football talk. The transitions both prior to kickoff and another spot at halftime were really awkward. One moment, Kotb was mourning the death of the Queen, and the next there were fans with pom-poms rooting on the NFL’s return. We get that there are time constraints, but the best — probably only — TV practice is talking about someone’s death and then fading to black for a break. Basically, all other transitions feel forced and uncomfortable for the viewer.

• On Thursday at 7 p.m., ESPN will air “The Fate of a Sport,” a documentary on lacrosse standout Paul Rabil, who is now the head of the Premier Lacrosse League. Among other things, it documents Rabil’s negotiations with ESPN and NBC for the rights to the league’s games. ESPN ended up winning the rights to PLL from NBC.

Ian Eagle’s first partner was Mark May, while Kevin Harlan’s was Sam Wyche.

This week, I will have a big feature on Amazon Prime Video making history this Thursday with its stream of the Chiefs and Chargers. John Ourand and I will have Al Michaels and Kirk Herbstreit on our pod. Subscribe here.