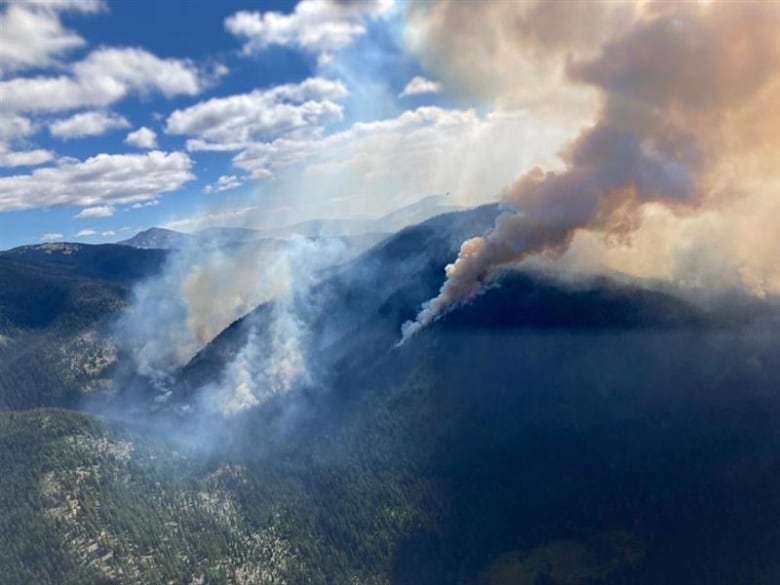 While smoky skies fill much of the lower British Columbia mainland and Fraser Valley, 191 wildfires continue to burn in the province, leading to hundreds of evacuation warnings and evacuation orders in the Peace region.

An air quality advisory has been issued for Metro Vancouver and the Fraser Valley due to high concentrations of particulate matter from wildfire smoke in BC and the United States.

Evacuation Order for Hudson’s Hope, BC

An evacuation order was issued Saturday for the community of Hudson’s Hope, located southwest of Fort St. John in the Peace region.

The Battleship Mountain wildfire, which has scorched 24,000 acres, is burning out of control about 30 miles west of the community of about 850 people.

“You must vacate the area immediately,” said Mayor Dave Heiberg.

The Peace River Regional District has also issued evacuation orders for properties outside Hudson’s Hope, in electoral areas B and E.

A reception center has been opened in Fort. St John and, on social media, residents in nearby communities have provided support, shelter and space to stock livestock.

More than 65 firefighters, 12 helicopters and 16 heavy equipment are fighting the fire, which was first discovered on August 30.

The small community of Eastgate, near Manning Provincial Park in southern BC, is still on evacuation alert because of the Heather Lake fire, which burns about three miles south of Manning Park resort.

“An evacuation warning has been issued to prepare you to evacuate your premises or property if necessary,” said Sean Vaisler, director of emergency operations for the Okanagan-Similkameen Regional District.

The fire has now grown to 8,663 acres and is being fought by both Canadian and US wildfire agencies as the fire has spread beyond the international border.

Residents are required to collect all essential items, including medicines and important documents, fill their vehicles’ gas tanks, arrange possible accommodation and implement a plan to move livestock safely, the district said in a press release.

Residents can reduce the risk of fire around their home by moving firewood out of their home; clearing debris from their roofs; keep grass length under 10 centimeters; removing combustible appliances, such as barbecues; and clearing leaves from under decks, balconies and patios, the release said.

Smoke from wildfires has turned the skies gray in Metro Vancouver, the Fraser Valley and the Greater Victoria.

A burning fire at a wood recycling facility in Vancouver is also contributing to poor air quality in multiple municipalities, including Burnaby, Richmond, New Westminster, Surrey and Coquitlam, says the organization Metro Vancouver.

It has issued an air quality advisory that warns against high concentrations of particulate matter. It says poor air quality is expected to continue through the weekend.

Metro Vancouver says particulate matter refers to solid or liquid droplets that can easily penetrate indoors because of their small size.

It advises people to delay or reduce outdoor physical activity, especially if breathing feels uncomfortable, including for children and pregnant women, and for those with underlying conditions such as lung disease, asthma and diabetes.

Metro Vancouver says air conditioning can provide some relief from pollution, and public buildings such as libraries can serve as refuges in some communities.

Ottawa woman sues frontman Hedley for $2.8 million after he was found guilty of sexually assaulting her | TBEN News