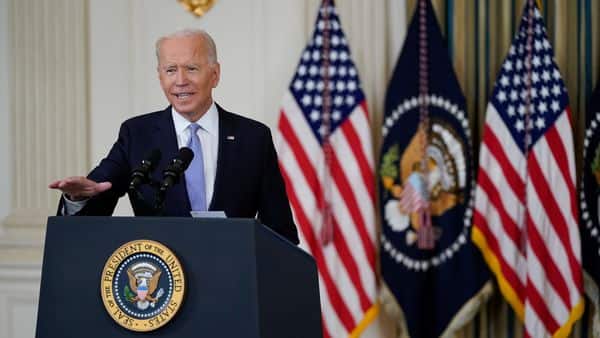 There is more bad news for President Joe Biden when it comes to voters’ sentiment regarding his performance in power. But there are also reasons to believe that some voters may not hold him fully accountable for the results of his governance.

This column will offer the usual caveat that polls should not be treated as precise measures of public opinion. But there is a continuing trend in a variety of surveys showing an erosion of support for the president.

Now Megan Brenan reports that the latest Gallup poll shows Mr. Biden’s approval rating drops to “43%, the lowest in his presidency.” For the first time, a majority, 53%, now disapproves of Biden’s performance. ”She adds:

Independents have shown the greatest variation in their opinions on how Biden is doing. Biden’s current 37% approval rating among independents is its lowest to date and 24 points below his personal high of 61%. Two-thirds of Biden’s fall among Independents since taking office has occurred in the past three months.

The Pew Research Center reports the results of its own survey, which shows an equally sharp drop in support:

With his administration facing multiple challenges at home and abroad, President Joe Biden’s job approval rating has fallen sharply in the past two months. Less than half of American adults (44%) now approve of the way Biden handles his job as president, while 53% disapprove. This marks a reversal in Biden’s job ratings since July, when a majority of 55% approved of his job performance and 43% disapproved.

Majorities in the Pew Inquiry are not expressing confidence in Mr Biden on most issues. But there’s also bad news for the White House when the questions go beyond specific political issues. Pew explains:

Biden continues to attract less confidence in unifying the country than in dealing with specific issues; only about a third (34%) are confident it can bring the country closer, a drop of 14 percentage points from March.

Ratings of Biden’s personal traits have also become less positive. While the majority say they stand up for what they believe in (60%) and care about the needs of ordinary people (54%), larger shares described Biden in those terms six months ago (66% and 62%, respectively).

And then there’s that other personal trait, which may cause some voters to refrain from criticizing Mr. Biden even when his policies fail to generate positive results. Pew Reports:

Yes, according to the Pew survey, we are ruled by a man 56% of Americans do not describe as “mentally sharp.” This includes 35% who think the term describes it “not well at all” and 21% who say “not too well”.

Speaking of political failures, there is the continuing disaster resulting from the way Mr. Biden left Afghanistan. Reporting by Sawsan Morrar and Jason Pohl for the Sacramento Bee:

School districts in the Sacramento area are still identifying more students stranded in Afghanistan under the Taliban, weeks after the United States completed its withdrawal from the country.

Sacramento City Unified officials said Monday that eight students are stranded in Afghanistan. Initially, they had identified only one family interviewed by The Sacramento Bee. Attendance records as the school year progressed showed more students were missing, and staff traced their whereabouts around the country.

“It really needs to be a coordinated government effort because these families are at risk,” Kent Kern, director of San Juan Unified, said Monday in an interview with Capital Public Radio.

That’s for sure. Kathy Gannon reports for the The Bharat Express News in Kabul:

One of the founders of the Taliban and most responsible for their harsh interpretation of Islamic law during their last reign over Afghanistan has said the outright movement will once again carry out executions and amputations of hands, but maybe not in public.

Whether the abandonment of our people and our friends in Afghanistan is attributed to the president’s character or his cognition, voters may decide that is unacceptable.

James Freeman is the co-author of “The Cost: Trump, China and American Revival. “