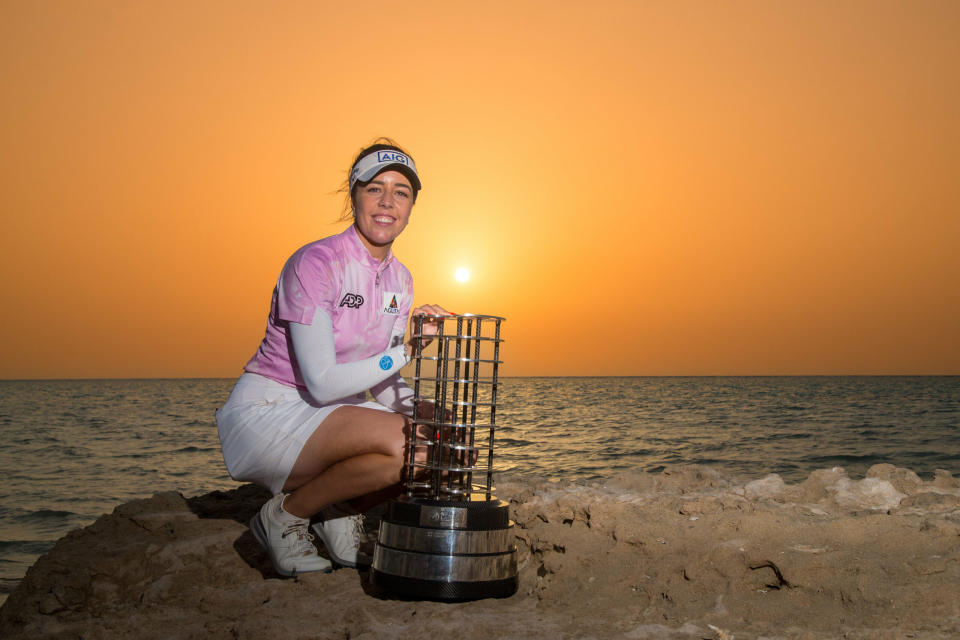 Saudi Arabia’s Public Investment Fund showed that it would spare no effort to ensure that the controversial LIV Golf Series gained a foothold.

Now the focus is shifting to a possible women’s LIV Golf series and as a country that continues to discriminate against women will save some of that life-changing money for them.

CEO Greg Norman was asked by the Palm Beach Post in July if LIV Golf would venture into the women’s side.

“One hundred percent. Put the mic on it,” he said. “We’ve discussed it internally, the opportunity is there.”

That comment caught the attention of LPGA golfers. Some send warning signals to the LPGA.

“I think a lot of women would go because it’s a big difference,” said Spaniard Carlota Ciganda this week from the CME Group Tour Championship at Tiburon Golf Club. “If they ask you to go to Saudi Arabia and they are going to pay you $5 million, what would you do? Would you stay here? Would you go get the money?

“I understand both points. I don’t think it’s right or wrong. You have some political ideas, but at the same time this is our job and if you get the chance elsewhere, why not take advantage of it and go.’

Madelene Sagstrom, a six-year LPGA veteran from Sweden, has noted the rivalry LIV has created with the PGA Tour and the friction between those who left the tour and those who have remained loyal.

Sagstrom isn’t sure the LPGA Tour can survive a similar conflict.

“I think the LPGA will have to do it differently than the PGA Tour,” Sagstrom said. “We’re a little bit more vulnerable I would say.”

Madelene Sagstrom of Sweden watches during the AIG Women’s Open at Muirfield on August 7, 2022 in Gullane, Scotland. (Photo by Octavio Passos/Getty Images)

Karrie Webb, the seven-time grand winner who lives in Boynton Beach, shared Golf week in June, she fears a LIV women’s competition could “ruin women’s golf.” Webb grew up idolizing Norman, a fellow Aussie, but has expressed disappointment with her “childhood hero”.

Following the Palm Beach Post report in July, LPGA commissioner Mollie Marcoux Samaan told the London Times that “she would strike up a conversation” with LIV if it meant promoting women’s golf. LPGA would do business with LIV Golf.

Marcoux Samaan declined to speculate further when asked this week whether LIV was entering the women’s golf business.

“As stewards of the game, we just really listen and learn,” she said. “We don’t know what the intentions are. We are really only focused on ourselves.”

The golfers’ focus was certainly on the LPGA and more specifically on the $2 million check for this week’s winner. But the disparity in money on the LPGA Tour compared to the PGA Tour and LIV is what draws the attention of most of the women on the tour.

LIV distributed $255 million in prize money and bonuses across eight events this year. That number will rise to $405 million for 14 events next year. The PGA Tour prize pool for a 2022-2023 47-event season will be increased to $428.6 million.

The LPGA approached $90 million for 34 tournaments this season. Included is the $7 million purse for this week’s Tour Championship.

ALSO READ  Tiger Woods complains about foot condition that forced him out of Hero World Challenge: 'I just made it worse'

England’s Charley Hull, ranked number 15 in the world, believes many of her colleagues would seriously consider a LIV invite if it came with a life-changing salary.

“I think they might,” she said. “I think it would be really hard, but if the LIV tour came along and they offered you something, you’d be crazy not to look and think about it.”

LIV Golf, which will be renamed the LIV Golf League in 2023, has drawn widespread criticism for Saudi Arabia’s repeated human rights violations. Not only are women oppressed, women’s rights activists and political prisoners have reportedly been sexually assaulted, tortured and killed in Saudi Arabian detention cells.

But unlike the men’s golf, women’s golf already has ties to Saudi Arabia. Aramco, the Saudi Arabian petroleum and natural gas company, is partnering with the Ladies European Tour. The Saudi Arabia-backed Aramco Team Series takes place on three continents. A team series ties in with LIV Golf’s team concept, which has become the most popular part of the men’s series.

The Aramco Saudi Ladies International presented by PIF is February 16-19 at Royal Greens Golf and Country Club in King Abdullah Economic City and has a $5 million scholarship, up from $1 million in 2022.

Several LPGA golfers are sponsored by Aramco, some promoting Golf Saudi on shirts and caps. Georgia Hall, ranked 31st in the world, was the winner of last year’s Aramco Saudi Ladies International. She said this week that “a lot of factors would matter” if LIV started a women’s league and she was pursued.

ALSO READ  Steven Alker and Padraig Harrington, 1-2 in the points race, are 1-2 in the standings at Charles Schwab Cup Championship

Lexi Thompson of the USA during the final round of the Aramco Series. (contributed photo)

“Investors coming in as they are, putting a lot of money into golf in general is a good thing for women,” she said. “It will certainly be interesting to see if there will be a LIV women’s tour.”

The final Aramco Team Series event for the 2022 season was at Trump Golf Links Ferry Point in New York and was won by Lexi Thompson. Thompson’s relationship with Donald Trump could be a factor if she had to make a decision.

Thompson, No. 7 in the world and a native of Delray Beach, is a longtime member of Trump International in West Palm Beach and golfed with Trump when he was president. Trump has joined LIV Golf and at least three LIV events will be held at his properties next year.

Thompson and current world No. 1 Nelly Korda of Sarasota were asked about a possible future association with LIV.

“We or the tour have not been offered any opportunities,” said Thompson. “I know Mollie said she’d have talks, but that’s out of our control. We just do what we can on our tour.

Korda won the individual title at the Aramco Team Series event in Sotogrande in Spain in August.

Now all eyes and ears will be on what Norman and LIV Golf have in store for the women.

Claire Foy nails a smart look in pinstripe trousers and a...