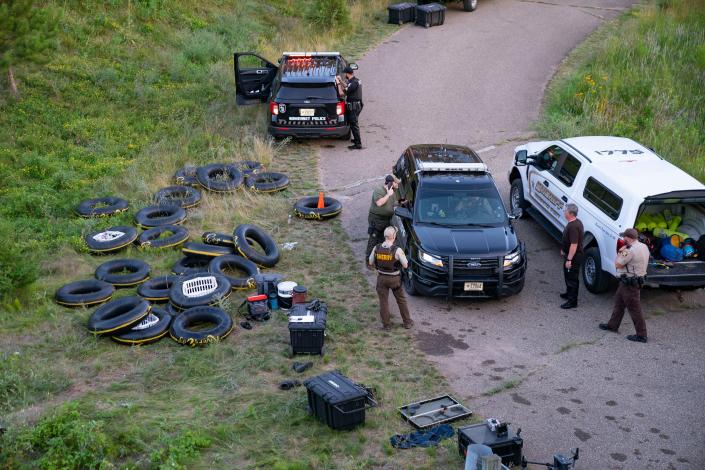 A 17-year-old Minnesota boy was killed and four others critically injured in a stab attack while tubing on the Apple River in Somerset, Wisconsin, according to the St. Croix County Sheriff.

Sheriff Scott Knudson said the suspect, a 52-year-old man from Minnesota, was arrested and taken to a St. Croix County Jail.

Somerset, a village of approximately 2,600 residents, is located along the Wisconsin-Minnesota border and about 30 miles northeast of St. Paul. The Apple River runs through town and is a popular tubing destination in the summer.

The stabbing occurred on a section of the river that was not easily accessible, Knudson said at a news conference.

“It took some time to get upstream,” he said.

When authorities arrived, they found five victims with stab wounds, Knudson said. The suspect had fled.

Using a photo of the man a witness had taken as a reference, the sheriff’s officers searched an hour and a half before a witness saw the man and officers arrested him.

They were still looking for the knife on Saturday night.

Knudson said he didn’t know what led to the stabbing, but said two groups of people were tubing. The suspect was tubing with a group of six to eight people.

There were as many as 20 people between the two groups, Knudson said. Investigators began questioning them as witnesses Saturday evening.

He would not say whether the suspect knew the victims before the stabbing.

“I don’t know what to think,” he said. “It’s best for me not to speculate about what was the tipping point today.”

The four injured victims were taken to Regions Hospital in St. Paul, including two who were airlifted for treatment. Knudson said all four of them — one woman and three men — are in their twenties.

The sheriff did not release the names of the victims Saturday night.

He described the attack as “chaotic” and “scary”.

“I’m sure anyone who went through this will never forget it.” he said.

More: How, where and when to vote for the August primary in Wisconsin and who’s on the ballot?