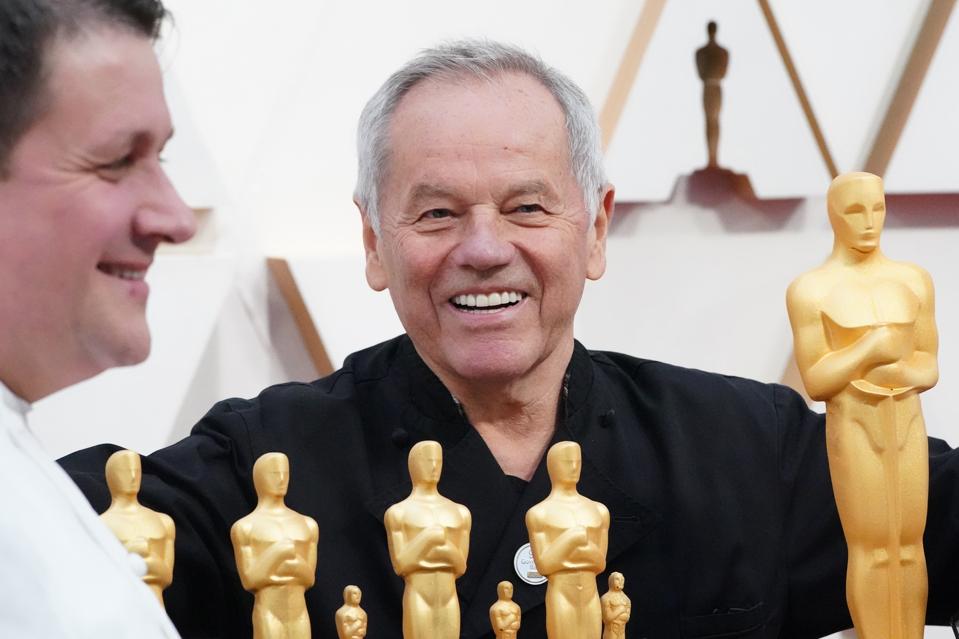 The world’s most recognizable chef is in a new series that takes viewers behind the scenes of the smash-hit juggernaut Wolfgang Puck Catering.

Still, the company’s namesake is more of a supporting character, leaving its seasoned crew in the spotlight. And that’s exactly how he wanted the event to go: “I agreed to do the show if we could tell the truth. I’m not always around in the kitchen, cooking, going to parties, but I trust my team 100% to represent me by doing their best.

Here’s what we learned about the show when we spoke with Wolfgang Puck, a conversation that also covered his favorite new take on a classic cocktail, fond memories of growing up in Austria, and the advice he gave. to President Donald Trump at the onset of the pandemic.

It’s hard for moviegoers and foodies alike to imagine a time when Wolfgang Puck was not in the thick of Hollywood awards season, his team creating sumptuous dishes for glamorous movie stars. When he decided to try and prepare for the Oscars Governors’ Ball after the Oscars, Spago was the hottest place in Los Angeles. At that time, it was unheard of for a gourmet chef to embark on such an ambitious catering project.

“In the ’80s, Chasen’s hosted most of the events,” he said, recalling the iconic Beverly Hills edge restaurant that was open from 1936 to 1995. “Back then we were busy organizing extravagant dinners for (Hollywood mogul) Marvin Davis and he came up to me asking why we’re not having Governors Ball. I thought it might be interesting to cook for 1,600 people.

While trying out this prestigious project, Puck arrived to check on his then chef’s progress and found that he was cooking just one dish. “He told them that was what I wanted. I told him to get out of the kitchen and made the menu on the spot.

When he was offered the concert, he said he would take it “as long as you don’t tell me what to do.” I had no interest in making chicken breasts for 1,500.

Interestingly, the first episode of The Event involves a dramatic departure from the chicken and salmon main course originally slated for the Screen Actors Guild Awards last January. We don’t want to spoil the plot twist, so you should tune in to see how it all plays out.

The inaugural triumph at the Governors’ Ball at the Oscars in 1998 propelled Puck to a new chapter in his career, a path that involved partnering with Carl Schuster, who has been CEO of Wolfgang Puck Catering since its inception. The team turned a one-time event into a huge success with over $ 150 million in annual sales. This refined operation inspired the event.

The opening episode of the unscripted series centers around preparations for the Screen Actors Guild Awards, following the exhaustive efforts to achieve culinary perfection from start to finish. In the set-up scenes, we meet the team. Most have worked for the company for many years, including Vice President of Kitchen Eric Klein, as have Ramon Leon and Barbara Brass, Vice President of Restaurant Sales.

After browsing the menu – accompanied by plenty of drool-worthy close-ups of the intricate preparations – viewers watch time-lapse footage of the massive space going from a blank slate to something of beauty. This particular event is a double with the team changing gears to wow guests at the afterparty at another location nearby.

As the evening unfolds there are a few hiccups – again, no spoilers – but these stressful moments are barely noticed by the adoring audience. Well, except… remember Wolfgang Puck heading for the kitchen to make a special vegan pizza for Leonardo DiCaprio.

“You make the best team and you give them responsibility, you don’t micromanage them. It works, ”Puck ​​said.

One of the lessons he has shared with everyone he has worked with is the importance of learning from mistakes: “Everyone is wrong. I screwed up. But I don’t want excuses. I want to know that you have learned from your mistakes. “

Another essential lesson he shares during the show? Be sure and taste the food before serving it. “There is no reason for food to be over-seasoned or under-seasoned.”

At the end of the well-paced episode, the viewer could share their feelings of exhaustion and elation with the kitchen team. There are high fives and hugs all around.

“Some people think these events are happening like magic, but there’s so much planning,” Puck said. Intensive planning also involves attracting some of the industry’s most creative artists. Viewers are introduced to visionaries such as designer Billy Butchkavitz, who is described by the team as crazy in a good way.

When the credits roll, viewers will no doubt want to play the next one. The event is just the kind of delicious escape that is welcome these days.

Unfortunately, there are only four shows in the first season because COVID-19 has become a harsh reality. Hope there will be more to come. “I really think that in the fall, things will start to improve and that by 2022, we will be back to give the awards.”

The fourth episode begins with the same spirit of camaraderie, with the team taking on the full challenge of creating a pop-up Spago at the Indian Wells Masters tennis tournament in March. It’s one of Puck’s favorite events: “It combines my love of tennis with my passion for food,” he says on the show. It is a joint effort between the restaurant side of the business and the catering team.

After all the preparation in the kitchen and on the front of the house – calling on the talents of the stars of Wolfgang Puck restaurants across the country – the tournament is called off. A few days later, a global pandemic is declared.

Since then, business has dropped dramatically, although there have been some bright spots. “We just prepared food for 16,000 Kaiser Permanente employees. It was good to bring the team back to the kitchen.

He worries for the staff, waiters, bussers, cleaning crew, line cooks and the front-of-house crew who have suffered a huge economic blow during this protracted healthcare crisis. Early on, Puck reached out to Trump suggesting the president help people. It was in April. “He told me it was going to be over by Easter. Unfortunately, he took the wrong avenue, ”Puck ​​said.

Although he is exasperated by the slow pace of vaccine rollout and the ongoing challenges so many face in these uncertain times, Puck said he tries to stay positive and keep his staff motivated, even though he was a dinner for six. “I went to see Eric this week at the Hollywood Kitchen and he was so happy to cook.

Puck is particularly empathetic towards the small farmers who have been devastated by the loss of restaurant business. “I grew up on a farm. I remember my grandmother and my mother digging up potatoes, throwing them in the back of the truck and taking them to the market. It’s a difficult life. ”

These memories have always been a motivator in her mission to seek out the best ingredients and “don’t screw them up”. Whether it’s scallops from a long-standing source in Maine or ducks from a farmer in Pennsylvania.

Has he made any exciting discoveries lately?

“There is always something new. I love a good Negroni and we started making it with Mezcal, which gives them a nice smoky flavor, ”he says.

He also loved the stollen created during the holidays by pastry chef Garry Larduinat. “I’m not sure what he did, but it was even better than my mom’s.

Here is the trailer for the first season of the event: Inside Wolfgang Puck Catering

The Bharat Express News - January 22, 2021 0
“Laura had one of the best hits I have ever seen on a tennis court,” said Annabel Croft, another Briton who won the junior...

A year into the Covid crisis, scientists explain what we learned...