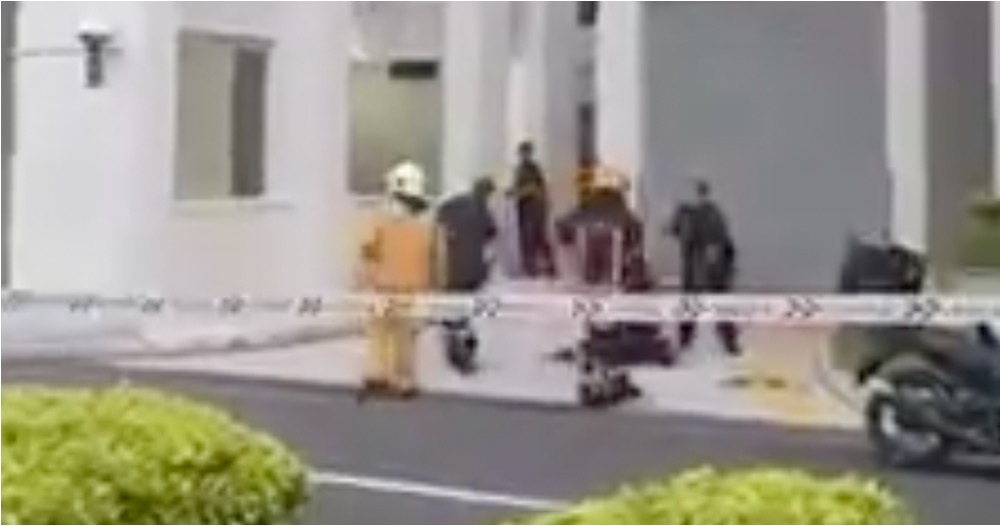 A woman was captured on video falling from an HDB platform on the fifth floor.

She was consciously transported to the hospital.

She was later detained under Section 7(1) of the Mental Health (Care and Treatment) Act of 2008.

A video submitted by a mothership reader captured the scenes.

The video showed the woman, wearing a dark top and jeans, standing on a ledge outside an HDB condo, with her back to the window.

Downstairs, police tape had cordoned off the area and a group of police officers gathered on the ground floor.

More officers marched through the perimeter, ostensibly to warn the public to stay behind.

After about a minute and a half into the video, the woman was seen holding onto the window grille with both hands behind her back, leaning forward.

She had no shoes on.

The woman fell shortly afterwards and landed in front of three police officers.

The camera then moved to the left, where Singapore Civil Defense Force (SCDF) personnel were seen on the scene.

At that time, the woman was picked up by a police officer. More SCDF personnel rushed to her side.

A 31-year-old woman was consciously taken to hospital and subsequently detained under Section 7(1) of the Mental Health (Care and Treatment) Act 2008.

Police added that they are aware that videos of the incident are circulating online and would urge the public not to distribute the videos or speculate about the matter.

SCDF told mothership that SCDF received a call for assistance at block 36 Eunos Crescent at 6:43 PM on September 20, 2022.

Upon arrival from SCDF, a person was seen on a ledge of a unit on the fifth floor. The person jumped prior to the arrival of the safety life air pack. SCDF took the person to Changi General Hospital.

If you or someone you know is in psychological distress, here are some hotlines you can call for help, advice, or just a sympathetic ear: