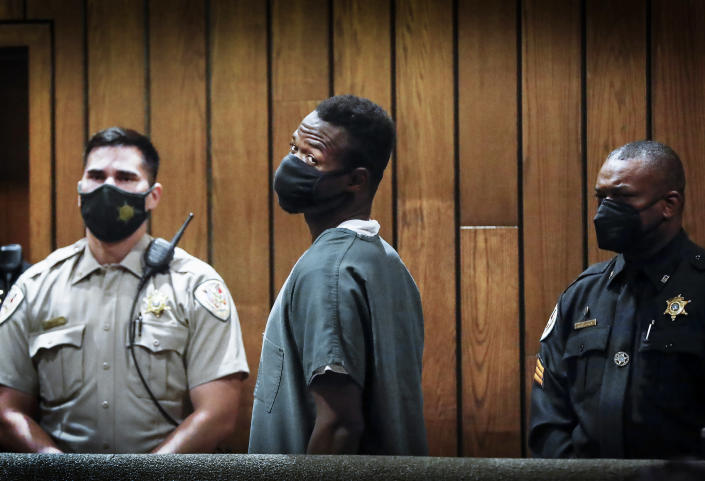 A woman who said she was raped last year by the man charged with the murder of Eliza Fletcher says police in Memphis, Tennessee, didn’t investigate her case properly and Fletcher would be alive if they had done.

In a lawsuit against the city of Memphis, Alicia Franklin said she met Cleotha Abston on a dating app last year and they talked for about a month before meeting in person on September 21, 2021 at the apartments of The Lakes at Ridgeway.

Franklin said in the suit that she and Abston, who she knew as “Cleo,” planned to have dinner, but that when she arrived, he pulled out a gun and forced her into an empty apartment.

Abston, who told Franklin he was a maintenance worker at the complex, blindfolded her with his T-shirt and threatened to kill her, according to the lawsuit filed Tuesday in the Shelby County Circuit Court.

According to the suit, Abston Franklin walked through the apartment and through a back door to his car, where he raped her in the back seat, she says.

Abston was charged this month with aggravated rape in the 2021 incident and pleaded not guilty.

Franklin said in the suit that she tried to stop Abston by telling him she was pregnant but that he seemed “unmoved.”

She said Abston then stole money from her and left her in the apartment waiting for him to drive away, according to the court document.

Franklin said she immediately sought medical attention and reported the attack to the Memphis Police Department. According to the lawsuit, she submitted to a forensic medical examination, during which an assault kit was collected, including TBEN evidence.

She took officers to the crime scene, the lawsuit says, but police “did not take physical evidence directly from the crime scene itself.” According to the lawsuit, Franklin gave investigators the name “Cleo,” his phone number, a description of his vehicle, and his social media accounts, including the dating app they met on.

Days after the attack, Franklin was asked to look at a series of photos of possible suspects. The lawsuit says police included an older photo of Abston in the lineup, but Franklin was unable to identify her attacker.

ALSO READ  “What I Appreciate Most Are You Fans”: Derek Jeter Returns to Yankee Stadium for Baseball Hall of Fame Celebration

For months, Franklin received no update on her case. According to the lawsuit, the police sent the assault kit to the Tennessee Bureau of Investigation, or TBI, but did not request expedited processing.

Police and the city declined to comment on Wednesday, citing the pending lawsuits.

The assault kit remained untouched until June, according to the lawsuit. The TBEN was not determined to match Abston’s until Sept. 5, three days after he was accused of pushing Fletcher into his SUV while she was jogging.

Abston, 38, was arrested the next day after police found the SUV in a parking lot near his residence, an affidavit says. He was indicted on several charges, including first degree murder and kidnapping.

Fletcher’s body was found on September 5 in a vacant duplex apartment. A cause and manner of death have not been released.

Franklin’s lawsuit says Abston “had and could have been arrested and charged for the aggravated rape of Alicia Franklin many months earlier, most likely in the year 2021…and the kidnapping and murder of Eliza Fletcher would not have occurred.”

Franklin’s case “was placed in the queue of unknown attacker kits because no request was made to accelerate TBI analysis and no suspicious information or TBEN standard was included in the submission,” the agency said in its statement. Franklin’s kit was pulled in June to be examined along with 19 other kits.

The agency said that while investigating Fletcher’s kidnapping, Memphis police informed it of a possible connection to Franklin’s attack.

Franklin told NBC affiliate WMC of Memphis that she didn’t want to be in the “spotlight” but felt that sharing her story “could help a lot of women come forward.”

A spokesman for Fletcher’s family was not immediately available for comment.