One woman deeply hurt by her ex-boyfriend and unable to move on wrote, “I can’t help but wonder why he still lives a good life after hurting so many girls?”

The woman shared in an anonymous post on popular confession page SGWhispers that she was already married and had two children, but couldn’t stop thinking about her boyfriend in Junior College (JC). She added that she thought he would be the one.

“The relationship ended almost 15 years ago when we were in JC. He cheated on me 3 times and in the end he decided to leave me even when I was completely ready to forgive him,” she wrote.

In her post, she added that she recently came across his social media profile and found out that “he is married to a beautiful lady and his wife recently gave birth to a baby girl. He has posted pictures of his adorable little one” .

She said she had mixed feelings seeing his photos.

“Why can guys like him get a beautiful wife and have such a nice family? He hurt me deeply and I find it so hard to forgive him. And now with social media, he kept showing up and even if I now have a great family,” the woman wrote.

Netizens responding to her post advised her to move on. They also told her that social media was one-sided and would only show the good sides. 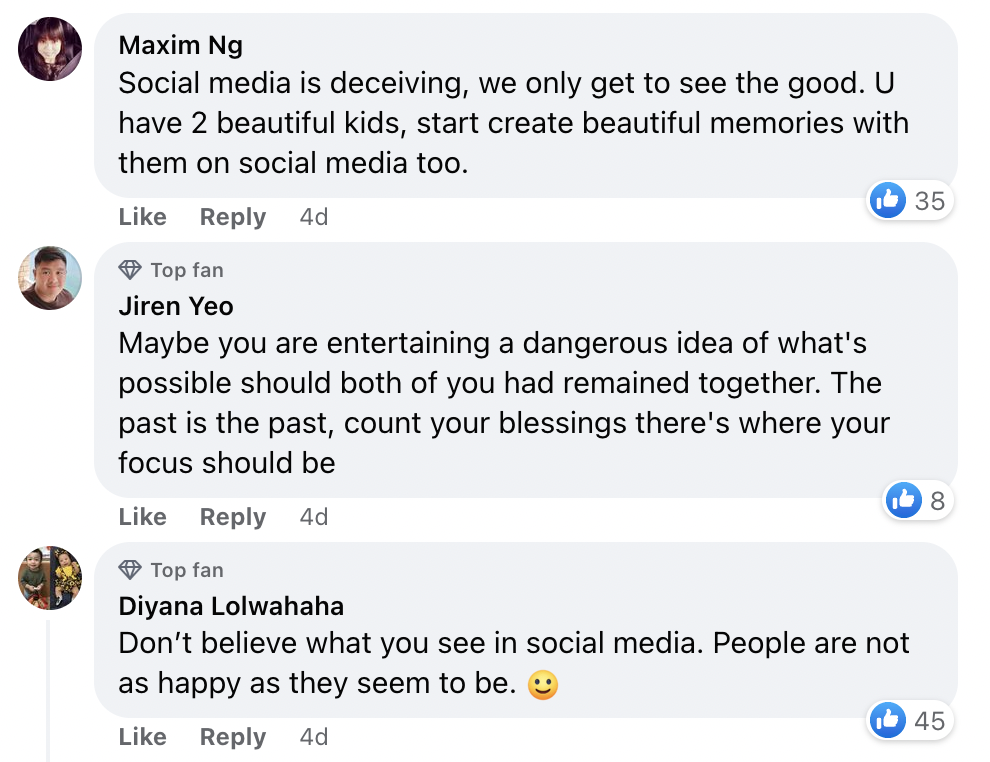 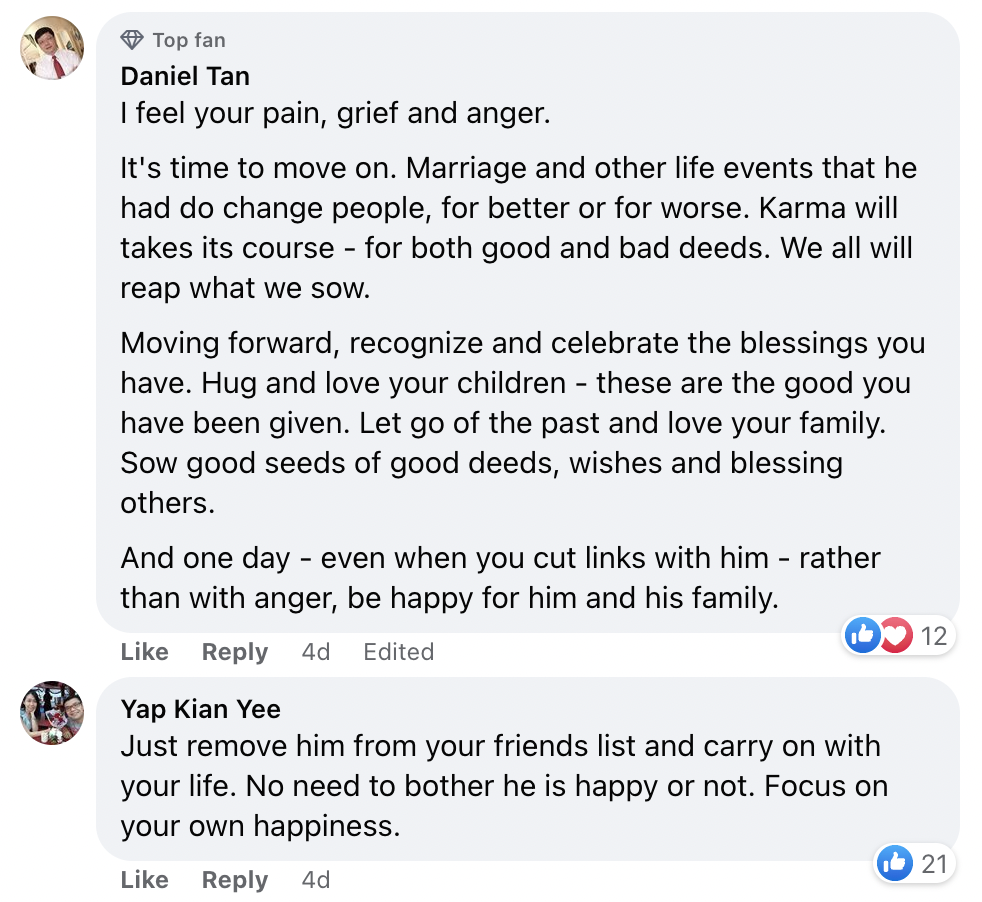 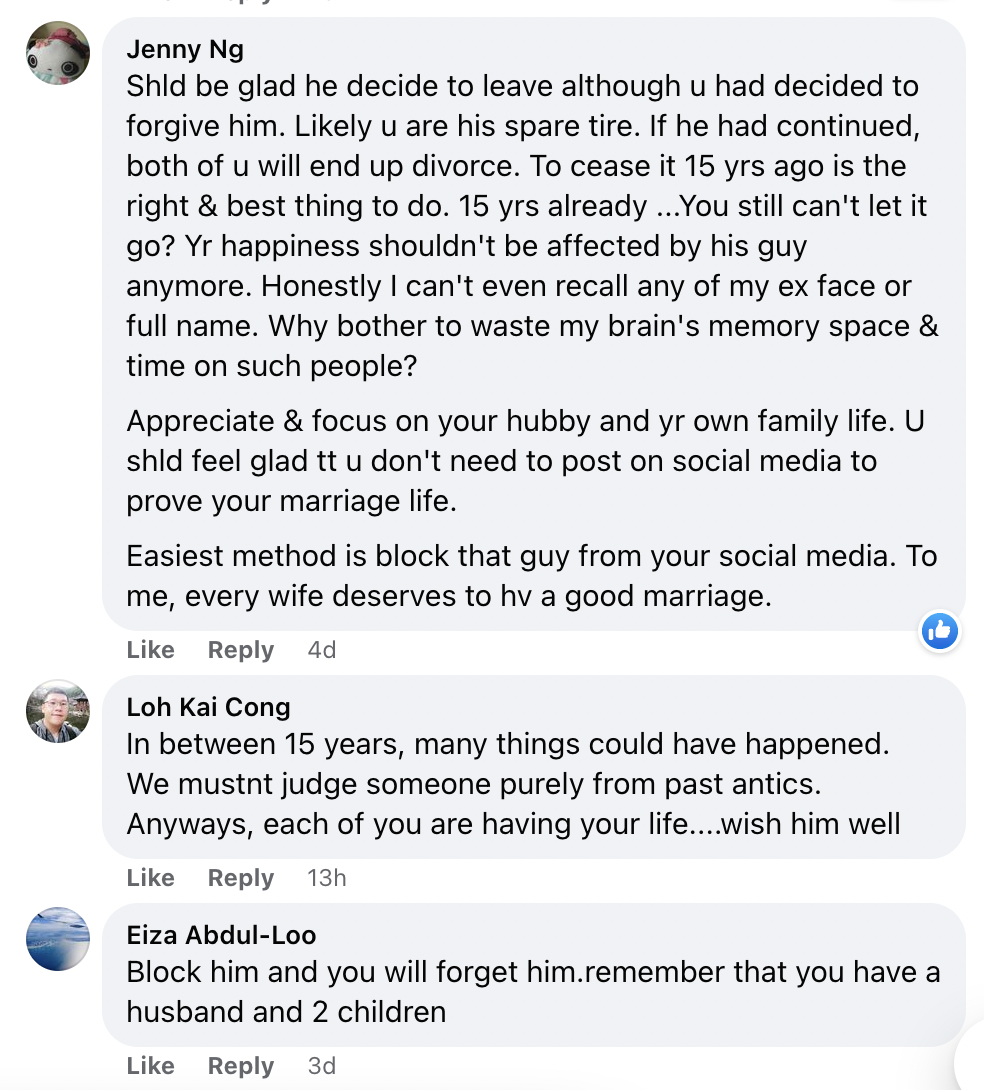 Earlier this year, a young college student wrote that she was confused and asked for advice about her situation with a senior student with whom she has a close friendship. The girl, a first-year student, has a friend who does army training, but admits she was in charge of the senior, whom she describes as “my ideal type of man.”

“He’s always by my side when I’m feeling depressed (sic), cheer me up with magic tricks. Even though he knew I was already attached, he continued to shower me with affection and love. Instead of rejecting him, I led him further by asking him to hug me when I’m sad. Kiss him on the cheek as he sent me back home.”

The young woman argued that she is not cheating on her boyfriend “as long as I am not having sexual activity with” the senior student. She added that she told the senior that “the chances are very slim” that she will become his girlfriend.

“However, he gave me a shocking answer that touched my heart deeply and brought me to tears… he is not willing to abandon a vulnerable girl like me. He wants to stay by my side to protect my vulnerable heart until the day I don’t need him anymore When that day comes he will cut off all contacts from me to tend to his emotional wounds,” the girl wrote, adding: “I’m confused now, what should I do?”

“How is this not cheating?” – Netizens ask girl who says she’s not cheating on her boyfriend because she’s not having sex with another senior even though she’s only hugging and kissing him