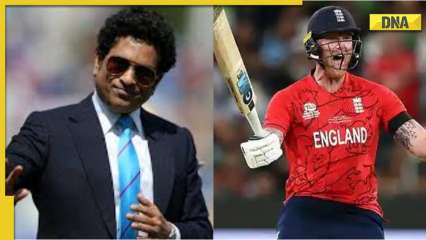 Jos Buttler decided to let his opponents take the lead first. Led by Sam Curran and Adil Rashid, the English bowlers were right on the money, limiting the Asian giants to just 137 runs from their allotted 20 overs.

However, the chase was no easy task as Shaheen Shah Afridi had Alex Hales left in the very first. Jos Buttler somehow kept the ship stable, despite being bothered by Naseem Shah.

England would then lose both Buttler and Phil Salt and were in trouble. Ben Stokes, however, produced another calm and patient innings to get them through the tricky patch.

Immediately after the victory, many prominent personalities, including former international cricketers, congratulated them.

The Indian legend congratulated Buttler and his team on winning their second T20 World Cup. Tendulkar said the final was a hard-fought one and it would have been more interesting if Afridi had been on the pitch and not injured.

It was a hard-fought final and would have been even more interesting had Afridi not been injured.

Even Pakistan captain Babar Azam also believed that Afridi’s injury was the turning point in the match.

“We came up 20 runs short, but fighting to the last over was unbelievable. Our bowling is one of the best, but unfortunately Shaheen’s injury cost us a different result, but that’s part of the game,” Azam said.