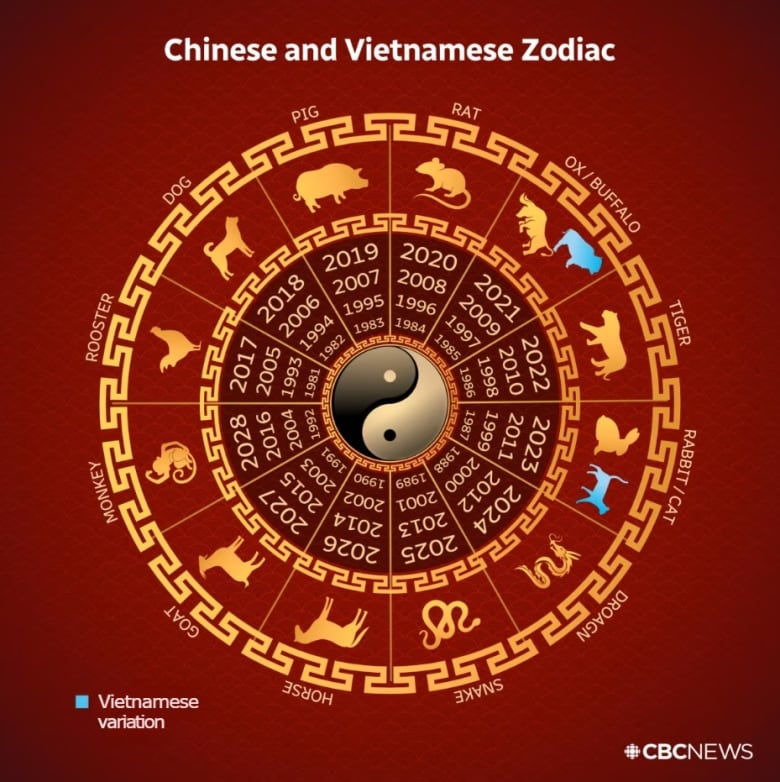 Vancouver mom Kim Phan Nguyễn-Stone says she’s excited about celebrating the Lunar New Year with her family starting this Sunday, but she’s dismayed by the red-and-gold decorations on the streets marking the Year of the Enter Rabbit.

Nguyễn-Stone is one of many Vietnamese Canadians who witnessed the arrival of Tết Quý Mao (Year of the Cat), but don’t think the celebration of the diversity of the Lunar New Year extends to the Vietnamese calendar.

Like the Chinese, the Vietnamese lunar calendar runs on a 12-year cycle, with each year corresponding to a zodiac animal.

But the two cultures have developed somewhat different setups of astrological signs. While the Chinese have the ox as the second sign and the rabbit as the fourth, the Vietnamese have the water buffalo and cat instead.

There are numerous folk theories as to why the Vietnamese calendar has a cat instead of a rabbit. According to professor of religious studies at the University of Tennessee Megan Brysonone explanation is the Chinese astrological term for rabbit, mǎo (卯), was misinterpreted as meo (“cat” in Vietnamese) when ancient Vietnam adapted the Chinese zodiac.

The latest census data shows that the number of people of Vietnamese descent has grown by 14.5 percent across Canada between 2016 and 2021, a higher rate than people who identify their ethnic origin as Chinese (–3 percent) or Korean (9.8 percent). percent), another Asian community commemorating the Year of the Rabbit.

But the growth of the Vietnamese population has not translated into more recognition. In recent weeks, hundreds of Vietnamese in Canada, the US and beyond have taken to social media — such as Subtle Viet Traits, a Facebook group subscribed to by more than 110,000 members — to express their frustration that the wider community seems unwilling to acknowledge the Year of the Cat.

Group member and resident of Victoria James Le (Lê Đức), who like his parents was born in the Year of the Cat, says the zodiac animal is an important part of their identity and he expects other people to respect it.

“[If other people] when you see the normal western zodiac signs you can imagine seeing yourself as, say, a capricorn, but then you see a different name for it, that throws you off a bit,” he said.

Le says he hopes public organizations and private companies can honor Vietnamese culture in the future.

WATCH︱James Le marks the Year of the Cat with his mother’s gift of a cat figurine:

The Vietnamese Lunar New Year celebrates the year of the cat

The Vietnamese community in BC is spreading awareness about the animal they celebrate this Lunar New Year: the cat.

But business professor Wootae Chun of the University of Northern British Columbia in Prince George, who specializes in cross-cultural marketing, argues that for this to happen, Vietnamese community associations across Canada must actively promote their culture to decision-makers in the private and public sectors through better social media strategies.

“Once you make them feel the importance of the cultural differences [between] Lunar New Years of the Cat and Rabbit, they’ll try to apply those cultural meanings to their decision-making process,” Chun said.

Nguyễn-Stone says that as a second-generation Canadian with limited proficiency in Vietnamese, she does her part to pass on her Vietnamese heritage by teaching everything she knows about the culture to her three children.

“If I don’t, they won’t really learn as much as they could.”

At the coast6:43Vietnamese communities celebrating the Year of the Cat.

Vietnamese Canadians James Le and Kim Nguyen-Stone, and Wootae Chun, a professor at the University of Northern British Columbia, spoke to TBEN digital journalist Winston Szeto about how Vietnamese zodiac animals can differ from Chinese and Korean animals.