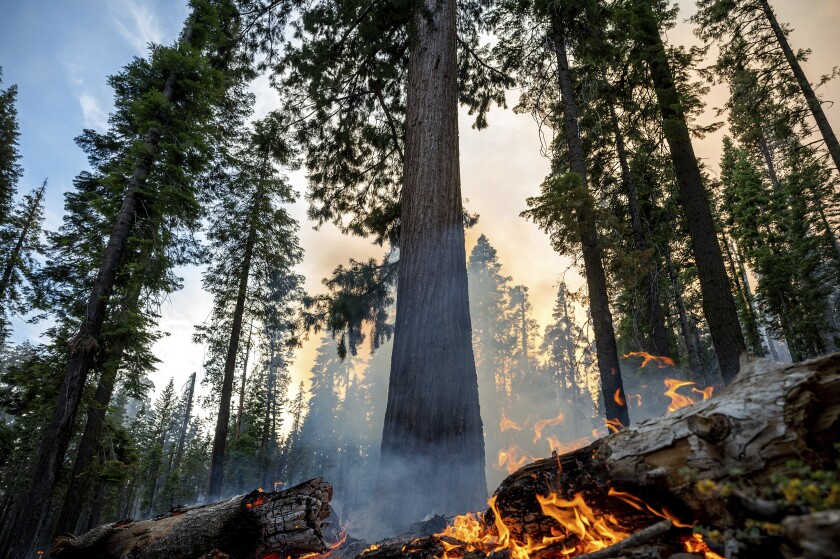 After nearly a month of closure, Yosemite National Park’s famed Mariposa Grove of giant redwoods reopened to the public this week, drawing hundreds of people who gathered to celebrate the towering trees’ survival after they were threatened by wildfires.

The 4,886-acre Washburn fire, which posed a threat to the forest’s 500 mature redwoods, was 100% under control, Yosemite ranger Scott Gediman said, although some firefighters are still cleaning up and putting out hot spots. The crews will likely remain in the area for about another week or two, Gediman said.

Only a few trails in the forest remain closed, including the Washburn trail, the western portion of the perimeter trail and the trail from Mariposa Grove to Wawona, but the most popular trails are open Wednesday, Gediman said.

“There are certainly indications that there has been a fire. If you’re a visitor and you drive up, you’ll see the burnt area between the depot and the bush, but once you get to the bush and go up, everything’s great,” Gediman said.

The Washburn fire ignited July 7 along a wooded trail in Yosemite National Park, initially sparking fears of an environmental disaster, threatening the forest’s ancient trees. However, firefighters were able to attack the blaze early on, with no damage to structures or injuries, and major damage to the forest was avoided.

“I’ve witnessed dozens of fires in my career and this one was just phenomenal. I’ve never seen such an outpouring of support and care from visitors and firefighters,” Gediman said. “The whole region really came together to save Mariposa Grove .”

ALSO READ  FYI, there are 3 different types of feta. This is what you must try.

There are burn scars on some trees, but no redwoods have died, Gediman said. He also noted that because some of these trees are 2,000 to 3,000 years old and have seen many fires, it is difficult to determine which fire caused the scars.

Gediman went to Mariposa Grove early Wednesday to celebrate the reopening and said he had “one of the best days I’ve had in a long time.” He met a family from Utah, who made a special trip to Mariposa Grove on their last day in Yosemite, and families from all over the world, including France, Israel and England.

“It was just a real sense of relief, a sense of excitement and celebration,” Gediman said. “People were excited to see the Mariposa Grove and were a little relieved because they were concerned about the trees. ”

While walking the Grizzly Giant Loop with visitors—one of the most popular trails in Mariposa Grove—Gediman experienced what he called “the perfect alignment of everything.”

The group was left mesmerized when they encountered a jet-black-furred bear walking right next to a burn scar and around the trail for a few minutes before they left.

“It was an incredible and magical moment. I just thought to myself, ‘Oh my God, the… [visitors] be here on opening day, on the Grizzly Giant, and you’ve got a beautiful bear,” Gediman said. “For me, that was just perfect.”